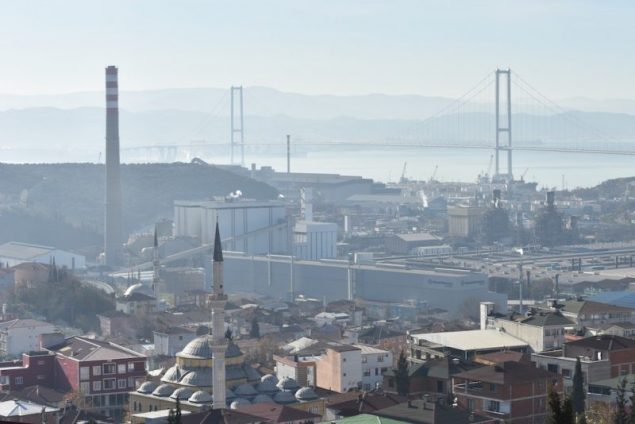 While the Turkish media is causing increasing anxiety among the public with its blanket coverage of Coronavirus, the health issues of people living in Dilovası, a small town in northwest Turkey, are being ignored. This is even though Dilovası has a cancer rate of 33.7 per cent, more than twice the national rate of 12.9 per cent, according to a 2018 report by the local branch of Turkey’s Chamber of Environmental Engineers.

Dilovası, a coastal town and accompanying district in Kocaeli province on the Sea of Marmara, is a 40-minute drive from Istanbul. Before chemical plants moved there from Istanbul in the mid-1970s, it was a rural area dominated by farming. Since then, industrialisation has picked up speed: Dilovası was made a township municipality in 1987, then a district municipality in 2008; its population is now 47,663.

Today a throat-itching, unpleasant smell welcomes you to the district, thanks to air pollution from its six industrial parks. The parks, known by their Turkish acronym OSB, are home to metal, coal and chemical plants and have made Dilovası a matter of national concern in Turkey for high cancer rates linked to pollution.

According to a 2018 report by the local branch of Turkey’s Chamber of Environmental Engineers, Dilovası has a cancer rate of 33.7 per cent, more than twice the national rate of 12.9 per cent. Locals say that they experience burning throats when they return home after spending a few days away.

“We’ve got used to the bad smell here,” said Erhan Karaçayır, who was born and raised in Dilovası. Karaçayır, who works in one of the plants, is married and has a young child. “Even though my kid is only six months old, we’ve been to the hospital four or five times already,” he says. “A six-month-old can’t breathe [here]. The doctors gave us sprays that open up the airways.” Karaçayır says that several of his friends have oxygen breathing machines at home.

Ahmet Demir, who grew up in Dilovası, also works in a factory there.

“In my childhood you could swim in Dilovası’s sea and eat fruit from its trees,” he said.

Today, he thinks, people’s health needs are being ignored “for profit”. He notes that he and many of his relatives suffer from upper respiratory diseases, adding, “There may have been huge investment opportunities but you need to have respect for human life.”

According to Karaçayır, who free dives in his spare time, a layer of pollution has also sunk to the bottom of the sea off the coast of Dilovası.

“That’s because of the waste the plants dump uncontrolled,” he said. “Our official complaints don’t lead to anything, so we take photos of what’s going on and share it on social media.”

In 2011, when he was head of the public health department at Kocaeli University, Onur Hamzaoğlu published an alarming report on the situation in Dilovası. His research found carcinogenic heavy metals in milk produced by mothers immediately after giving birth, and in the feces of newborn babies. In response, the mayors of Kocaeli and Dilovası, both members of the governing Justice and Development Party (AKP), prosecuted Hamzaoğlu for “creating fear and panic in society”.

Six industrial parks located in Dilovasi district cause air pollution. A cancer rate in this district is 33.7 per cent, more than twice the national rate of 12.9 per cent. (Credit: Ufuk Çeri)

Kocaeli University’s ethics committee also launched an investigationinto Hamzaoğlu. He was cleared of all charges, but then put on trial for criticising the government’s January 2018 military intervention in Syria, and spent six months in prison.

Pollution in Dilovası doesn’t only come from fumes and industrial waste. Locals believe that coal dust from the Kömürcüler OSB, built on the highest-altitude spot in town, is causing asthma. Most of the coal processed at Kömürcüler is imported by sea, from Colombia, South Africa, Australia, Russia and elsewhere. Dust is produced as the coal is washed, sifted and packaged for distribution across Turkey, and settles on the neighbourhoods around the industrial park.

The main opposition Republican People’s Party (CHP) and the pro-Kurdish People’s Democratic Party (HDP) frequently raise Dilovası’s environmental problems in parliament, but the government has not responded with any comprehensive plan for intervention.

Kerem Aydemir, Dilovasi Provincial Chair for main opposition republican peoples party, says that the AKP government repeatedly promised to close Kömürcüler OSB during last year’s election campaign but have not returned to the subject since.

“They won the election on that promise but nothing has changed,” he says. The district authority for Dilovası, which is run by the AKP, did not respond to a request for an interview.

The Dilovası Ecology and Health Association (EKOSDER), is one of several local organisations that campaigns on environmental issues. Its president İsmail Sami says that when EKOSDER was founded in 2005 it focused on pollution from an industrial park on the coast, before expanding to other areas, and that their work has helped reduce air pollution.

“The plants took precautions thanks to our press releases and protests,” he said. “But we’ve been going backwards recently. We’ve been finding factory waste and [noticing] weird smells in the streams again.”

Sami notes that the worst environmental damage is caused by iron and steel plants. “They need to ban iron and steel for us to have clean air in the district,” he said. “If there’s going to be industry here it needs to be limited to storage and logistics centres.” According to Sami, Kömürcüler OSB was built close to the centre of town to reduce transportation costs, without taking public health into account. 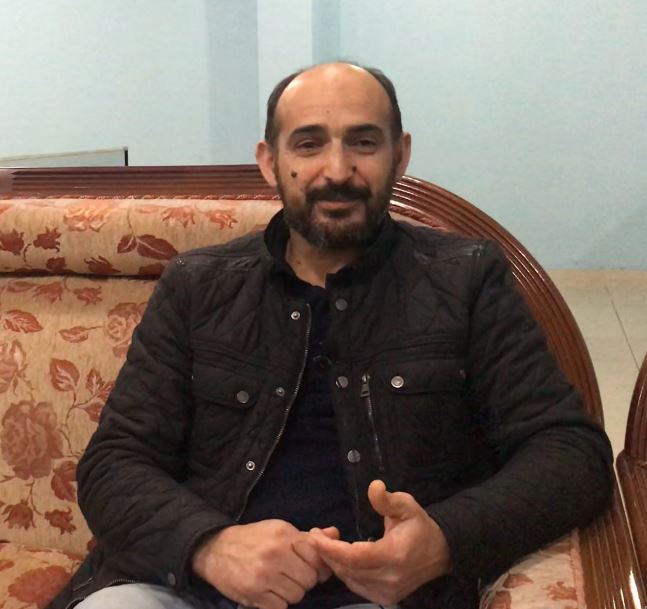 President of the Dilovası Life Association, Vezir Kocabay, points out that people in Dilovası aren’t against industrialisation, but their health must be protected. (Credit: Ufuk Çeri)

Another organisation, the Dilovası Life Association, was founded in July 2019 with the aim of giving the district’s environmental problems greater public prominence and prompting the authorities to take action. But according to its president, Vezir Kocabay, no such action has been forthcoming even though the matter was raised in parliament.

People in Dilovası aren’t against industrialisation, Kocabay says, but it “needs to be like it is in Europe. It needs to value human life and not hurt people.” Kocabay, who has lived in the area for 40 years, says the district also suffers from noise pollution. “We don’t want to open our windows, not even in summer,” he continued. “But although we don’t like it, we live here because we have to.”

Ufuk Çeri gained a degree in journalism before working as an expert on labor rights in several workers’ unions. Since resuming his career as a journalist, Ufuk has been working as a reporter and video-producer for Turkey’s well-known digital news platform MediaScope. Ufuk’s work is focused mainly on workers’ rights, alternative economy, and socio-cultural issues.

An interview on Turkey Book Talk: Zeynep Şentek on the environment, public health and politics in Dilovası, a heavily polluted industrial district near Istanbul. Şentek is among the reporters of a recent Black Sea.EU article on a “public health disaster zone” where dangerous chemicals are belched into the air, cancer rates are reportedly above average, and locals suffer from severe respiratory conditions.