Is Evo Morales’s Bolivia next in Trump’s firing line? 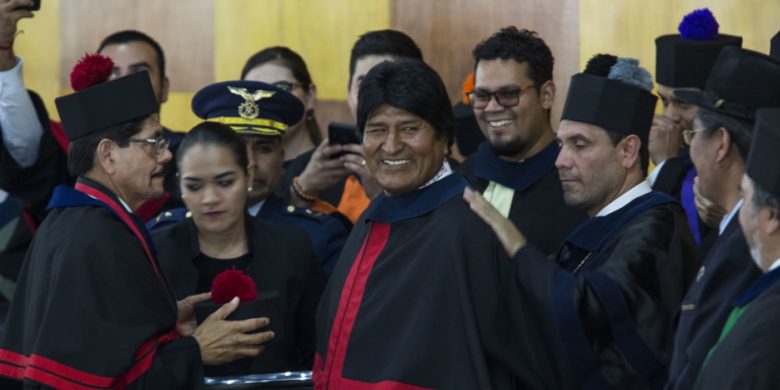 “We need to stand by Bolivia’s progressive government led by Evo Morales and celebrate its achievements,” writes Chris Williamson MP

CUBA has been blockaded by the United States for nearly 60 years; Venezuela is battling against a raft of US sanctions choking its economy; and Nicaragua is expecting imminent US legislation blocking loans and requiring it to override its constitution and hold early elections. Is Bolivia, and Evo Morales’s socialist government, next in the US’s firing line?

The US has made no secret of its hostility to Morales, dating back to before his successful presidential election victory in 2005. This replaced a neoliberal regime in hock to foreign, mostly US, corporations while 75 per cent of the rural population lived in extreme poverty.

As Bolivia’s first indigenous leader, Morales’s election held great significance for the country’s indigenous peoples, who make up over 60 per cent of the population.

Fundamental to the advances made in Bolivia has been Morales’s fulfilment of a campaign promise to rewrite the constitution to give more power to the indigenous majority.

The new constitution redefined Bolivia as plurinational in all aspects of social life, granting new rights to the country’s 36 indigenous groups. By 2011, 90 of the 166 elected National Assembly representatives were drawn from their ranks.

Morales has also implemented a variety of state-funded social programmes which have dramatically reduced extreme poverty, from 38.2 per cent in 2005 to 16.8 per cent in 2016.

Poverty has declined from 60.6 per cent of the population to 38.6 per cent over the same period, helped by increases in the minimum wage.

Two million children benefit from the Juancito Pinto programme directed at increasing school attendance and reducing child labour, while health and nutrition programmes reduced infant mortality from 50 to 24 per thousand live births between 2009 and 2017.

Some 900,000 Bolivians over 60 years old who would otherwise receive no pension now receive a payment, while disabled people and those incapacitated now receive a monthly payment and guaranteed job placement in public and private institutions.

In total, more than 4.8 million Bolivians — in a country of just over 10 million — benefit from these and other social programmes.

To invest in these reforms, Morales has acted to recover Bolivia’s wealth from foreign corporations by nationalising key businesses and assets.

In bringing the country’s oil and gas under state control, he declared: “The time has come, the awaited day, a historic day in which Bolivia retakes absolute control of our natural resources … The looting by the foreign companies has ended.”

As a result, over 10 years Bolivia gained $31.5 billion to invest in development and infrastructure, compared to the $2.5bn received during the previous decade of neoliberal policies.

Land ownership has also been transformed, through land transfer to indigenous communities, recovery of illegally occupied land by large landowners and expropriation of land underutilised or worked by forced labour.

Some 46 per cent of those receiving land titles in this process have been women, and smallholders now control 55 per cent of all land. Ongoing support for small producers is enabling the country to become self-sufficient in food.

Using organisations such as United States Agency for International Development (USAid) and the National Endowment for Democracy (NED), the US has sought from the earliest days of Morales’s presidency to destabilise the country, particularly by openly supporting the autonomy of certain regions, such as Santa Cruz, Beni, Pando and Tarija, promoting separatism with the intention of weakening the national government.

Bolivia has also clashed with the US over the work of the US Drug Enforcement Administration (DEA).

In November 2008 Morales expelled the DEA, arguing that it had committed human rights violations — including covering up murders — and was routinely targeting politicians and movement leaders who challenged the US’s neoliberal agenda. In 2011 he also expelled USAid, accusing it of funding NGOs working against the nation’s sovereignty.

He has also consistently defended Venezuela against the threat of US intervention, saying for example in 2018: “Geopolitics and oil energy, that’s what the empire is looking for in Venezuela — first overthrow, then dominate and later take control of Venezuela’s oil … the pretext is the same as always, democracy, human rights, terrorism.”

With presidential elections coming up in 2019 in Bolivia, further efforts by the US to attack Morales, who is standing again, can be expected.

Indeed, US Congresswoman Ileana Ros-Lehtinen earlier this year asked US Congress women to join efforts to prevent Morales from running for the 2019 presidential elections and has also attacked his presence on the UN security council, saying “Morales has actively worked against US and regional security interests.”

In light of these developments, the Morales government is seeking political alliances with other governments and progressive social movements around the world, to defend itself and strengthen global forces for change. At this crucial time, the country needs our solidarity and support.