Any Canadian who tries to defend human rights for Palestinians knows that they run the risk of being called “anti-Semitic”.  But when Prime Minister Trudeau called out Dimitri Lascaris, a well known Palestinian human rights activist, accusing him of “vile anti-Semitic smears”  a lot of people took notice. Is Lascaris guilty as charged, or is he being unfairly smeared by the Prime Minister?

Human rights activist and lawyer Dimitri Lascaris has been a thorn in the side of the Canadian political establishment for some time, particularly on the issue of human rights for Palestinians.

Some would characterize his style as “brash” or “in your face”. Lascaris had a bitter falling out with Elizabeth May over her refusal to back a Green Party resolution to support BDS, and he has accused NDP leader Jagmeet Singh of derailing a different resolution critical of Israel at the recent NDP convention. He has been involved in legal battles against Canadian Zionist organizations like Bnai Brith, and even taken the Canadian government to court over its continued practice of allowing goods made in the Occupied Palestinian Territories to enter Canada labelled as “Made in Israel.”

But he really stirred up a hornet’s nest a few weeks ago by a tweet in which he challenged Liberal MPs Anthony Housefather and Michael Levitt over the fact that they seemed more interested in defending Israel than in defending Canada.

Prime Minister Trudeau immediately responded by sending a tweet of his own, denouncing what he called Lascaris’ “vile anti-Semitic smear”. 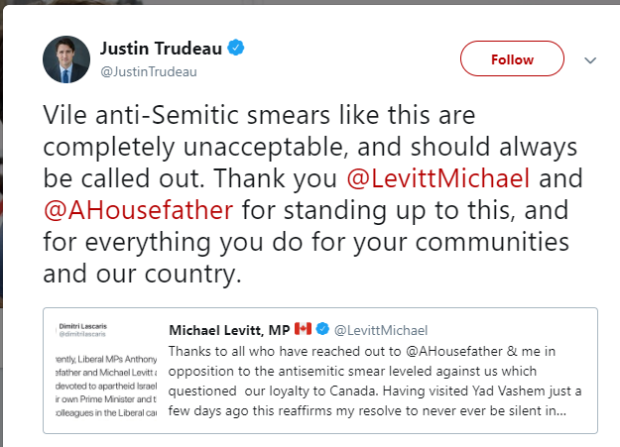 All other party leaders, including Jagmeet Singh, Elizabeth May and Andrew Scheer jumped in with comparable condemnations of Lascaris’ tweet.

On the eve of the Jewish New Year, Shimon Fogel, head of the Centre for Israel and Jewish Affairs (CIJA), wrote an alarmist memo to all his members:

“Events over the past 72 hours have sharply exposed some of the difficulties and opportunities our community faces.” he wrote. “On Thursday, Dimitri Lascaris tweeted an appalling attack on two Jewish MPs, Michael Levitt and Anthony Housefather. He openly suggested that Michael and Anthony are disloyal to our country, placing the interests of “apartheid Israel” above those of the Government of Canada. This is a textbook example of antisemitism.”

Sensing blood, Bnai Brith and CIJA have even pressed forward the idea that MP’s should boycott Lascaris as well as any delegations from Canadians for Justice and Peace in the Middle East, a pro-Palestinian group which Lascaris chairs, as long as he is associated with it.

Is it ever acceptable to accuse an MP of being more loyal to a foreign government than to Canada? In fact, such calls are not all that infrequent. MP’s are routinely challenged over conflicts of interest when they take trips on the dime of foreign governments. Recently such questions were raised in the case of MP’s who took free trips to China. And many Canadians argued that former Prime Minister Stephen Harper sabotaged our chance at a seat on the UN security council by putting Israel’s interests ahead of Canada’s.

However, the fact that Housefather and Levitt are Jewish make the charge a sensitive one, as historically anti-Semites have used the allegation of “disloyalty” as a way to attack and undermine Jews. Lascaris should have known this. His ad hominem attack on their motives and loyalties may have been heavy handed, and injudicious. But anti-Semitic?

Lascaris was interviewed by Bernie Bellan, Editor of The Jewish Post and News in Winnipeg a few days after Trudeau’s tweet. The video of the interview is available here: What did Dimitri Lascaris do to elicit unanimous condemnation from Justin Trudeau, Andrew Scheer, & Jagmeet Singh? Lascaris stoutly defended his tweets, claiming that he is not anti-Semitic and that his issue is not with Jews, but with Canadian policies which support Israel.

A review of Lascaris’ website shows over a hundred blog posts going back to January 2017. Two repeated themes come back over and over – Trudeau’s inadequate response to climate change, and human rights for Palestinians. Ditto for his very active Facebook Page.

He is a very vocal advocate of BDS, the movement to boycott Israel over its treatment of the Palestinians, and very critical of both Elizabeth May and Jagmeet Singh for not endorsing it. But I could find no whiff of any animus against Jews. So, unless harsh criticism of Israel is automatically labelled anti-semitism, it would be very difficult to establish a pattern of anti-Semitism. 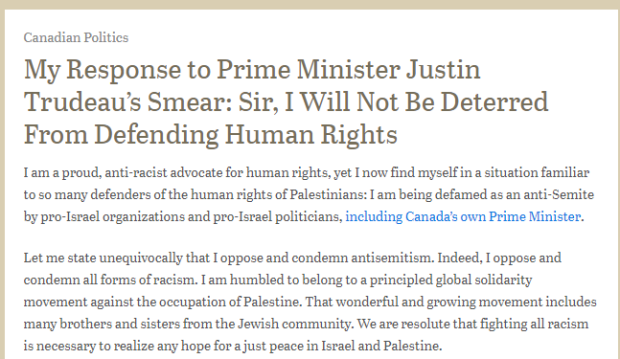 What have we learned?

While his tweet may have been insensitive, any intimation that Lascaris himself is anti-Semitic appears to be ill informed and perhaps even politically motivated. It would appear that a number of political leaders who have been sharply criticized by Lascaris in the past are not willing to come to his defense in the face of Trudeau’s attack.

The incident also shows the powerful capability of the Israel lobby (including CIJA and Bnai Brith) to wrong foot a well known Canadian defender of human rights for Palestinians. Their deep connections to all political parties – including the Prime Minister – allows them to quickly gain advantage by playing on the fears of Canadians that criticism of Israel might be motivated by a barely hidden anti-Semitism.

This incident reinforces CTIP’s contention that activists hoping to move Canadian policy towards human rights for Palestinians need to be extremely careful in their choice of actions and words. In particular, we need to recognize how easily the fears of Canadian Jews (and indeed of all Canadians) can be exploited. While some Canadians might feel that those Jewish fears and Jewish sensitivities have been exaggerated, and indeed even manipulated, they are real nonetheless, and need to be taken into consideration.

CTIP’s motto is “raise the issue while lowering the temperature”.  Harsh words only serve to heighten the sense of insecurity and reduce the possibility of reasonable dialogue.