Is Canada’s ambassador to Israel an anti-Palestinian racist? 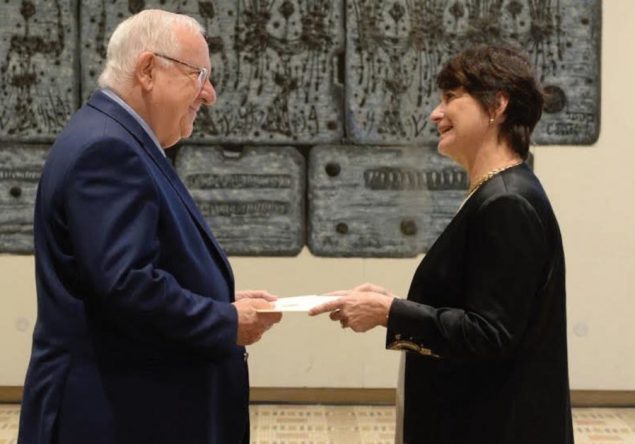 Dimitri Lascaris examines in detail at the CIJA’s dealings with Canada’s ambassador to Israel, Deborah Lyons.

The Center for Israel and Jewish Affairs (CIJA) is one of Canada’s most active and influential lobby groups.

As part of an investigation into CIJA’s reach and influence, I recently sent an Access to Information and Privacy (ATIP) request to Global Affairs Canada (GAC). In that request, I sought production of all GAC briefing products and memos for the use of Canada’s Minister of Foreign Affairs or Ambassador to Israel that relate to CIJA and that were generated from December 1, 2015 to the time of my request.

In Part I of my analysis of the documents I received in response to that request, I focused on dealings between CIJA and Canada’s Foreign Minister, Chrystia Freeland.

In this part, I focus on CIJA’s dealings with Canada’s ambassador to Israel, Deborah Lyons.

Is Deborah Lyons ‘Balanced’ on Israel/Palestine?

Lyons is a career diplomat. After serving as the Deputy Head of Mission at Canada’s embassy in Washington, D.C., Lyons served as Canada’s ambassador to Afghanistan. In July 2016, shortly after assuming power, the Trudeau government appointed Lyons as ambassador to Israel.

Lyons replaced Vivian Bercovici, a fanatical Zionist whose fawning attitude toward the Netanyahu government complemented the fanatical Zionism of Stephen Harper, the Prime Minister under whom Bercovici served.

According to Ferry De Kerckhove, a former Canadian envoy to Indonesia and Egypt, the Trudeau Government’s appointment of Lyons to the post of ambassador to Israel signalled “a return to normal diplomacy.” De Kerckhove told the Globe and Mail that Global Affairs would be feeling “total, total elation” to see Bercovici ‘yanked out of Israel’ before her normal three-to-four-year term was up. “In a way, she became the mouthpiece of Netanyahu” he said. “She showed no balance at all.”

For some time, I have followed closely Lyons’ public commentary on Israel/Palestine. Having done so, the last word I would use to describe her behaviour as Canada’s ambassador to Israel is “balance.”

So far this year, Lyons has issued 423 tweets and retweets. In those tweets:

For decades, the Canadian government has acknowledged that Israel’s West Bank settlements violate the Fourth Geneva Convention and are a “serious obstacle” to peace. Despite near-universal condemnation of Israeli settlements, the Netanyahu government continued in 2019 to expand Jewish-only settlements and vowed to annex large portions of the West Bank where Israeli settlements are situated. Annexation would constitute a flagrant violation of international law.

Yet Lyons’ one tweet that was modestly critical of Israel’s government did not relate to the settlements, annexation or Israel’s wanton murder and maiming of Palestinian civilians in Gaza and the West Bank. Rather, that tweet was an expression of the Canadian government’s purported ‘regret’ that Israel had unilaterally terminated the mandate of a temporary observer force in the Palestinian city of Hebron, where Israel is brazenly committing the crime of apartheid.

Yet Lyons’ tweets are utterly bereft of concern for Israeli violence against Palestinians.

Quite apart from her grossly unbalanced Twitter commentary, Lyons disgraced herself last year after an Israeli sniper shot Canadian-Palestinian doctor Tarek Loubani and eighteen other Palestinian medical personnel in Gaza.

Within days of those shootings – which also constituted war crimes – Lyons travelled to Toronto to tell an audience of Israel supporters how much she adores the state of Israel:

Deborah Lyons and the GAC Documents

The GAC documents I received in response to my ATIP request shed further light on the attitude of Canada’s Israel envoy to the plight of the Palestinian people. Those documents include a January 19, 2018 briefing document addressed to Lyons and entitled “CIJA Visit of Parliamentarians to Israel and the West Bank.”

The second page of that briefing document contains numerous redactions which may conceal information that could embarrass the governments of Israel and Canada were the information to be disclosed publicly.

For example, one bullet point on that page is redacted as follows “___________ but strong democracy.” The term “but” suggests that the redacted language is, in some sense, critical of Israel.

Also, an entire line under the heading “PEACE PROCESS” is redacted.

Notably, the second page of that briefing document describes Israel’s economy as being characterized by “big inequalities”: 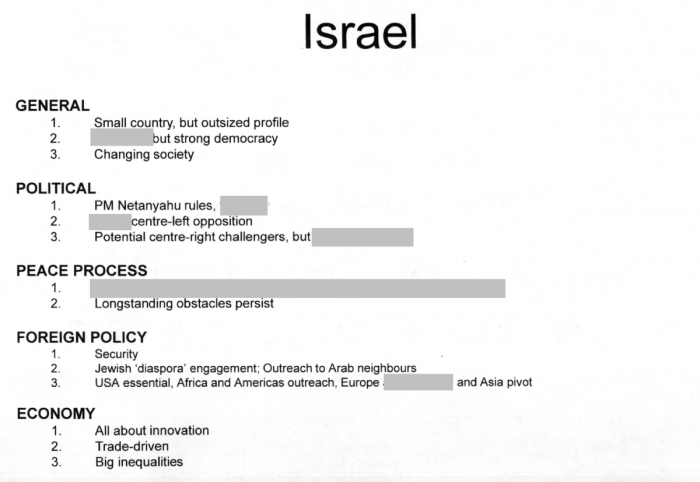 The briefing document’s claim that Israel is a “strong democracy” is, of course, utter nonsense. Millions of Palestinians living in occupied territory have spent their entire lives under Israeli government rule, but have been deprived of the right to vote in Israeli elections.

The January 19, 2018 briefing document also highlights the extent to which Canada’s political and military elites engage with their counterparts in Israel. Under the heading “Canada-Israel Relations – Political/Cultural”, the document states:

Finally, the January 19, 2018 briefing document leaves no doubt as to the commitment of Canada’s embassy in Israel to strengthening political, economic and cultural ties between the two states. The last page of the document states: 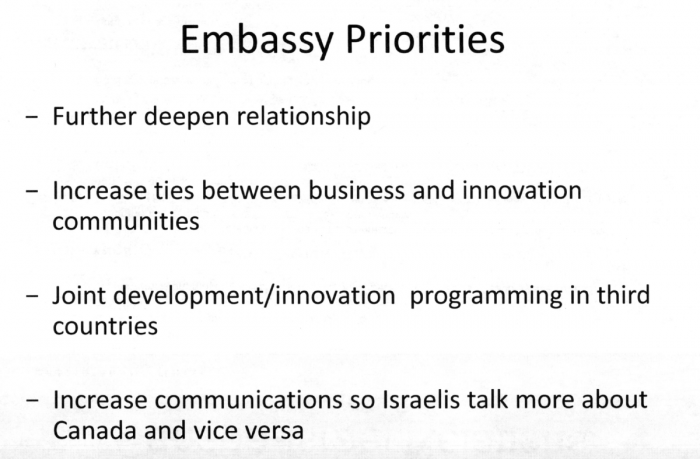 Nowhere in the January 19, 2018 briefing document is there the slightest hint of sympathy for the suffering and oppression of Palestinians.

Racism can reveal itself in many ways. The most obvious manifestations of racism include explicitly derogatory commentary directed at members of an ethnic group.

But racism is not always so recognizable, especially in contemporary Western societies, where the expression of overtly racist sentiments can lead to loss of employment, social ostracization and, in extreme cases, criminal liability.

In such societies, racism often reveals itself in more subtle ways.

Today’s Western racists often confine themselves to implying by their words and deeds that the lives of certain ethnicities have less value than the lives of others. These racists – and there are many to be found in the halls of power — generally do not consider themselves to be racist. Some of them achieve positions of considerable prestige and authority, believing all the while that they are true champions of equality.

Yet, when their deeds and words are scrutinized carefully, the only conclusion one can rationally draw is that they attach little if any value to the lives of certain ethnicities – in other words, that they are racists.

Based on the record of Canada’s ambassador to Israel, the question must now be asked: is Deborah Lyons an anti-Palestinian racist?