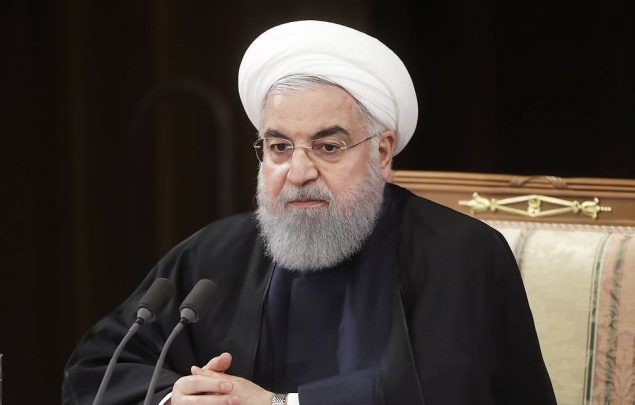 In Rouhani’s words: “under a ‘pandemic’ situation, Tehran, Paris, London and Washington are not far apart”

Iranian President Hassan Rouhani has called upon the US public to influence their government’s policies and press for the removal of sanctions against the Islamic Republic amid the novel coronavirus outbreak.

“In the name of justice and humanity, I address your conscience and Godly souls, and call upon you to make your Administration and Congress see that the path of sanctions and pressure has never been successful and will never be so in the future,” Rouhani said in an open letter to the people of America, posted on his official website.

“The victims of the virus and the sanctions are ordinary Iranians from all walks of life and not the political elite,” he continued.

In Rouhani’s words, “under a ‘pandemic’ situation, Tehran, Paris, London and Washington are not far apart.”

“Any hostile actor seeking to undermine Iran’s health system and restricting the needed financial resources to tackle the crisis, will undermine the fight against the ‘pandemic’ all over the world,” he added.

“US administration gleefully takes pride in killing Iranians citizens on Nowruz – our New Year,” the Iranian top diplomat said on Twitter. “The White House takes its ‘maximum pressure’ to a new level of inhumanity with its utter contempt for human life.”

“Iran to US: Your policy will live in infamy. But Iran won’t break,” he added.

According to Zarif’s website, the Iranian top diplomat had a phone conversation with UN Secretary General Antonio Guterres, in which the UN chief reaffirmed the need to have US sanctions on Iran lifted.

“In the conversation, United Nations Secretary-General Antonio Guterres expressed solidarity and sympathy with the Iranian nation, and stressed the need for the removal of the US sanctions against the Iranian nation for the fight against coronavirus,” the foreign ministry statement says.

“Foreign Minister Zarif, for his part, appreciated the stances adopted and the assistance provided by the institutions affiliated with the United Nations, and highlighted the need to abolish the inhumane, cruel, illegal and unilateral sanctions the US has imposed against people of Iran,” it says.

In the past week, the United States announced several rounds of Iran-related sanctions, blacklisting five Iranian nuclear physicists and several companies from Hong Kong, UAE, China and South Africa for allegedly cooperating with Iran in the oil sphere.

Iranian authorities have repeatedly said that US restrictions against Tehran complicate the country’s fight against the disease. On March 16, Chinese Foreign Ministry spokesman Geng Shuang claimed that unilateral sanctions of the US against Iran amid coronavirus spread would only exacerbate the situation.

Meanwhile, Russian Foreign Ministry said that the US deliberately takes actions that thwart Iran’s fight against the infection.

The ongoing coronavirus outbreak was registered in central China in late December 2019. On March 11, the World Health Organization declared it a pandemic. COVID-19 infection cases have been recorded in more than 150 countries and territories. According to the latest data, over 260,000 people have contracted the virus; about 11,000 of them have died. Iran has been among the worst affected countries, with at least 19,644 confirmed cases and 1,433 deaths.