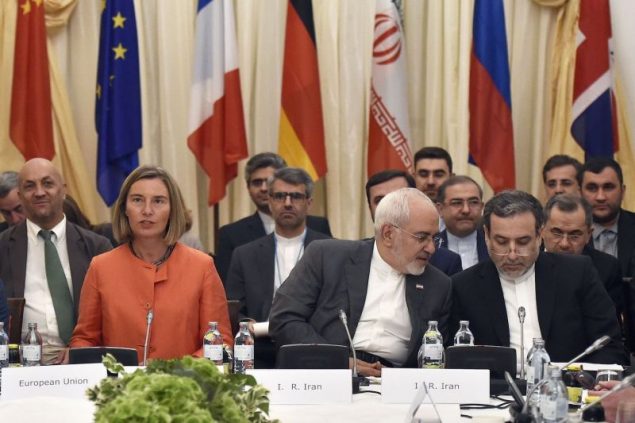 Iran’s decision to surpass uranium enrichment limits isn’t a dangerous provocation. It’s a calculated effort to get European leaders to reinforce the nuclear deal and halt the drift toward war.

The agreement as negotiated by diplomats was backed by scientists and the consensus of the global foreign-policy community because it both solved the discreet problem of the potentially offensive nature of the Iranian nuclear program and de-escalated the U.S.-Iran relationship that has been on a short fuse since the U.S. Embassy hostage crisis of nearly 40 years ago.

Since last May, the nuclear deal has been on life support, hanging on in large part due to the commitment of its European signatories, who are loath to see further destabilization of the Middle East or unraveling of a painstakingly negotiated multilateral nonproliferation agreement. Now, after more than a year of strangulating U.S. sanctions and growing tensions in the Persian Gulf—attacks on tankers, the downing of a U.S. drone, and retaliatory U.S. strikes on Iran that Trump canceled only at the last minute—Iran is starting to contravene its commitments under the nuclear deal.

Tehran is now exceeding the allowed limit of its stock of low-enriched uranium because no country dares to import the excess material (as provided for in the 2015 deal) out of fear of U.S. sanctions and Iran is no longer prepared to dilute it by blending it with raw material.

While this may sound concerning, there is no reason to panic from a nonproliferation perspective. That’s because Iran cannot turn its low-enriched uranium into weapons-grade material without going through several detectable steps.

It first would need to produce four to five times more uranium hexafluoride in gaseous form to have enough material (including waste) for a single weapon. It then would have to reconstitute the centrifuges, which spin at supersonic speeds to separate and increase the percentage of the rarer uranium-235 isotope.

Tehran dismantled two-thirds of these machines under the deal. It would have to rearrange them in cascades that would allow enrichment of the uranium up to weapons-grade level and would have to spin them for several months. As long as the deal remains in place, the IAEA’s robust inspection regime guarantees that U.N. inspectors will be able to detect any such Iranian activity, even if they try to do so covertly.

Iran’s violation of one of its less consequential commitments under the deal should be seen for what it is: a calibrated response to compel the remaining deal signatories (Europe, Russia, and China) to counter the U.S. “maximum pressure through sanctions” campaign, just as was its downing of an unmanned drone. But it also should be seen as a warning shot, a signal that should economic pressure remain, Tehran is likely to up the ante and accelerate its nuclear program.

Iran’s logic seems straightforward: If its leaders ever agree to negotiate with an administration that is holding a gun to their heads, they will do so only after first having restored their leverage by partially resuscitating its nuclear program. In short, the risky gambit implies any path to negotiations risks passing through another perilous nuclear standoff.

Leaders in Tehran and Washington could quickly lose their grip on the situation. It is becoming increasingly obvious that the Trump administration will not return to the status quo ante of a functioning nuclear deal and that Trump has backed himself into a corner where his only options appear as either military strikes or backing down from his maximum pressure campaign at the expense of his credibility. It should not come as a surprise if Iranian leaders decide to continue to respond by intensifying their belligerent actions in the region and the nuclear arena if the United States continues to asphyxiate their economy and issue military threats.

Today the world stands on the precipice of a war between the United States and Iran, one that would exact an enormous human toll, threaten long-standing strategic alliances, and undo the international nuclear nonproliferation regime. The latter risk relates to Iran’s threats that if it eventually withdraws from the deal, it will also abandon the Nuclear Nonproliferation Treaty, which is precisely what North Korea did before it built and tested nuclear weapons.

Just as a single bullet in Sarajevo launched Europe on the path to World War I, the Middle East today is experiencing its own 1914 moment, in which a single incident has the potential to cause a regional conflagration that could easily spin out of control. Both the United States and Iran appear to be on the cusp of making an extreme error in foreign-policy judgment. If the status quo continues, it could lead to an outcome for which thousands of troops and hundreds of thousands of innocent civilians might ultimately end up paying the price.

Iran’s violation of the deal by surpassing the low-enriched uranium threshold by a few kilograms is still easier to reverse than those violations committed by the United States after it reneged on its end of the bargain. The Trump administration destroyed the nuclear deal’s core element—nuclear restrictions and monitoring in return for sanctions relief. The fact that Iran had continued to adhere to the agreement thus far, despite the misery that Washington has inflicted on the Iranian people, has been surprising in light of hard-liners’ influence on politics in Tehran, many of whom strongly urged a more dramatic reaction to the reimposition of U.S. sanctions.

If Trump wants to avoid the war he says he does not want, he should change course. He could contemplate a package involving suspension of some U.S. sanctions, Iran reversing steps it has taken in contravention of the nuclear deal, and movement on U.S. citizens unjustly detained in Iran.

Europe has a key role to play, too. Iran’s breach has been measured—the goal is not to push Europe to walk away from the deal but was calculated to compel the Europeans to go the extra mile.

Europe’s reaction should be equally calibrated. It should double down on its support for the deal while warning Iran that there is a limit to its patience both on nuclear breaches and destabilizing the region. France, Germany, and the United Kingdom have just operationalized a special purpose vehicle, called the Instrument in Support of Trade Exchanges (INSTEX), aimed at facilitating humanitarian trade between Iran and Europe. Seven additional European countries have pledged to join it; others should do the same. Paris, Berlin, and London should also inject significant amounts of export credit into the mechanism to allay the concerns of European banks and firms, fearful of being penalized by U.S. sanctions. Political support also counts. A joint visit to Tehran by these countries’ foreign ministers could give the Iranian leadership a political win and buy them more maneuvering space.

Ultimately, leaders in Tehran and Washington should put aside maximalism, open their clinched fists, and start negotiating without precondition to find a mutually tolerable modus vivendi—recognizing that neither side can get all it wants but might be able to get some of what it needs. The alternative is a catastrophic conflict, the costs of which would be hard to fathom and the consequences of which will haunt the world for years to come.

Gérard Araud is the former French ambassador to the United States and the United Nations as well as director-general for political and security affairs of the French Foreign Ministry. He is a trustee of the International Crisis Group. Twitter: @GerardAraud

Ali Vaez is the director of Iran Project at the International Crisis Group and an adjunct professor at Georgetown University’s School of Foreign Service. Twitter: @AliVaez