Interview with John Helmer: On March 26 protests in Russia, and Kyiv gov’t attempts to ‘cleanse’ Ukraine of its Russian and Polish history 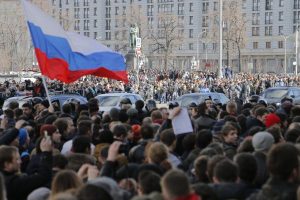 On a warm spring day on March 26, 2017, thousands of Moscow residents gathered to protest what they called rising corruption in the Russian gov’t (UPI photo)

The two discuss the economic situation in Russia, the ‘anti-corruption’ protests in Moscow and other Russia cities on March 26, growing economic disparities in Russia and concerns by the Russian people of the NATO threats against their country that escalated following the “putsch” in Kyiv in February 2014.

Helmer says that Western media and governments grossly misrepresent the political views of the Russian people, falsely creating the impression of widespread disatisfaction with the governing record of President Vladimir Putin. He also discusses the Western media silence over the grenade attack late on March 26 against the consulate of Poland  in the city of Lutsk in the Volnya region of western Ukraine. Tensions between Poland and Ukraine have been rising due to resurgence of the extreme-right in Ukraine and its identification with the World War Two record of collaboration by Ukrainian ultra-nationalists with the German Nazi occupiers of then-Soviet Ukraine.

He says that Canada’s government and Foreign Affairs Minister Chrystia Freeland have been recklessly contributing to the heightening of military tensions along Russia’s western borders. Freeland’s and Canada’s goal, and that of their allies, Helmer says, is to “cleanse” the east of Ukraine of Russian language people. He reminds listeners that some of Freeland’s forebears participated in attempts to ‘cleanse’ western Ukraine of Jews and Poles during World War Two.

Listen to the interview at the weblink above, beginning at the 37-minute mark.

The U.S. war has been good for President Putin, and the Russian economy looks stable through the 2018 presidential election. So if you are a U.S. warfighter, what is the regime change opportunity now?, published on Dances With Bears, March 23, 2017