Interview by Bob Garfield with Tarik Cyril Amar of Columbia University, concerning the Institute of National Memory in Ukraine and its director, Volodymyr Viatrovych. Interview broadcast on WNYC’s On the Media, May 20, 2016. Listen to the interview at the weblink, or you can read the transcript below.

During World War II and in the years following, certain Ukrainian nationalist groups are known to have carried out ethnic cleansing, both helping the Nazis as they exterminated Jews and committing mass murder of Polish citizens in Ukraine. These, historians agree, are the historical facts. But if the new head of Ukraine’s Institute of National Memory has his way, they may not be for long. 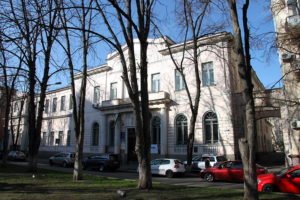 Headquarters of Institute of National Memory of Ukraine (Wikipedia)

Volodymyr Viatrovych is a radical historian and political activist who has spent the bulk of his career attempting to whitewash the uglier passages in Ukraine’s history in order to paint a more heroic picture of Ukrainian nationalists. As head of the Institute, and facing ongoing Russian anti-Ukraine propaganda, he has more influence than ever before, and has recently helped to pass a series of highly controversial “de-communization” laws that criminalize the denial of the legitimacy of Ukrainian nationalist groups, including those who carried out the known atrocities in World War II.

Tarik Cyril Amar is a historian and Professor of Russian, Soviet, and Ukrainian History at Columbia University. He is one of seventy scholars who signed an open letter to the president of Ukraine protesting the passage of the de-communization laws. Bob speaks to Amar about the effect Viatrovych’s whitewashing is having on Ukraine and why some in the West seem to be going along with it.

BROOKE GLADSTONE:  This is On the Media. I’m Brooke Gladstone.

BOB GARFIELD: And I’m Bob Garfield. History, for the propagandist, is a powerful resource, full of glorious deeds and national tradition. But it’s also littered with shameful episodes and inconvenient truths. These, the propagandist, is obliged to spin, or erase. The Soviet Union excelled at such revisionism and the legacy continues. Consider the former Soviet republic, Ukraine, where some of its ugliest chapters are being redacted by an archivist named Volodymyr Viatrovych. And he’s doing it, in an ironic turn, to advancer Ukraine’s narrative as a righteous foe of post-Soviet Russia.

Tarik Cyril Amar teaches Soviet, Russian and Ukrainian History at Columbia University. He is one of 70 scholars who signed an open letter protesting attempts by Viatrovych, head of Ukraine’s Institute of National Memory, to whitewash the history of certain nationalist groups during and after World War II.

TARIK CYRIL AMAR:  These nationalists were ethnic cleansers. They also committed mass murder and, to a certain extent, they continued participating in killing Jews, that is, in the Holocaust, even beyond the pogroms of ’41. And this is not a question of he said, she said, opinion, as Viatrovych likes to depict it. It’s a question of historical fact, as in so many other European societies, at that point.

BOB GARFIELD:  Unlike Germany, there has been no process of truth and reconciliation in Ukraine to deal with its fraught history. But now, it is erasing history. Tell me, please, about Viatrovych and his Institute of National Memory.

TARIK CYRIL AMAR:  Viatrovych has created the legal basis for transferring control over the most politically sensitive archives, the archives of the former KGB from the Security Service to his Institute of National Memory. To have the archives under the control of this particular person is worrying. Viatrovych uses uncritically document collections that have clearly been manipulated, submitted to retyping, editing of various sorts. If it’s good for nationalism, he’s all right with it. If it’s bad for nationalism, he seeks really any means he can find, including very dubious ones, to dismiss it. He  dismisses, essentially, any testimony by survivors.

We must take survival testimony extremely seriously because, for very simple reasons, perpetrators don’t have much incentive to tell us the truth, right, and survivors in large genocides are a small minority. They basically show us the tip of an iceberg.

BOB GARFIELD:  Viatrovych, when confronted with the ugliest part of Ukrainian history, likes to say, it was complicated.

BOB GARFIELD:  But you find irony in that explanation.

TARIK CYRIL AMAR:  Yeah, bitter irony, to be honest. Viatrovych, actually, is not ready to face the complexity. There is a bit of a switcheroo, really, in this discourse. It’s always very complex when it comes to the hard issues but when it comes to public policy, which he shapes, then we are in a position that we can clearly say who should be a hero and, at that, a very pure type of hero, and who should not be.

BOB GARFIELD:  So it’s not just revisionism and denialism. He has now managed to criminalize historical publications or even inquiries that would cast Ukraine in a bad light.

TARIK CYRIL AMAR:  It’s usually described as the “de-Communization laws” and that is a bit of a euphemism. Yes, there are laws in there that see to it that, for instance, place names, street names that still are Soviet are replaced, that  Soviet monuments, at least many of them, are removed, and so on and son on. But the much more problematic part of these laws is actually not about de-Communization, namely making it a criminal offense to show disrespect for what the law calls “the fighters for Ukrainian statehood and independence,” and those include the World War II nationalists.

Now, when the laws were passed by the parliament, there were protests, repeated protests appealing to the President Poroshenko please not to sign them into law. And, very unfortunately, he has signed them into law.

BOB GARFIELD:  Viaytrovych and his Institute have put the West in a kind of funny position because it’s in the interest of the West, who wish to see Ukraine turn continually West, to impeach Putin’s narrative of lingering fascism.

BOB GARFIELD:  There have been some profiles of Viatrovych in the American press which have been sympathetic, even fawning. What do you make of that?

TARIK CYRIL AMAR:  Well, I really do not like to use a, a relatively strong term, but I think they are, technically speaking, naïve because he does have the media savvy to present himself in the language Western interlocutors like to hear. And that, of course, is the language of democracy, national inclusivity, overcoming divisions, this in Ukrainian society. But unfortunately, his actions, including legislation that he shapes, do not correspond to that at all.

TARIK CYRIL AMAR:  The West seems to be repeating its mistakes of the Cold War and putting up with all sorts of nonsense, including a gathering authoritarianism for the sake of the momentary political struggle. How do you see this playing out?

TARIK CYRIL AMAR:  You know, I really can’t tell about gathering authoritarianism. Ukraine is actually too pluralist to, in fact, allow Viatrovych to be entirely successful. However, it is a bit problematic when Western institutions or media treat him as an ordinary scholar, which he is not, because whenever that happens it’s used to bolster his case and his authority inside the Ukrainian public sphere.

Let me be clear about something. I mean, this is my personal opinion. I have the greatest sympathy for Ukrainians who want to turn towards the European Union, but we don’t do Ukraine any favor if we allow Viatrovych to dominate and monopolize the discussion. There are Ukrainian intellectuals and historians who could give us an alternative to the Putinist brutal propaganda narratives that wouldn’t put bias against bias but that really overcomes the problem of propaganda, as such, in showing that Ukrainian society can actually have a frank public discussion and doesn’t need another myth to counter an old myth.

These resources, these people – let me repeat – exist in Ukraine. And I would wish that, that we would support them and that we would not support Viatrovych and also what he stands for.

BOB GARFIELD:  Tarik, thank you so much.

TARIK CYRIL AMAR:  Thank you very much, thank you.

Read also:
The era of revisionism of Ukraine’s history (I), published in German Foreign Policy.com, May 10, 2016

The historian whitewashing Ukraine’s past, by Josh Cohen, Foreign Policy Magazine, May 2, 2016