Boris Litvinov was interviewed by Halyna Mokrushyna for New Cold War.org on November 30, 2014 about the political situation in Donetsk, the region’s relations with Ukraine and Russia, and the future of the Donetsk People’s Republic (DPR). Boris Litvinov is the former head of the Supreme Council of the DPR and is a deputy of the People’s Council of the DPR. He is the leader of the Communist Party of the Donetsk People’s Republic, founded in October 2014.

Is the project of the Donetsk People’s Republic supported by the population?

When we organized our referendum in May [referendum for the independence of the Donetsk People’s Republic], we thought that common sense would prevail. We have 3.2 million voters in Ukraine Donetsk and 2,700,000 thousand voted, of which 2,511,000 voted for the creation of Donetsk republic. We believed in people’s right to self-determination. 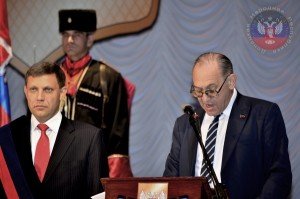 We are united in our aspirations. That’s why we wanted a negotiated, ‘civilized’ separation with Ukraine. And indeed, at the beginning, it was going this way.

We knew that negotiations with Kyiv would be long and difficult, but we wanted a separation. We would cooperate with Kyiv, since we have a common economy and a common transportation system. We would share it and pay for it. But Kyiv decided otherwise. They started bombing us already during the day of referendum. And it got worse. Now we have a full-blown civil war.

Do you see your future with Ukraine?

I support united Ukraine with both hands. I was born here, I live here, and I am an ethnic Russian. We are different mentally and spiritually [from Western Ukraine – HM]. Several hundred years under Polish-Lithuanian rule created a certain Polish-Lithuanian spirit.

We in Eastern Ukraine are very young. Our Ukraine has only 150 years – before that was Dikoe pole (the wild plains). Our land is international. With the beginning of industrialization, people of all nationalities came here. It did not matter what nationality you were. What mattered was your readiness to build, to create. It came out particularly strong during the Soviet period. Added to this was the ideology of internationalism. That is why we are internationalists.

We do not want Kyiv’s idea of building a mono-ethnic state, and particularly the methods which they have been using since Yushchenko came to power. [1] We are internationalists. We do not want a state for one nation. This is a contradiction, and I do not see how we can resolve it.

Another contradiction that we have with Kyiv is their drive to join the European Union, which is not in a hurry to accept Ukraine. It is a rupture of links with Russia. We do not like this, and we do not think that Kyiv will turn towards the Eurasian Union [2] any time soon.

A third contradiction is the image of Russia as the enemy, which has been formed and imposed during 23 years of Ukrainian independence. It has been formed through education, ideology, arts. If a state creates an enemy, it has to protect itself against this enemy, or to fight it. Because Ukraine is too weak, it appeals to NATO and other Western allies. We know quite well that NATO cannot be allowed here, because this would be a direct threat to us and to our brothers and sisters in Russia.

All these contradictions are very hard to resolve in the near future. Only time will resolve them and show who was right and who was wrong. With time we will reconcile. But still we continue killing each other…

We do not have the motivation to kill, we are defending ourselves. Those who come to our land do not have the motivation to kill, either. Who comes here? Workers and peasants. They come to kill their own people because they have a different opinion. We did not come to their land, they came to ours. Most of them have been forced. Of course, there are ideologically driven individuals among them. But most of them are soldiers, officers who fulfill their duty. They are forced to fight this civil war.

How did the ‘Anti-Maidan movement begin in Donetsk?

I was on Maidan Square three times – in November, when it all started, in December, and in early February. I saw how it all unfolded. In the second half of February, the wave reached us in Donetsk and Donetsk region. We stood up because we did not want Maidan ideology to invade our land.

The first confrontation happened on February 21, when Pravyi Sektor [3] planned to come to Donetsk to take by assault the regional administration building and to destroy monuments to Lenin and other symbols of Soviet epoch. We stood in front of the Lenin monument – communists, members of the Party of Regions, monarchists, other rightist and leftist movements – protecting it as a symbol of our land. We stood up and remained there till the end of May. Tents have been taken down, as nothing threatens our symbols anymore.

The most active people and groups in the Donetsk Anti-Maidan movement were the local Communist Party, the Donetsk Republic of Andrei Purgin, a lot of women and veteran organizations–for instance, a ‘Union of Soviet officers’—and, in general, people of anti-fascist views. They were not organized in any kind of political party. They had it in their genes, in their education, in their memory. There was the progressive socialist party of Natalia Vitrenko.

Pavel Gubariev, with all due respect, was an incidental participant. His party was a short-lived formation which ceased to exist by the end of March when he was arrested by the SBU.

It was people who took over the regional administration building. I cannot single out a specific political force. It was a 15th or 16th regional meeting. It was on April 6 [2014]. For the nth time, we demanded authorities to listen to us and to initiate a referendum on federalization. [4] And as always, nobody listened. At that meeting, a decision was made: enough demanding! Let us get inside the building, sit in the session hall and wait till the deputies come and take a decision in front of us.

And we did it. It was a warm Sunday. We got inside easily because the building was cordoned off by 18-20 years old soldiers of the Ministry of the Interior. They stepped aside and let us through.

We planned to wait till Monday noon. But then during the night, a realization came that deputies might not come and nothing will happen. We decided that we should prepare a document stating that the people will take power into their own hands if the deputies refuse to execute the will of the people. I was sent home to write the Declaration of Independence of the Donetsk People’s Republic.

I wrote it. And on Monday afternoon, when out of 179 deputies only three came, a Declaration of the Independence of DPR was read in the session hall of the Donetsk regional council.

We want to build a parliamentarian republic, based on the state’s ownership of land and its resources, of air and water spaces, a state’s strong control of economic process, and a socially oriented state.

How do you see the future of your relations with Ukraine and Russia?

I try to convince my colleagues that after very long negotiations with Ukraine, we should arrive at the implementation of the principle of peaceful coexistence. This principle was elaborated by Soviet experts in the Ministry of Foreign Affairs. Different states, if they do not want to cooperate, can coexist. To coexist means to refuse to resort to military confrontation and adopt a status quo. Historically, the situation is what it is and we cannot change it. We will not embrace each other as friends, but we will not kill each other, either. Let history and experience judge who is right and who is wrong. That is how I see our relations with Ukraine.

As for Russia, we want to become a member of the Eurasian Union and we will do everything to make that happen. But we have a long way to go. We are now working on getting some sort of recognition. To date, even though one might smile at it, we have been recognized by only one state – South Ossetia. We are now conducting negotiations with Abkhazia regarding the recognition and establishment of diplomatic relations with this state. There is also Transnistria, and Karabach. We are working on creating an interparliamentary assembly of states which are striving to get their sovereignty recognized.

Boris Litvinov was born in the city of Dzerzhinsk, Donetsk Oblast, in 1954. He holds degrees in music, mining and management. He used to work as a teacher and business executive. He was a member of the Donetsk city council and headed the Communist Party faction of Donetsk’s Kirovsky district prior to getting involved in the building of the Donetsk Peoples Republic. You can read an interview he gave to the Russian journal Rossiya Segodnya on Sept 1, 2014 here.

Notes:
[1] Viktor Yushchenko was president of Ukraine from 2005 to 2010.
[2] The Eurasian Economic Union is an economic trade zone of five countries with a total population of 170 million people–Russia, Belarus, Kazakhstan, Armenia, and Kyrgyzstan. It came into formal existence on Jan. 1, 2015.
[3] Pravyi Sektor is a far-right nationalist political party and paramilitary movement, formed in November 2013 during anti-government protests on Maidan. It played a key role in the overthrow of Yanukovych government. Members of Pravyi Sektor have been actively involved in the anti-terrorist operation against Donbas. They have been engaging in illegal activities of intimidating, kidnapping and beating anti-nationalist Ukrainians and Anti-Maidan activists.
[4] The early demand of the Anti-Maidan movement was for ‘federalization’, that is, a decentralization of political powers in Ukraine, including the right to elect governors of the oblasts (provinces), rather than having them appointed by Kyiv.