Inside the Obama Administration’s about-face on arming Ukraine

Since last year’s start of the crisis in Ukraine, the White House repeatedly has turned down requests from Kiev for weapons. Over the last four days, American policy has shifted so dramatically that Ukrainian President Petro Poroshenko said late Tuesday he is certain guns are coming. 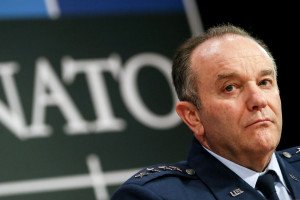 Part of the reason for the turnabout is the deteriorating security situation in eastern Ukraine, where the United Nations estimates more than 5,000 have been killed in fighting between government forces and pro-Russian rebels. But it’s also a reflection on how a series of unconnected events can change the political calculus of the Obama administration while altering the conventional wisdom in Washington.

Additionally, according to one expert, the policy shift represents a realignment of political loyalties among Beltway insiders as President Barack Obama’s second term wanes.

The week began with a New York Times report indicating NATO’s military commander, Gen. Philip M. Breedlove, wants to send weapons to Ukraine. The Times also reported Obama was taking a new look at his stance, an obvious trial balloon to see how lawmakers, the public, and the foreign-policy community would react.

They also suggested the president send $1 billion in military assistance this year. The study urged European nations to send “equipment and weapons from NATO members who operate former Soviet equipment compatible with the arms currently in the Ukrainian inventory,” a subtle reminder of the decades-old military technology Ukraine is using.

Then on Wednesday, Obama’s defense secretary nominee, Ashton Carter, told Senate lawmakers that he was “inclined” to provide lethal assistance to Kiev. It’s virtually impossible that Carter would have made such a bold break with standing administration policy without a signoff from the White House, suggesting a shift to lethal assistance is underway.

“I don’t have any doubt that the decision on the possibility of weapon supplies to Ukraine will be made by the United States and our other partners,” Poroshenko said at a news conference in Kharkiv late Tuesday.

In an interview with Foreign Policy, Herbst said that the timing of the New York Times report followed by the release of the study was a happy accident. “I would love to tell you that we knew this would be a key week. But that would be a lie,” he said.

Herbst said the report was the product of a whirlwind seven-week push initiated by Lodal, who asked the experts in December to travel to Brussels and Ukraine to consider American options to counter Russia. He said they had returned three weeks ago and quickly compiled the report.

“We did it quickly because we all believe it’s urgent,” the former ambassador to Ukraine said. “We want to bring strategic clarity to western capitals.”

Stephen Szabo, executive director of the Transatlantic Academy, told Foreign Policy Wednesday that he suspects more than urgency is behind the report.

“I look at this as a cynical Washington way. This is [Hillary] Clinton’s team trying to distance themselves from Obama’s foreign policy,” he said. “These people are going to play roles in the Clinton administration” if she wins the 2016 presidential race, he added.

Szabo added the Obama administration might be revisiting their stance on weapons because economic sanctions aren’t working and “he feels he has to do something.” However, Szabo said a change in policy plays into Russian President Vladimir Putin’s hands.

“Putin not going to back down. He’s going to continue to show he has control of the situation and has more strategic interest in the region. I think he’s going to push further for a land bridge to Crimea,” Szabo said.

Federiga Bindi, a senior fellow at the Center for Transatlantic Relations, added the move could splinter NATO because many Europeans oppose directly arming Ukraine over fears it would escalate the standoff with Russia.

“Any time we have [supplied weapons], it has resulted in disaster. Either the weapons turned against like in Iraq or leads to direct intervention like in Libya,” she told Foreign Policy Wednesday.

Herbst said those who oppose Western weapons in Ukraine are not taking Putin seriously.

“Part of the report is designed to help Washington and the West wake up. What’s happening in Ukraine is a case of a Kremlin covert and increasingly overt war. Putin has stated in numerous pronouncement his revisionist intent,” he said, referring to Putin’s references to Russian expansion. “If he succeeds in Ukraine, he will move on to other places, including Estonia and Lithuania and Kazakhstan.”