The International Criminal Court has made an initial ruling that it will not investigate as crimes against humanity the massacres of protesters and police that occurred in Maidan Square in Kyiv in February 2014. It says information is too limited to sustain a claim that the killings were widespread and systematic or that they constituted crimes against humanity. 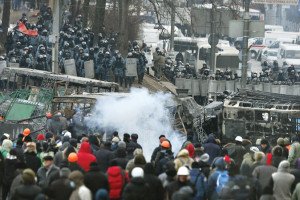 The AFP news story reporting on the decision (below), published on November 12, repeats the version of events attributing the massacres to the special police (Berkut) forces of the government of President Victor Yanukovych, who was overthrown on Feb 21-22, 2014.

Independent investigations of the Maidan massacres are now less likely. The official investigation by judicial authorities in Ukraine is being falsified in order to promote the politically convenient version of events attributing the massacres to the Berkut.

Ukraine’s investigation of the massacres has come under sharp international criticism, including earlier this month by a special investigation panel of the Council of Europe. Several officers of the former Berkut force are presently on trial in Kyiv.

Ottawa researcher Ivan Katchanovski explains on his Facebook page, “Results of ballistic expertise by the Ukrainian investigation that for the first time were made public during the Berkut trial on November 12 [2015] have confirmed my study findings that the protesters were massacred from the Maidan-controlled locations, in particular, the Hotel Ukraina.”

In February 2015, Katchanovski published an extensive study of the Maidan sniper massacres. The study has been updated twice since that time. The latest version, dated September 2015, is here.

A preliminary probe suggests Ukraine’s security forces used “excessive and indiscriminate” force in the 2014 Maidan protests but are not guilty of crimes against humanity, the International Criminal Court’s chief prosecutor said Thursday.

Fatou Bensouda has opened a tentative investigation into Ukraine’s conflict, sparked by a November 2013 uprising at Kiev’s Maidan Square that eventually toppled the pro-Russian government of former president Viktor Yanukovych.

“While these considerations tend to indicate that alleged crimes do not amount to crimes against humanity, the Office notes that serious human rights abuses did occur” at Maidan, the Hague-based Bensouda said in a newly-released report.

“Ukrainian security forces frequently used excessive and indiscriminate force against protesters and other individuals, such as journalists covering the event,” she said.

The demonstrations that turned the square into a battleground began after November 21, 2013 when Yanukovych sank a political deal with the European Union, turning instead to the Kremlin for support.

Pro-western demonstrations gathered pace throughout the winter, reaching a climax around mid-February last year with a failed crackdown by authorities leading to the death of more than 100 protesters.

Bensouda said although the attacks on the protesters constituted an “attack directed against a civilian population” there was “limited information… to support a conclusion that… it was either widespread or systematic.”

Crimes against humanity — one of the world’s most serious and investigated by the Hague-based ICC — had to conform to this criteria, Bensouda said in the 65-page report.

She said the ICC’s preliminary probe elsewhere in the country also continued, including in the Crimea and the war-ravaged east, where Ukranian armed forces had been battling pro-Moscow separatists.

Bensouda added she was “closely following the progress and findings” of investigations into the downing of Malaysia Airlines flight MH17 over eastern Ukraine last year.

Some 298 passengers and crew died when the jetliner was shot down with a BUK surface-to-air missile in mid-July 2014 while on a routine flight between Amsterdam and Kuala Lumpur.

Maidan self-defence activists clash with fighters of the Kiev-1 volunteer battalion on Independence Square in Kiev on August 7, 2014

Ukraine is not a state party to the ICC’s founding Rome Statute, but its parliament has accepted the court’s jurisdiction to probe crimes committed on its territory from November 2013 onwards.

Note by New Cold War.org:
Earlier in 2015, Ukraine derogated from its human rights obligations in the east of the country under the European Convention on Human Rights and the International Covenant on Civil and Political Rights. Other cases of countries that have derogated include Britain during its war in Northern Ireland and Turkey during its long war against the Kurdish people. In all these cases, the Geneva conventions prohibiting torture, war crimes and other rights violations still apply.