India’s illegal power grab is turning Kashmir into a colony 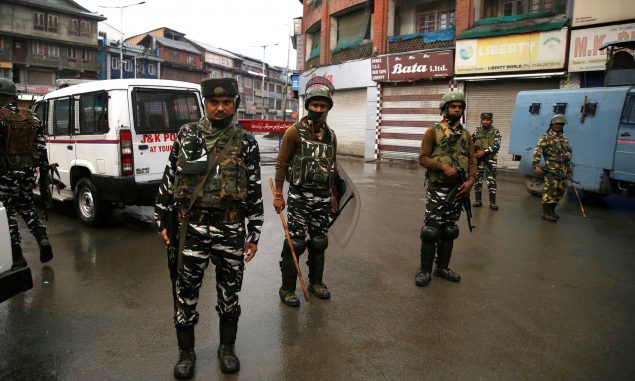 ‘India has effectively instituted a mass detention of Kashmiris by rushing in thousands of troops in addition to the half a million already stationed there.’ Indian soldiers in Srinagar, Kashmir. Photograph: Farooq Khan/EPA

Background reading: Tryst with fate: India and Pakistan in the war on terrorism

I haven’t been able to hear the voices of my parents for more than a week now. We usually talk or exchange messages a few times during the day, mostly about their creeping health issues or about my children’s latest antics here in London. But now, not a peep. It’s because, like all Kashmiris, they’re under siege, experiencing the worst crackdown in three decades, imposed by the Indian government as it revoked the region’s autonomy by abrogating article 370 of the constitution.

The article, dating back to 1949, guaranteed Kashmir’s special status within the larger Indian union and enshrined the conditions of the state’s accession to India soon after partition in 1947. The newly created states of India and Pakistan had gone to war over Muslim-majority Kashmir, an independent kingdom at the time. After mediation from the United Nations, all parties agreed that the future of Kashmir was to be decided later via a referendum – something India and Pakistan have failed to honour. The provisions of the article meant that, pending the final resolution via a plebiscite, the state had its own constitution, its own national flag, a prime minister and a president, even as successive Indian regimes, starting in the early 1950s, diluted the article in order to diminish Kashmir’s autonomy.

India has also abrogated article 35A, introduced in 1954. It empowers the state legislature in Srinagar, the capital, to define who is a permanent resident with the right to buy property and apply for jobs. It’s the dissolution of this article that perhaps presents a graver threat to Kashmiris, as it potentially clears a way for Indians to acquire land.

By erasing what was left of its independence the government of India, led by Narendra Modi, has chosen to unilaterally alter the future of an entire people (who have never submitted to Indian sovereignty). Not only that, it has effectively instituted a mass detention of Kashmiris by rushing in thousands of troops in addition to the half a million already stationed there.

All of this happened without any consultation with Kashmiris, without any discussion among India’s own parliamentarians, and, most crucially, without any sound legal foundation. Article 370 can only be amended with the approval of the Constituent Assembly of Jammu and Kashmir, which was dissolved in 1956. In its absence, it falls to the legislative assembly of Kashmir to debate and approve any changes to the article, but India suspended that in November last year, putting the state under its direct rule. In place of an elected government, Delhi sent a governor to rule Kashmir.

Legal and Kashmir experts agree that a man who’s neither elected nor a representative of the Kashmiri people cannot be a surrogate for an elected body. The necessary legal approval for the revocation, according to India’s own constitutional guarantees, was never sought, therefore rendering the whole exercise a farce, a travesty of democratic norms.

As part of this shock-and-awe move, political and civil leaders in Kashmir, including unionists who’ve been arguing India’s case, have been arrested. The entire population is under the severest curfew in decades and an unprecedented communications blockade has been put in place, with mobile phones, broadband, even landlines blocked. The world’s largest democracy has cut off Kashmir from the rest of the world.

The decision, however, has wide support across India. Most political parties, most of the Indian media, film stars, some writers – everyone seems to say in unison: take away the rights of these ungrateful Muslims. Imagine a small landlocked region with a few million people incarcerated in their own homes, up against a mighty power, its army, its people, its media, and you get a sense of the crushing injustice of the situation.

India’s treatment of Kashmiris is the clearest glimpse yet of the path that Modi, a Hindu nationalist leader, wants to tread. His vision is for a majoritarian, Hindu-first nation where all debate, difference and dissent will be crushed. The rebellious others on the margins, especially if Muslim, are to be subjugated and subjected to a medieval siege to force them to bend to the will of the mega-state. For some, this comes complete with references to spoils of war. Two lawmakers from the ruling party, including a chief minister, have made jokes about “bringing in girls” from Kashmir.

Kashmiris will inevitably see this new attack on their body politic as part of a long list of betrayals, and it reinforces the idea that India’s behaviour towards Kashmir has always been like that of a coloniser. The erasure of autonomy, however tenuous, however token, is the starkest display of that relationship – and it’s important to remember that Kashmir is subject to the densest militarisation on the planet. A video filmed by the BBC shows thousands protesting after Friday prayers in Srinagar. Another video, recorded by Indian journalist Siddharth Varadarajan, shows boys in hospital beds who’ve already been hit in the eyes with lead pellets.

As statist Indian journalists (some of whom have been given access to Kashmir while most local journalists remain incommunicado) work overtime to project a narrative of normality, it has fallen to the international media, and a few brave Indian outlets, to report the truth. The BBC, the New York Times, Reuters, Al Jazeera, the Guardian, the Wire India, Scroll India, Telegraph India and a few others have shown protest marches, wounded civilians, and a grieving people seething with anger, despite the unprecedented siege.

Addressing the people of Kashmir in 1952, India’s first prime minister, Jawaharlal Nehru, said: “Kashmir is not the property of India or Pakistan. It belongs to the Kashmiri people … We have taken the issue to the United Nations and give our word of honour for a peaceful solution. As a great nation, we cannot go back on it. We have left the question of final solution to the people of Kashmir and we are determined to abide by their decision.”

India has now done exactly what Nehru ruled out, going back on its word, and scripted a final betrayal of the Kashmiri people. The journey from being a colony of the British empire to colonising the unyielding Muslim other next door reveals a catastrophic mutation at the heart of the Indian state.

I asked a Kashmiri journalist who had returned to Delhi after spending two days in the state if he knew where it was all headed. He responded with one word, Falasteen, the Urdu for Palestine – a clear reference to the settler-colonialist occupation there.

I pray that when I go home next, I do not visit my parents in a colony of the Hindu nationalist empire.