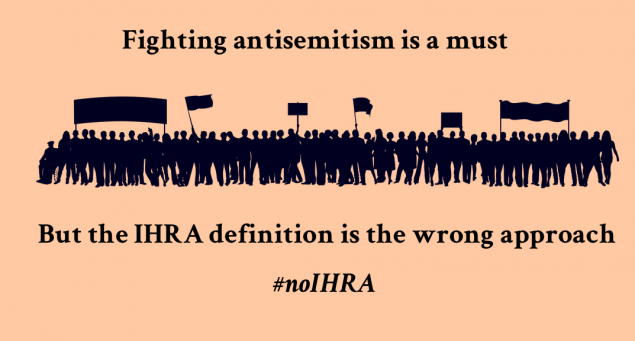 A major international effort is underway by Israel and lobby groups to brand criticism of Israel and Palestine solidarity activism as “the new antisemitism”. They are seeking to do this by advocating for the passage of the International Holocaust Remembrance Alliance’s (IHRA) Working Definition of Antisemitism by all levels of government, as well as by institutions like universities and police departments. The IHRA definition of antisemitism is a flawed document which equates anti-zionism and antisemitism and, if implemented, poses a real threat to academic freedom, freedom of expression and the right to protest.

To be clear, antisemitism is a real problem and must be fought in all its forms.

We, the undersigned members of the Canadian academic community wish to express our opposition to the adoption of the International Holocaust Remembrance Alliance (IHRA) Working Definition of Antisemitism by academic institutions and other public bodies in Canada.

Antisemitism is an imminent and increasingly deadly threat to Jews. However, we do not believe that the adoption of this definition serves the purpose of defeating this insidious form of hatred. The IHRA definition, which has recently been adopted by the Canadian government, is worded in such a way as to intentionally equate legitimate criticisms of Israel and advocacy for Palestinian rights with antisemitism. This conflation undermines both the Palestinian struggle for freedom, justice and equality and the global struggle against antisemitism. It also serves to shield Israel from accountability to universal standards of human rights and international law. We believe that the adoption of the IHRA definition of antisemitism by Canadian academic institutions would create a “chilly climate” in relation to forms of teaching, research and activism on Israel and Palestine. We urge all those who value honest debate and academic freedom to reject the imposition of a definition that would imperil the pursuit of truth and the legitimate expression of dissent.

*****
For more information, including Independent Jewish Voices’ full report on the IHRA definition, please visit: www.noihra.ca. Please feel free to contact us with any questions at [email protected].