U.S. is pushing for an Iraq-Saudi alliance to counter Iran

DOHA, Qatar — U.S. Secretary of State Rex Tillerson took the Trump administration’s case for isolating and containing Iran in the Middle East and beyond to two Gulf Arab nations on Sunday, pushing for Saudi Arabia and Iraq to unite to counter growing Iranian assertiveness. He also called for a quick resolution to the ongoing crisis between Qatar and its Arab neighbors, which he said was unintentionally bolstering Iran. 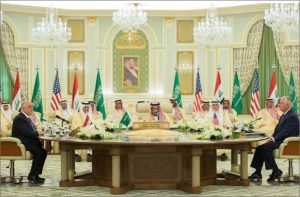 In Saudi Arabia and later Qatar, Tillerson denounced Iran’s “malign behavior” and urged nations of the region and elsewhere, notably Europe, to join the administration to halt any business they do with Iran’s powerful Revolutionary Guard. He also demanded that Iranian and Iran-backed Shiite militia in Iraq either return to their homes, integrate into the Iraqi army or leave the country.

In Riyadh for the inaugural meeting of the Saudi Arabia-Iraq Coordination Council — a vehicle that U.S. officials believe can wean Iraq from Iran — Tillerson told Saudi King Salman and Iraqi Prime Minister Haider al-Abadi that the nascent partnership between their countries held great promise for Iraq’s reconstruction after devastating battles to wrest territory from the Islamic State group and its independence from foreign influence.

Secretary of State Rex Tillerson took the Trump administration’s case for isolating and containing Iran in the Middle East and beyond to two Gulf Arab nations, pushing for Saudi Arabia and Iraq to unite to counter growing Iranian assertiveness. (Oct. 22)

“We believe this will in some ways counter some of the unproductive influences of Iran inside of Iraq,” he said at a news conference with Saudi Foreign Minister Adel al-Jubeir after the council meeting.

Tillerson said countries outside of the region could also play a role, primarily by shunning the Revolutionary Guard, which play a major role in Iran’s economy and were added to a U.S. terrorism blacklist earlier this month. Companies and countries that do business with the guards “really do so at great risk,” he said.

“We are hoping that European companies, countries and others around the world will join the U.S. as we put in place a sanctions structure to prohibit certain activities of the Iranian Revolutionary Guard that foment instability in the region and create destruction in the region,” Tillerson said.

At the council meeting, Tillerson praised the Saudi king and Abadi for the August reopening of a major border crossing and the resumption of direct flights between Riyadh and Baghdad last week.

“Both represent the beginning of what we hope will be a series of even more tangible actions to improve relations and strengthen cooperation on a host of issues,” he said. “Your growing relationship between the kingdom and Iraq is vital to bolstering our collective security and prosperity and we take great interest in it.”

His participation in the meeting comes as U.S. officials step up encouragement of a new axis that unites Saudi Arabia and Iraq as a bulwark against Iran’s growing influence from the Persian Gulf to the Mediterranean Sea. Amid the push for that alliance, the Iraqi government is struggling to rebuild recently liberated Islamic State strongholds and confronts a newly assertive Kurdish independence movement.

History, religion and lots of politics stand in Tillerson’s way, but both the Saudi king and the Iraqi prime minister appeared optimistic about the prospects.

“We are facing in our region serious challenges in the form of extremism, terrorism as well as attempts to destabilize our countries,” Salman said. “These attempts require our full attention. … We reaffirm our support for the unity and stability of our brother country of Iraq.”

Abadi expressed pleasure with “the thriving relations between our two brotherly countries.”

“We are open and we want to move away from the past,” he said. “The region cannot tolerate any further divisions. Interference in the internal affairs of other state should stop.”

Shiite-majority Iraq and Sunni-led Saudi Arabia, estranged for decades after Saddam Hussein’s 1990 invasion of Kuwait, have tried in recent years to bridge their differences. Saudi Arabia reopened its embassy in Baghdad in 2015 after a quarter century. The first visit by a Saudi foreign minister to Baghdad came in February this year, followed by the border crossing reopening in August and resumption of direct flights between the capitals suspended during the Gulf War.

Over the weekend, the Saudi oil minister, Khalid al-Falih, made a high-profile appearance at Baghdad’s International Fair, and held talks with his Iraqi counterpart, Jabar al-Luabi.

Nevertheless, the relationship is plagued by suspicion. Iran’s reported intervention in Iraq’s semiautonomous northern Kurdish region, after last month’s much criticized vote for independence in a referendum, has deepened the unease.;After his talks in Riyadh, Tillerson flew to the Qatari capital of Doha, a direct route that has been closed to commercial airlines since June when the now-five-month old crisis between Qatar and Saudi Arabia, Bahrain, Egypt and the United Arab Emirates erupted, ostensibly over terrorism financing. Qatar and Bahrain are home to major U.S. military bases in the Middle East, the al-Udeid Air Base near Doha and the headquarters of the U.S. 5th Fleet in Manama.

Tillerson has attempted to facilitate a dialogue through talks with the feuding parties as well as supporting a Kuwaiti mediation effort but has thus far been unsuccessful. He renewed those calls but allowed that progress seemed unlikely. “We cannot force talks between parties who are not ready to talk,” he said.

“The United States remains concerned that the dispute has had negative consequences economically and militarily; the U.S. has felt these effects as well,” he said. “None of us can afford to let this dispute linger. We ask that everyone ease the rhetoric and deescalate the tensions.”

Tillerson noted that the only country benefiting from the crisis is Iran, which is now Qatar’s lifeline as its neighbors have sealed their land, sea and air borders. He said Qatar’s new reliance on Iranian airspace is “the most immediate and obvious gain that Iran has.”

“Anytime there is conflict and destabilization among countries that are typically allies, someone will always come in to exploit those differences,” he added.

The Kurdistan independence referendum backfired and Kurds are suffering, but Turkey might want to hold off on celebrating until it considers the long-term consequences.

The defeat of Isis in Raqqa will bring problems for the victorious Syrian Kurds, by Patrick Cockburn, The Independent, Oct 16, 2017

The Kurds in Syria have always wondered what is going to happen to them once the US no longer needs them as an essential ally against Isis, we may now found out

[As with other Western journalists, Patrick Cockburn provides no news or analysis of the ongoing constitutional discussions in Syria in favour of a federal system that would grant formal political representation o Syria’s Kurdish and other national minorities. Russia has urged Syria to ammend its constituton accordingly.]

History tells us that nationalist referendums, like those in Kurdistan and the UK, never end well, by Patrick Cockburn, The Independent, Oct 16, 2017