Enclosed are two news articles reporting on the two-day visit to Ukraine of U.S. Vice President Joseph Biden on December 7, 8, 2015. To no one’s surprise, Biden affirmed continued U.S. support to the pro-Western governing regime in Ukraine. 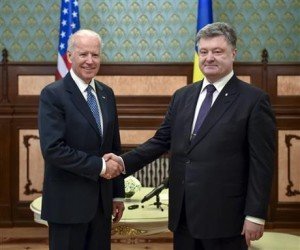 The language used by Biden and Ukrainian President Petro Poroshenko in wrapping up the visit illustrates the shift of messaging by the NATO military alliance and its subordinates in Kyiv which began in August 2015. At that time, Kyiv’s civil war in eastern Ukraine and the state of the country as a whole was one of utter exhaustion. Simultaneously, the large, European powers wanted a cooling of the fighting because bigger concerns were looming for them in the Middle East. A cooling of Kyiv’s military aggression in the east of the country was formalized by a ceasefire renewal on September 1.

But this left the thorny issue of the Minsk-2 ceasefire agreement on the table. Specifically, there are 13 clauses of the Feb 12, 2015 agreement which the Ukrainian and Western signators were failing to implement. And let’s remember that Minsk-2 was endorsed by no less than the UN Security Council on February 17, five days after its signing in Minsk, the capital of Belarus.

Kyiv ignored the agreement following the signing. Yes, its daily shellings of civilians cooled for a few weeks, but then they returned. That was violation number one of the agreement. Meanwhile, nothing was being done to implement the other 12 clauses. What to do about Minsk-2 in August, then, when Kyiv had neither the capacity nor the continued support from the European Union to fully prosecute its civil war? Might this mean that Western media and governments would be obliged to report on the progress, or not, with Minsk-2, something they had been neglecting to do? What about, for example, the presence of U.S., British and Canadian military forces in Ukraine? Clause ten of Minsk-2 reads: “Withdrawal of all foreign armed formations, military equipment, as well as mercenaries from the territory of Ukraine under monitoring of the OSCE. Disarmament of all illegal groups.”

The answer for the violators of Minsk-2 has been to wrap themselves in its mantle. They continue to violate the terms of the agreement by failing to implement its 13 clauses, but the way out of that public relations dilemma is to turn the tables and say that Russia is guilty of violating the agreement. After all, Western media is doing such a miserable job of reporting on Minsk-2 and on the situation in eastern Ukraine and in the rest of the country, who would know otherwise?

Russia is accused by Biden of “annexing” Crimea and being an “aggressor” in eastern Ukraine. Even if this were true, Minsk-2 sets out a political process to resolve such concerns. Or at least, that’s what the UN Security Council decided on February 17 of this year when it endorsed Minsk-2. The 13-clause agreement includes the following measures:

And so on. Background to the Minsk-2 ceasefire agreement, including the full text, is here.

Biden: ‘More time talking to Ukraine president than my wife’

Joe Biden has been clocking in a lot of phone hours lately, but they aren’t to his wife. Instead, the U.S. vice-president said during a two-day visit to Ukraine that his main squeeze has taken a backseat to Ukrainian President Petro Poroshenko. 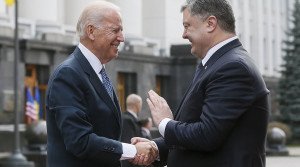 “It is true I’ve only been here four times in two years. But I think we may have logged close to 1,000 hours on the telephone. I think I tend to be more in direct conversation for longer periods of time with the president than with my wife. I think they both regret that. But it is important,” Biden said at a joint briefing in Kiev on Monday.

Biden did, admittedly, have more to share than his time spent chatting to his buddy Poroshenko. He also said that “Ukraine is on the cusp.”

“What happens in the next year is likely to determine the fate of this country for generations. You have a free, prosperous and democratic society because your people are so brave, they have put so much into this, they deserve no less, and I know this is your obligation and objective as well, and we want to help in any way we can,” he said.

Biden went on to once again slam what he called Russia’s “illegal annexation” of Crimea and “aggression from Russia and Russian-backed separatists.”

The vice-president announced $190 million in new aid for Ukraine, contingent on Kiev continuing to make progress on rooting out corruption. The newest aid is aimed at helping law enforcement, reforming the justice sector and streamlining regulations and privatization of state-owned enterprises, Biden said. The new funds bring U.S. assistance to nearly $760 million since the formation of the new government in Kyiv in February 2014.

Biden’s two-day visit to Ukraine is aimed at reassuring Kiev that Washington won’t skimp on its commitment to Ukraine at a time when attention has shifted to Syria and fighting Islamic State [Daesh].

Speaking on Monday during an official visit to the Ukrainian capital, Biden also emphasized the need for Russia to fully meet its obligations under February’s Minsk agreement that was intended to end the fighting in eastern Ukraine. “The United States stands firmly with the people of Ukraine in the face of continued — I emphasize, continued — aggression from Russia and Russian-backed separatists,” Biden said after his talks with Ukraine’s President Petro Poroshenko.

Ukraine and the West have accused Russia of backing the rebels in eastern Ukraine with troops and weapons, accusations Moscow has denied. Fighting between Ukrainian forces and Russia-backed separatists has abated significantly since early September, after killing some 8,000 people since April 2014, but tensions remain high because of unresolved questions about the final political status of the rebel regions in the east.

“Moscow has to fully implement the Minsk agreement and work constructively with Ukraine to create the conditions for free, fair and safe local elections to occur in Donbas,” Biden said, referring to the collective name for the two rebel regions.

Biden also underlined that the U.S. will never accept Russia’s annexation[sic] of Ukraine’s Crimean Peninsula. “Moscow eventually has to end its occupation of Ukraine’s sovereign territory,” he said.

After a separate meeting with Ukraine’s Prime Minister Arseniy Yatsenyuk, Biden pledged that Washington will talk to its allies to make sure that Russia pays an increased price if it fails to meet its obligations under the Minsk agreement, but he emphasized that Ukraine has to fulfill its end of the deal.

“The Russians haven’t kept their part of their bargain, but you can’t, and the prime minister knows this, you can’t fail to keep your part, otherwise there are people in Europe (who) will say: ‘well, they’re both the same,'” he said.

Biden also stressed the need for Ukraine to ramp up the fight against corruption and undertake critical reforms.
“It’s absolutely critical for Ukraine in order to be stable and prosperous and part of a secure Europe to definitely, thoroughly, completely root out the cancer of corruption,” he said.