By New Cold War.org, Aug. 23, 2015, adapted from reports in Ukrainian media and other reports

According to an August 11 article in the Ukrainian news outlet ZN.ua, real GDP in Ukraine fell by 16.3% during January-June 2015, compared to the same period of 2014. The report is based on reporting by Ukraine’s Ministry of Economic Development and Trade. 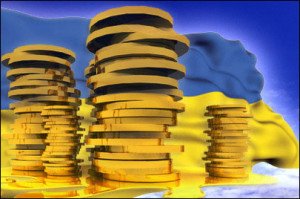 Bad economic news from Ukraine, but military spending is skyrocketing (image from ZN.ua)

The ministry expects an economic recovery of sorts in the second half of the year, resulting in an overall decline of 8.9 per cent for 2015.

The fall in GDP, the ministry explains, is first of all due to the geopolitical conflict in the country, which has led to the destruction of production facilities and transport infrastructure in the Donbas region. It is also caused by the loss of loss of logistical and cross-industry links with regional and foreign economies, the worsening of relations with Russia–a major trading partner, shortages of energy raw materials, notably coal, and a substantial increase in investment risks and negative expectations of the population.

The ministry also adds, “But another, significant negative impact on the economy of Ukraine in 2015 has been accumulated systemic imbalances, the consequences of which were the devaluation of the currency and inflation shocks.”

In the first half of the year, the decline of industrial production was 20.5%. The decline in agriculture was 9.3 per cent and exports collapsed by 35.4 per cent. The collapse of exports to Russia was particularly marked. Real wages in Ukraine fell 23.9%.

“In recent months, the economic situation has stabilized and positive trends are expected to revive economic activity in the second half of 2015,” report the ministry. “As a result, the decline in GDP for the year will slow to 8.9 per cent, while inflation is expected to reach 45.8 per cent (December to December).”

The 2015 state budget of Ukraine optimistically predicted a fall in GDP of 5.5 per cent with inflation of 26.7 per cent. These were the projections assumed in the $17.5 loan agreement (Extended Fund Facility) signed in March of this year with International Monetary Fund. But in the government’s first review of the agreement, last month, it increases the expected fall in GDP this year to nine per cent and says inflation will be 45.8 per cent. (See July 21, 2015 letter, 53 pages, to the IMF by the Ukrainian government, signed by President Petro Poroshenko, Prime Minister Arseniy Yatsenyuk, Finance Minister Natalie Jaresko and National Bank of Ukraine Governor Valeria Gontareva.)

Ukraine’s National Bank predicts a GDP decline of 9.5 per cent and inflation of 48 per cent.

Military spending by the Ukrainian government is set to rise to five per cent of GDP by 2020. It has hovered around 2.7 per cent for the past 15 years, according to several reports, including the CIA Factbook, but the money spent in real money has more than doubled during that time. The 2015 state budget projects military spending of 50 billion hryvnia. It was 12.7 billion in 2011 (actual spending) says Global Security.org.

The website reports on the budget approved by the Ukraine Rada on Dec. 11, 2014. It contained an ‘action plan’ for 2015-2020 which will see annual military spending rise to five percent of the country’s GDP. The plan also projects that Ukraine will formally end its neutral, non-bloc status and join NATO and for its armed forces to switch to NATO military standards by 2020.

Newsweek reported eight months ago that Ukraine’s military budget for 2015 would be double the previous year, rising to the equivalent of $3.2 billion. But the Stockholm International Peace Research Institute (SIPRI) reported in April 2015 that spending already reached $4 billion in 2014. It projects, “In Ukraine, spending on the armed forces is expected to double in 2015, but almost half of it will go to pensions. Systemic corruption may prevent much of the rest from reaching frontline troops.”

Most of the increased spending has gone towards personnel costs rather than arms acquisitions. SIPRI’s figures for Ukrainian military spending are considerably higher than most other sources as they include spending on :

Despite 14 per cent inflation, the budget for the regular armed forces will more than double in real terms. However, the effectiveness of Ukrainian military spending is severely compromised by:

According to data of the World Bank, Ukraine’s real GDP performance for the last 24 years has been the worst in the world, writes Sergey Korablin, a doctor of economics in Kyiv, in an August 22 article in ZN.ua.

Korablin writes that of 166 countries in the world whose GDP statistics are available to researchers, GDP growth for the period 1991-2014 declined in only five countries. Ukraine’s decline was 35 per cent. The other four, negative growth countries were Moldova (-29%), Georgia (-15.4%), Zimbabwe (-2.3%) and the Central African Republic (-0.9%).

During the first nine years of independence, in 1991,  Ukraine lost nearly 60% of GDP. Korablin says the domestic economy never recovered from that shock. “Neither quantitatively nor qualitatively.”

“The beginning of the current crisis is usually associated with last year’s change of political power in Kiev. But that just added to the slide to the bottom of the economic hole in which the country landed nearly a quarter of a century ago.”

From 1990 to 2008 the share of machinery in the structure of industrial production in Ukraine has changed from 31% to 14%.

In 2009, Ukraine’s Gross Domestic Product fell by 14.8 per cent, which was one of the worst indicators of GDP growth in the world. In the same year, industrial production fell by 25. per cent.

In February 2010, Doctor of Economics Sergey Korablin wrote: “In the early ’1990s, few would even imagine a risk of conversion of Ukraine from a country of industry to one of extraction of raw materials. Today, it is no longer a risk or threat but a fait accompli, and hardly causing any discussions.”