In rich societies, scarcity is a crime 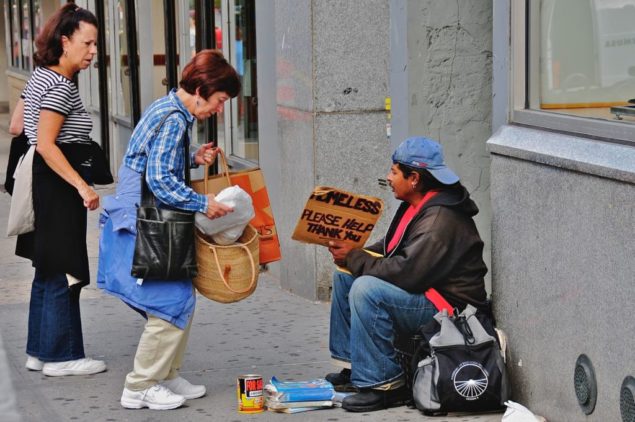 In recent weeks, we’ve been considering how our societies became more individualized and why workers need to help direct a society that better serves collective interests. Yet we also need to understand how the current way we organize society isn’t serving us well.

In recent weeks, we’ve been considering how our societies became more individualized and why workers need to help direct a society that better serves collective interests. Yet we also need to understand how the current way we organize society isn’t serving us well.

Scarcity: Why Having Too Little Means So Much by Sendhil Mullainathan and Eldar Shafir is a book that has stayed with me since I read it five years ago. It’s not a left-wing text, and I’m sure there’d be things I’d disagree with if I reread it today, but their examination of how experiences of scarcity alter the ways that people think and act in the world is incredibly instructive, particularly now.

Mullainathan and Shafir compare the brain to a computer, in that it has a certain amount of mental bandwidth to process our thoughts and actions. However, when we experience scarcity — a lack of time, food, money, etc. — that bandwidth and our mental capacity is diminished. In times of personal crisis, people’s minds uncontrollably focus on what is lacking, making it more difficult to keep up with other responsibilities they have in their lives at no fault of their own.

Quite obviously, the poor are most affected, as a lack of money is likely to lead to experiencing scarcity in multiple areas at once. Mullainathan and Shafir assert that doesn’t mean “that poor people have less bandwidth. Quite the opposite. We are saying that all people, if they were poor, would have less effective bandwidth.”

Thus, if we want all people to be able to live their lives to the fullest and spend their time working to better themselves and their communities, we need to build a society that frees people of scarcity that, in so many cases, is artificial. There isn’t truly a lack of food or money, for example, we just allow some people to hoard and waste it while others go without.

The pandemic provides a good example of this: In response to a completely unexpected crisis whose scale is only beginning to sink in, the Canadian government responded with unprecedented spending to keep people and businesses afloat.

The most notable of these programs was the Canada Emergency Response Benefit (CERB), which provided $2,000 every four weeks to more than 8 million Canadians. In practice, the money was given to anyone who applied for it, and since the program excluded many poor people, they applied for it anyway. There’s now a debate over whether they should have to pay it back. (They shouldn’t.)

At Passage, Rob Rousseau wrote that the CERB made the pandemic “the first period since I lost my 9 to 5 ad agency job several years ago that I haven’t been constantly anxious about my phone or internet bill, or grocery money, or gas, or rent.” He’s just one of many people who were able to spend more time with family and on leisure activities instead of worrying whether they’d earn enough to cover the bills.

The government recently announced that the CERB will be wound down in the coming weeks and the people on it rolled into a revamped employment insurance system, the details of which haven’t been announced. But the security that people experienced on the CERB will not and should not simply be forgotten.

Mullainathan and Shafir include cash transfers or a universal basic income as part of the solution to the scarcity they describe, in addition to addressing late fees, payday lenders and other services that take advantage of the poor. And while I agree that income support can be a short-term solution, we can’t simply stop there.

In This Life: Secular Faith and Spiritual Freedom, author Martin Hägglund explains that under capitalism the social wealth of our society is measured by how much profit is produced, but that doesn’t translate to a material improvement in most people’s lives. Rather, to increase our “collective liberation,” we should be measuring “our actual capacity to produce the goods that we need and our actual capacity to reduce the socially necessary labor time.”

Right now, increases to productivity and investments in automation benefit bosses and company shareholders, not workers and the broader society. These things should be giving us more free time, but instead they make our lives more precarious. A socialist society must change that reality.

That’s part of the reason I call for public luxuries, not simply a basic income. Yes, income support may be helpful in the short term, but it’s not sustainable. Ultimately, we must use our society’s social wealth to take more services out of the market system so people don’t need to worry about money in order to access them. It’s a completely different way of organizing society, and one that would vastly reduce the scarcity most people feel in their everyday lives.

Perspectives from around the world

James Wilt, author of Do Androids Dream of Electric Cars?: Public Transit in the Age of Google, Uber, and Elon Musk, reports on the growing movement to not only restore public transit systems, but to improve them and remove fares in the aftermath of the pandemic.

David Suzuki, the award-winning author and former host of The Nature of Things, argues the pandemic must be the catalyst for a four-day workweek

Dan Darrah, a Toronto-based writer, explains why Toronto needs an unprecedented bailout after the pandemic has shown the decades of downloading service-provision onto municipalities is unsustainable.

Adam Tooze, author of Crashed: How a Decade of Financial Crises Changed the World, reviews four books on the complexity of the growing US-China tensions and why the “new Cold War” framing doesn’t capture what’s happening.

Nathan J. Robinson, editor of Current Affairs, explains how our current media system puts the truth behind a paywall and leaves the lies accessible to all.

Liam Young, a United Kingdom Labour candidate and worker at the Communication Workers Union, makes the case for universal basic services as a new model of collectivism.
This week on Tech Won’t Save Us, I spoke to architect and activist Tania Davidge about Citizens for Melbourne’s campaign to keep an Apple Store out of Melbourne’s central public space, Fed Square. For Tribune, I also wrote about why we need to take on the pandemic profiteers.

Paris Marx is a Canadian writer, traveller, and socialist. They are currently completing a graduate degree in geography at McGill University in Montreal.