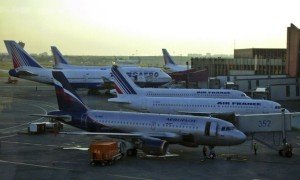 The mutual bans, which begin Oct. 25, underline the fierce tension that remains between the countries over Russia’s backing of separatist [sic] militias in eastern Ukraine. Although fighting between the separatists and Ukrainian forces has quietened in recent months, a firm resolution of the conflict appears to be distant.

More than 8,000 people have been killed since the fighting began in April 2014, according to UN estimates.

Ukraine last week placed sanctions on about 20 Russian airlines including Transaero and Aeroflot, the country’s flag carrier. Announcing the measures, Prime Minister Arseniy Yatsenyuk said that “Russian planes with the Russian tricolor have no business in Ukrainian airports,” according to the Ukrainian government’s website.

Under Ukraine’s ban, its airspace will also be closed to Russian flights carrying military or dual-purpose material.

The measures will severely limit the air connection between the two former Soviet neighbors, leaving only a few airlines unaffected by the ban and potentially forcing travelers to switch to overland transportation or fly more expensive routes via other countries.

Ukraine is banning flights by Russian airlines from Oct. 25 as part of a wave of sanctions against Russia over its support for separatists [sic] in the east of the country, the government said Friday.

Kiev said last week it was imposing restrictions on more than 90 companies or groups, mostly from Russia, and including airlines Transaero and Aeroflot, the national flag carrier.*

Spelling out the details of the sanctions, Prime Minister Arseny Yatsenyuk told a government meeting: “In accordance with a decision by the Security Council, the government of Ukraine is adopting a decision to ban flights by Russian companies, primarily Aeroflot and Transaero, to Ukraine.”

The government website quoted him as saying: “Russian planes with the Russian tricolour have no business in Ukrainian airports.”

He added that any Russian planes carrying military hardware or troops had also been banned from flying over Ukrainian territory. The Ukrainian aviation authority later said the ban would be enforced from Oct. 25.

Ukraine has accused Russia of sending arms and troops to help pro-Moscow separatists fighting its soldiers in the east of the country, in a conflict which has killed nearly 8,000 people since April 2014. Russia denies involvement.

Ukraine has also imposed sanctions on around 900 individuals for what it calls reasons of national security.

Aeroflot said it had not received formal notification of the decision from Ukraine. “Only when and if Aeroflot receives official notification from the aviation authorities of Ukraine that flights have been cancelled will the company inform passengers and explain the rules on ticket reimbursement,” it said in a statement.

Ukrainian state organisations were banned from using goods or services produced by sanctioned Russian companies. “The government is insisting on the immediate implementation of all sanctions defined by the decision of the Security Council,” Yatsenyuk said.

*  On September 16, Ukrainian President Petro Poroshenko signed a decree unveiling sanctions for one year against 388 individuals and 105 legal entities, including Russian flag carrier Aeroflot and around 20 Russian airlines that have been banned from flights, air haulage services or transit flights via the Ukrainian territory.)