In Bolivia, democracy has been thrown to the lions 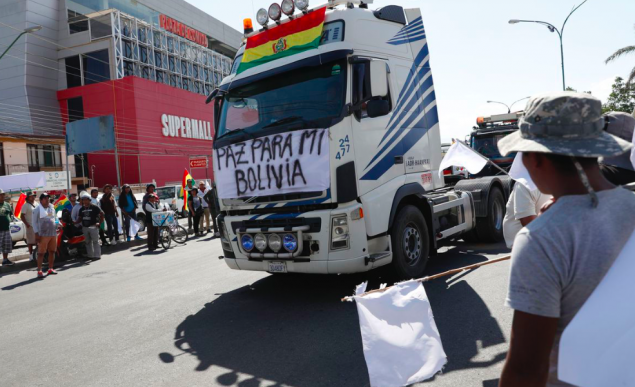 A truck passes with a sign reading in Spanish “Peace for my Bolivia” during a truck drivers protest asking for peace and roads without blockages in Cochabamba, Bolivia, Wednesday, Nov. 20, 2019. Bolivia has been in a state of turbulence since a disputed Oct. 20 vote.
Juan Karita / AP

In this Globe and Mail editorial, there are several very important messages about the recent christian fascist coup in Bolivia: that there are serious doubts about Jeanine Anez’s claim to the presidency; she has signed a decree shielding security forces from criminal prosecution when dealing with protesters, many of whom are Indigenous; and she has begun to adjust her country’s foreign policies, cutting off relationships with the socialist countries that Mr. Morales, himself a socialist and of Indigenous descent, had established.

As well as concluding that this is a coup, the editorial also asserts that Anez has no mandate to do any of these things. And yet Canada and other countries are tentatively supporting her government – “in the name of democracy.”

Furthermore, no one is disputing that Evo Morales won the election and no irregularities have been found…

When is a coup not a coup? That’s the question roiling Bolivia, where people are being shot in the street by forces supporting an interim government whose legitimacy and intentions are in doubt.

Five people were killed this week in the city of El Alto, where protesters loyal to the ousted president, Evo Morales, have blockaded a fuel depot for weeks. Last week, at least eight Morales supporters were killed and dozens were injured in the city of Sacaba, after security forces fired on them.

The interim government of Jeanine Anez Chavez has vowed to end these protests, which have crippled the country ever since a contentious national election on Oct. 20.

But while there are serious doubts about Ms. Anez’s claim to the presidency – her only incontestable authority comes from her backing by Bolivia’s military and police – she has begun to take actions outside the purview of a caretaker government that is supposed to work toward reconciliation and quickly call another election.

Ms. Anez, who is of European descent, has injected Catholicism into her government’s ceremonies, even though Bolivia is a secular state under its constitution. As well, she has formed a government in which only one minister is Indigenous – in a country where 60 per cent of the population is Indigenous.

Last week, she signed a decree shielding security forces from criminal prosecution when dealing with protesters, many of whom are Indigenous. And she has begun to adjust her country’s foreign policies, cutting off relationships with the socialist countries that Mr. Morales, himself a socialist and of Indigenous descent, had established.

Ms. Anez has no mandate to do any of these things. And yet Canada and other countries are tentatively supporting her government – in the name of democracy.

That’s because Mr. Morales himself tested the limits of Bolivian democracy by running for a new mandate, and because there are concerns about the Oct. 20 election that he appeared to win.

Originally elected in 2006, Mr. Morales was Bolivia’s first Indigenous president, a historic achievement in a country whose Indigenous peoples had long been treated as second-class citizens.

In 2009, he brought in a new constitution that included a provision limiting presidents to two terms. He counted his next two election victories as terms one and two, and then decided he wanted a third. He tried to ratify the constitution through a referendum but failed, so he took his case to the country’s supreme court, which allowed him to run.

That ploy lost Mr. Morales numerous supporters. Even though his time in power has seen the economy grow and inequality shrink, many voters didn’t have an appetite for an autocratic president-for-life.

Then, in the Oct. 20 election, strange goings-on made the public doubt the results.

In Bolivian national elections, the winner has to reach 50 per cent of the popular vote, or lead the next closest candidate by 10 percentage points, to avoid a runoff.

As the results came in, an unofficial count tallied by computer showed Mr. Morales leading by fewer than 10 points, with more than 80 per cent of ballots counted. Then the computers mysteriously went down. When they came back on a day later, Mr. Morales had the 10-point lead he needed.

The Organization of American States, which investigated the election results, said there was “clear manipulation” of those so-called “quick count” numbers.

But the OAS was more nuanced in its analysis of the final, legally binding tally in which Mr. Morales won a clear victory, saying only that it couldn’t verify its authenticity owing to lapses in best security practices.

Mr. Morales is no angel, and he overstayed his welcome. But given that no one is disputing that he won the vote, the most democratic outcome would have been to allow him to take part in a new election, or in a runoff.

Instead, protests and riots orchestrated by his opponents, and the loss of support of the military, forced him to resign and leave the country. In his stead is an interim government that has begun to purge Bolivia of his legacy, even though it has no democratic mandate to do so.

It’s hard to see how that is not a coup. Countries backing the Anez government should withdraw their support and demand a new election immediately.

Álvaro García Linera on the hatred of the Indian

Bolivia: they are killing us, comrades!

Evo Morales: “Nationalization of resources is conflict’s cause”- “They do not accept that Indians govern”

In Bolivia as in Palestine