IMF’s reputation on the line in Argentina 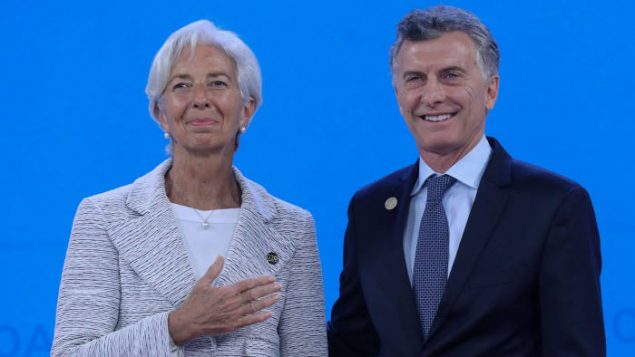 When the IMF completed its third review of Argentina’s economy in early April, managing director Christine Lagarde boasted that the government policies linked to the country’s record $56bn bailout from the fund were “bearing fruit”.

Less than a month later, amid darkening political prospects for incumbent president Mauricio Macri, the country’s currency crisis reignited and bond yields spiked, threatening not only the IMF’s Argentina programme but its reputation and that of its leader.

Argentine assets have stabilised somewhat in recent weeks, with the country’s central bank now allowed to use IMF resources to intervene in the peso. But many analysts and investors are concerned that the programme is fraying and could collapse if the populist opposition, led by former leftist president Cristina Fernández de Kirchner, wins the presidential election in October. A victory would be devastating for the IMF given its strong backing of Mr Macri.

“This is the biggest single programme that they’ve ever put up, and their reputation is on the line,” said Bill Rhodes, a former top Citi executive with wide experience handling past Latin American debt crises.

Even former senior fund officials are concerned by the organisation’s exposure to Argentina, and the potential fallout should its biggest ever programme implode.

“Lagarde has really gone out on a limb for this programme and has been supporting it wholeheartedly,” said Claudio Loser, former head of the IMF’s western hemisphere department during Argentina’s historic debt default in 2001. A failed programme would lead to a “loss of credibility” for the fund, he adds. 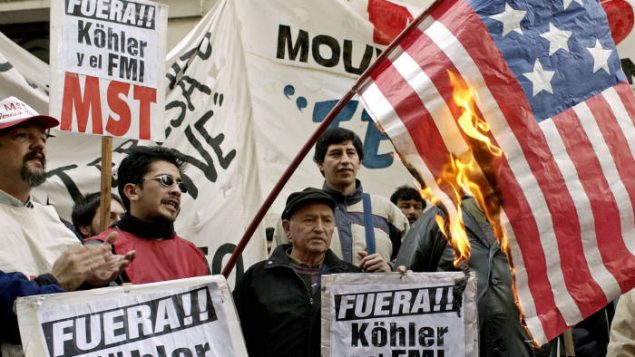 Argentine demonstrators burn a US flag and protest against the IMF and its then chief Horst Koelher in 2003. Argentina has signed 22 agreements with the fund, most of which ended with bitterness on both sides © AP

Plans have already veered off course significantly, with Mr Macri forced to return to the IMF to revamp the deal scarcely three months after the original agreement was unveiled in May last year. In September, the IMF announced it would lend an additional $7.1bn to Argentina and allow the country to receive more cash upfront in exchange for a harsher austerity programme.

The deal required Argentina to run a balanced budget by 2019 and to shrink its external deficit. On both counts, the country has seen success.

By the end of last year, the primary fiscal deficit sat at 2.6 per cent of GDP — lower than the IMF’s target and a far cry from the 3.8 per cent level posted in 2017. Argentina has also made strides on the trade balance, which has swung from a large deficit to a surplus of $1.18bn as of March, amid a deepening recession.

“There have been significant changes in the Argentine economy — from reliable official data to important fiscal and external sector improvements — and we want to help Argentina continue this process of transformation,” said one IMF official involved in the programme. “It is challenging and we feel a sense of responsibility in trying to help the country in this effort.”

Yet on other metrics, Argentina has struggled. Inflation remains elevated at nearly 55 per cent, despite the central bank tightening the monetary screws. Povertylevels have also skyrocketed to more than 30 per cent of the population, dredging up haunting memories of past crises and IMF programmes.

For many locals, the IMF has become a comic-book villain given its long and chequered history with the country. Since it first sought the fund’s help in 1958, Argentina has signed 22 agreements with it, most of which ended with bitterness on both sides.

Few forget the disastrous finale of the IMF’s last Argentina programme, when, just two months before the country defaulted in 2001, it borrowed another $8bn from the fund — most of which was used to buy pesos from institutional investors wanting to get out of Argentina.

“Obviously, the IMF does not want to make the same mistake again,” said one former IMF staffer. “But it is a very different organisation from when it last got burnt in Argentina.” 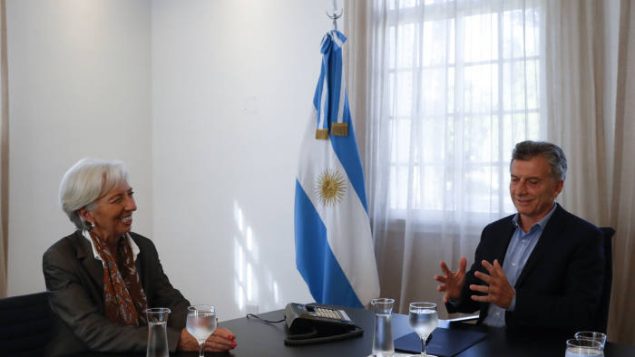 For one, the IMF has placed an inordinate emphasis on “protecting society’s most vulnerable” when discussing its austerity package. In fact, the IMF’s current programme is the first to allow the country to exceed its fiscal deficit target if the additional spending is to be used for social assistance.

In light of recent market ructions, the IMF has also shown flexibility in the government’s economic policies, with both the IMF and Donald Trump, US president, expressing their support as recently as last week of the course of action taken by Mr Macri.

In mid-April, Argentina relaunched a controversial programme of price controls in the hope of providing some reprieve for locals. Weeks later, the central bank announced it had full discretion to intervene in the currency market whenever it saw fit, a sharp divergence from the free-floating currency principle once espoused by the fund.

“We are working with the authorities to overcome the current difficulties and this implies a degree of flexibility to adapt when circumstances change to maintain the core objectives of the programme,” said the IMF official.

Mr Macri’s approval ratings have tanked with the economy. But according to Mark Sobel, a former senior US Treasury official and executive director at the IMF, staying the course with the fund’s programme is his best bet to beat Ms Fernández should she choose to run.

“If this programme is carried out, Argentina will turn around,” he said. “But if Kirchner wins and we see a return to the woefully errant policies of her and her husband, many will blame the fund and its reputation will suffer.”