IMF head is “extremely encouraged” by the economic disaster in Ukraine

Ukraine’s economy is in a severe freefall. GDP is expected to contract this year by  nine per cent. GDP fell by 14 per cent in the first six months of the year. Inflation is projected at 47 per cent for 2015. In 2014, the economy retracted by seven per cent and inflation was 24 per cent. 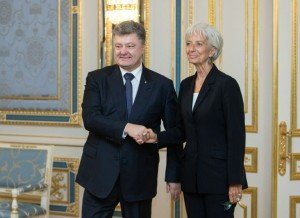 Exports from Ukraine to the European Union collapsed by 35 per cent in the first six months of 2015 compared to the same period in 2014. The drop in exports to Russia was even sharper. The country’s debt to GDP ratio is rising. The government in Kyiv is cutting spending on pensions, medical care and health care while it is sharply increasing its military spending. It has recently told its non-government debtors that 20 per cent of the money they are owed will not be paid to them, a so-called ‘haircut’ which they must swallow.

According to the enclosed news report by AFP, the managing director of the International Monetary Fund finds something “encouraging”, nay, “extremely encouraging” in all of this. What Christine Lagarde means by her bizarre pronouncement is that the deal with creditors to lop 20 per cent off of what they are owed means that the Ukrainian government has avoided going into default AND it gains a longer repayment period for the $11.5 billion in new loans which the IMF promised to Ukraine in March 2015. Translating that into IMF-speak, it means that Ukraine continues to hand over its economic sovereignty to the imperialist financiers in the IMF and other Western-controlled financial  institutions. The 20 per cent “haircut” has bought bought short-term avoidance of default, but its terms will tighten even further the control by foreigners over Ukraine’s budget.

The government’s next magic act is to figure out what to do with the $3 billion loan it owes to Russia, payment of which is due in December and which, to make an understatement, it does not have the funds to pay. That debt is “official debt”, meaning it was contracted with another government. According to IMF rules, failure to meet the payments of official debt automatically means the delinquent country enters into default and is disqualified from further IMF loans (aka further financial ensnaring).

“I’m extremely encouraged by the progress that you have been achieving (over) the past few months,” Lagarde said at a press conference alongside Ukrainian President Petro Poroshenko.

“As I told you in a previous discussion, Ukraine has surprised the world.”

Lagarde added a few words of caution, though, saying, “This is not the end of the road. You started the journey… reform is a process.”

On August 27, four commercial lenders agreed to a 20 percent write-down on their portion of Ukraine’s sovereign and sovereign guaranteed debt.

The accord provided “immediate debt relief” of around $3.6 billion (3.23 billion euros), according to Ukrainian finance ministry figures.

The deal also extended repayment of $11.5 billion by four years, and allowed Kiev to avoid what otherwise would have been inevitable default.

The IMF and United States put bondholders under intense pressure during the five-month negotiations to accept short-term losses in return for preventing Ukraine’s pro-Western leaders from being forced into resuming their reliance on Russia.

The IMF said the deal will help the government reduce costs as required under a $40 billion rescue programme it designed earlier this year.

The agency will send an assessment mission to Ukraine later this month to monitor compliance with the programme, Poroshenko said.

Collapse of Ukrainian exports to Russia and Europe in first six months of 2015, news compilation on New Cold War.org, Aug 20, 2015