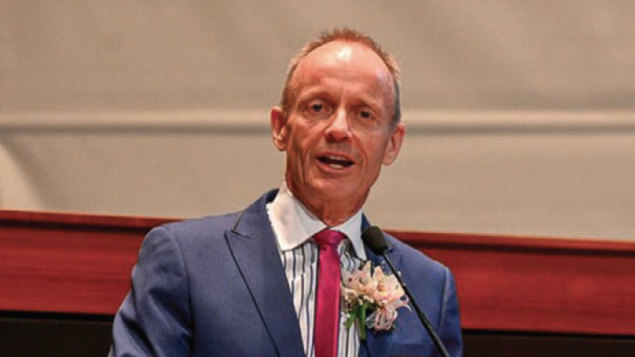 The forum, held in Vancouver on March 22, initially avoided mentioning Huawei and arrested CFO Meng Wanzhou by name – until Day delved into what he called “the elephant in the room.”

Day noted his role on the board of directors for Telus (TSX:T), which has repeatedly stated it does not believe Huawei components in Canadian telecom networks pose a security risk. Telus has used Huawei equipment in non-core parts of its 3G and 4G networks, and has also said its 5G network would be hit with delays if Ottawa decides to ban the Chinese tech giant from participating.

“We’ve had a very successful relationship with Huawei for a number of years,” Day said. “We developed ways, which we have shared with the Canadian security establishment on a technological basis, in terms of making sure there aren’t any concerns with the equipment. There are certain elements of Huawei equipment that we do not have in our core, nor do we intend to. There are many elements of their equipment that are state-of-the-art, and we do incorporate those – as do telecom companies in about 120 companies around the world.”

Day added that Huawei 5G technology has not been completely banned in places like Great Britain and Germany, and Ottawa should follow suit.

“Some people say that the U.S. is using security concerns as a non-tariff barrier,” he said. “I will let you decide if they are doing that or not. But if our government … determines that the technology is sound, then we need to boldly say that to the United States. And we need to tell them that if Canada continues to use Huawei equipment – as 120 countries do – we do not want to see any retaliation against us because of their determination of Huawei.”

The Chinese tech firm has been a prime target for U.S. authorities, who allege that Huawei circumvented sanctions by doing business in Iran, and laundered the proceeds through U.S. banks while stealing technological secrets from American rivals.

Meanwhile, U.S. officials have accused Beijing of  using Huawei’s network to spy on other countries – a charge that Huawei has denied.

Meng was arrested in Vancouver on December 1 on an extradition request by the United States, and Washington continues to wage a tariff war with Beijing after talks broke down earlier in May.

U.S. President Donald Trump has tweeted that Meng could serve as a bargaining chip in the negotiations, which has prompted accusations that the U.S. extradition request may be politically motivated.

Day acknowledged that the situation – especially now that two Canadian citizens are detained in China and face espionage charges – is serious. But he also noted that China’s ongoing One Belt, One Road (OBOR) initiative presents a major opportunity for Canadian small businesses, especially considering that China is aware that it needs sustainable, clean energy and resources – something that Canada can provide.

“We have a degree of complacency here in Canada because we have a small population with a large resource base, which allows us to live fairly comfortably,” said Day, who is also on the board of the Canada China Business Council. “But there’s something going on in many other places in the world now that we are in danger of being excluded from. We need to elevate our vision on where we want our goods to ship to.”

Gordon Houlden, director of the University of Alberta’s China Institute, agreed with Day’s assessment. Houlden, a former diplomat with stints in Beijing, Hong Kong and Taipei, said he doesn’t share concerns that the trade deficit Canada has with China would widen if the two sides expand their business relationship.

“To try to balance your trade with every country – as President Trump is trying to do now – I think it’s a mistake,” Houlden said. “I think it’s enormously distorting to your economy if you achieve that, and it also means you have to be restrictive on your imports, which harms your domestic economy…. About 64% of Canada’s GDP is dependent on trade. We really need foreign trade, and what’s important is the overall magnitude of trade.”

Shao Wei, partner at the Canadian operation of global law firm Dentons and an expert in China-related business transactions, said another indication of Beijing’s acceptance of greater foreign investment came on March 15 with the passing of the new foreign investment law, which promises more transparency for foreign investors and companies doing business in China by January 1, 2020.

The new law is widely seen as Beijing ceding ground to the United States in the ongoing trade talks; and while the legislation lacks specifics, the overarching intention from Beijing is an important indicator, Shao said.

“This new law was approved in only four to five months, so there was clearly a fast-track system,” Shao said. “It demonstrates the political will … and it is widely seen as China’s reply to international complaints of forced technology transfer from companies doing business in China. So I think this is a milestone in terms of China providing a legal framework to that end.”

Ultimately, Day said, even with Canada’s relationship in China in deep-freeze and with some commodities like canola being affected, long-term trade with China cannot be ignored if Canadian businesses are looking for major gains.

“People have said this whole OBOR thing, China could be using it for dangerous purposes, and there could be danger associated with this,” Day said. “Folks, I’m sure that the first time people discovered fire, there was someone who jumped back and said it shouldn’t be used because someone could get burned. I’m sure when they invented the wheel, the first time the wheel ran over someone’s foot, someone would say to put it away…. Of course we recognize there are negative sides to this, but we can’t overlook the positive opportunities that are there.”