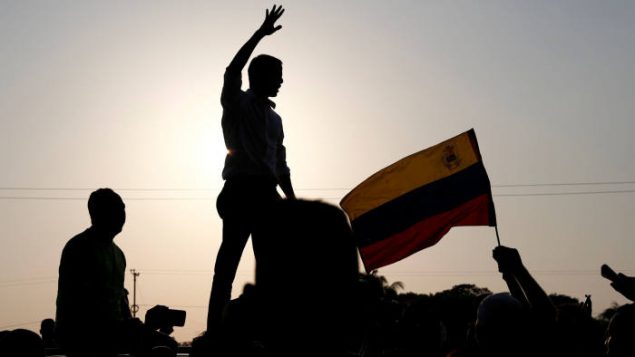 Beijing had tried to exclude a board member appointed by Venezuela’s opposition leader Juan Guaidó from the Inter-American Development Bank annual meeting in Chengdu, China © Reuters

The original and very misleading headline was:

The Inter-American Development Bank has scrapped plans to hold its annual meeting in China next week after Beijing excluded the newly appointed board member from Venezuela chosen by opposition leader Juan Guaidó.

On Friday evening the IDB released a statement saying its directors had decided to change the location of its annual meetings with a recommendation to come within 30 days. The planned meeting between March 28 and March 31 in Chengdu, China, would “not be held”, it said.

The extraordinary cancellation of the annual meeting of a multilateral development bank a week before the gathering highlights the extent to which the IDB has been caught in the middle of the economic and strategic rivalry between Washington and Beijing. It reflects similar challenges for institutions ranging from the International Monetary Fund to the World Bank and the World Trade Organization.

“China’s refusal to abide by @the_IDB rules and its obstruction of democratic transition in Venezuela demonstrate its unreliability as a partner and indifference to Latin America. China chose to side with Maduro and his crooks,” Garrett Marquis, the US National Security Council spokesman, tweeted on Saturday, referring to Beijing’s backing for the government of Nicolás Maduro. The US and many other countries consider Mr Guaidó the legitimate ruler of Venezuela. “China chose poorly,” Mr Marquis added.

The IDB’s decision to hold its annual meeting in China reflected the growing importance of Beijing as a trade and investment partner for a wide range of Latin American nations. The US, however, had become increasingly irritated by the IDB’s choice in recent months. In November David Malpass, the US undersecretary of the Treasury for international affairs and Washington’s nominee to lead the World Bank, had urged the IDB to reconsider holding the meeting in China, as he warned Congress that Beijing’s “geopolitical” influence was rising inside the multilateral development banks.

The IDB pressed ahead with its plans despite the US opposition, but the situation became untenable after its board last week approved Ricardo Hausmann, a Harvard economist chosen by Mr Guaidó, as Venezuela’s representative, de facto recognising him as the country’s legitimate leader.

While the US, Canada and many Latin American and European countries have recognised Mr Guaidó as the leader of Venezuela, China, Russia, Cuba and some other nations are still recognising Nicolás Maduro as the president.

Ahead of the annual meeting in Chengdu, Chinese officials had asked to “depoliticise” the gathering by not inviting any representative from Venezuela, but this was seen as a breach of diplomatic norms by the board, according to one person with knowledge of the situation.