‘I watched the terrifying way in which we Judaize the land’: an eyewitness account of the Sur Baher home demolitions 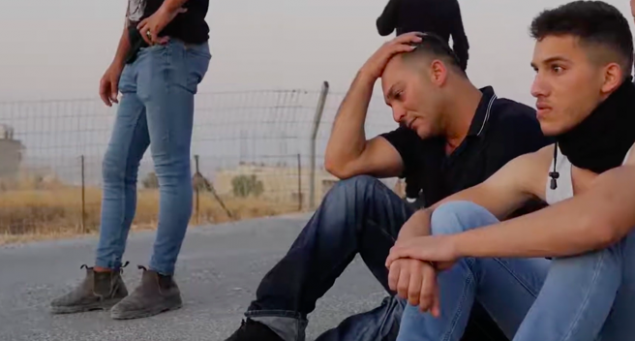 Ismail sits with one of his sons after being thrown out of their home. (Screenshot from Yuval Abraham’s film “A Dark Night in Wadi al-Hummus”)

And then the State of Israel demolished his home. Israel the racist, Judaizing, colonialist state that I’m embarrassed to be a citizen of. Tens of cops busted in. I was there. I saw the rage and the humiliation that filled Ismail’s eyes, and his children’s eyes, when they were pushed aside by the police and looked at their home from afar, knowing it’s about to be razed.

Translator’s note: Below is the testimony of Yuval Abraham, a filmmaker and journalist, who stayed with a family in Sur Baher the night their home was demolished by Israeli forces. Abraham’s account, translated from Hebrew, was originally published on Facebook and addressed to fellow Israeli Jews. The story of Ismail’s family, described here through Abraham’s eyes, is one of many. That night, 72 other families had their homes demolished by Israeli forces. Abraham and filmmaker Rachel Shor made a short film about these events, available at 972 Magazine: A dark night in Wadi al-Hummus. — Yarden Katz

I’m mentally exhausted. I spent the night in Sur Baher. I saw with my own eyes how they ruined Ismail’s life and his home. A gentle man, with kind eyes. He planned every detail in his home. “My dream home,” he told me at three o’clock in the morning, before the catastrophe, as his foot was shaking. He kept saying, I wish it won’t happen. I wish they won’t destroy [my home]. The kitchen cabinets were painted bright pink, the style he loves, that he picked, and the walls of his four-year old daughter’s room were soundproof and insulated, to prevent the room from overheating in the summer. He sent her to sleep at her grandfather’s. His other kids were home. Everyone’s awake. Scared to death that the monster might come.

His voice trembled as he spoke of his kids. He didn’t look me in the eye. He kept repeating one thing: I want to speak with the judge who approved this. Help me find the judge. I just want to explain to him, I want him to see me, I want him to understand you can’t throw us out in the street. When Ismail told me he feels that he’s failed as a father, that he can’t protect his own children, he teared up.

And then the State of Israel demolished his home. Israel the racist, Judaizing, colonialist state that I’m embarrassed to be a citizen of. Tens of cops busted in. I was there. I saw the rage and the humiliation that filled Ismail’s eyes, and his children’s eyes, when they were pushed aside by the police and looked at their home from afar, knowing it’s about to be razed. The children screamed in pain. My body trembled, and their eyes reddened from the tear gas. Ismail was shaking all over. He cried, he hugged them and cried. He has no money, he has no way to build another home, he put all his savings in this one. The sun was rising, and the cops yelled at us to get out. To leave the place. The violence was vicious. The cops dragged everyone outside, strangled the family. I was searching for the cops’ eyes. One cop’s cell phone rang, and it was a popular tune, a happy one, a tune I listen to sometimes.

Area A, the zone where the house was built, is nominally under the control of the Palestinian Authority. But Israel, in order to have as much land as possible on its side of the wall, blocked the PA from accessing this particular stretch of land. The families living in the area are therefore in limbo. They had to provide all the basic services for themselves – water, electricity, roads. Israel gives them nothing but is perfectly willing to destroy their homes.

But the wall is a lame excuse. It’s perfectly obvious to everyone living in the village that it’s easy to cross the wall. Tens of thousands of Palestinians do it daily. Whoever wants to bypass the wall and hide in some home could do it without a problem. What’s more, there are some homes near the wall, in Sur Baher, that had only one floor demolished by Israel, which totally contradicts the idea these homes pose security threat. Is a house with two floors more dangerous than a house with one? And even if there was some security concern, it’s illogical to destroy a whole home when there are hundreds of other solutions. Ismail begged the police to let him be on guard at his home, himself, every night, or that they’d let him put security cameras near the home, or that the state would work with his sons to make the wall even taller, so that no one could pass through. It was awful, that supplication.

No, this is not a security matter. Don’t be fooled. Tonight, I watched the terrifying way in which we Judaize the land. We Judaize the land. Whoever finds this phrase difficult to understand, “Judaizing the land,” needs to reevaluate things and start reading. Read about what’s happening between the river and the sea, in East Jerusalem, in the Negev, the Galilee, the West Bank, read about discriminatory development plans that suffocate whole Palestinian towns and prohibit them from expanding, about state expropriation of lands, about villages in the Negev that are behind destroyed and Jewish settlements being erected in their place, about expulsions in the Jordan Valley, in the south of Mount Hebron, about the Nakba that never ended in this entire region. Whoever really wants to move beyond the state of ignorance we’re all indoctrinated into can come talk to me and I’ll help him/her. If you really care about security for Israelis, let’s make sure there’s security for Palestinians, and that we stop ruining their lives and expelling them from their lands and homes.

I can’t take it anymore. I’m suffocating from all this violence and the lives being destroyed. And everyone here is oblivious, blathering about a Jewish state, they don’t know Arabic and are utterly blind to those other people. Everyone who keeps silent is complicit with this filth. They destroyed Ismail’s life tonight. When I left, an hour ago, he was staring into space and muttering to himself. I saw that sparkle in his eye was gone.