Huge munitions depot up in flames in Kharkiv region of Ukraine, nearly 20,000 evacuated 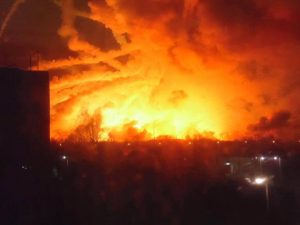 Thousands of people have been evacuated from Balakleya in the Kharkov region of eastern Ukraine as a massive fire has broken out at a munitions depot, said to be the largest such depot in the country. There are reports of explosions and shattered windows. (Listen here to audio of explosions.)

Chaotic scenes with hundreds of vehicles stuck in traffic jams were reported on social media after the Balakleya city administration ordered an emergency evacuation of most of the city, population 20,000.

Videos uploaded by local residents show a huge blaze with what appears to be a missile flying off in a random direction and falling to the ground, as detonations are heard in the background.
Evgeny, who lives near the munitions depot, was one of the first to witness the inferno. He told RT that the incident has been downplayed by the Ukrainian media. “Ukrainian media report that nothing serious has happened, saying that just one explosion took place and no one was injured. But my friends and I, who saw [the incident] with our own eyes, say that… some people have been injured.”

Explosions are still occurring at the munitions depot, Evgeny said, adding that the entire city of Balakleya has been evacuated. The civil defense department of the city’s district administration earlier told RIA Novosti that most of the population of Balakleya had been evacuated. “The first wave of the evacuation has come to an end. Most of the population have been evacuated by buses. Now the buses are returning to evacuate the rest. Specialists are going from house to house checking who remains,” the district administration said.

There have been no immediate reports of any civilian casualty. A seven-kilometer (4.3-mile) safety zone has been set up around the burning depot, RIA Novosti reports, citing a Ukrainian military prosecutor.

Anatoly Matios, the chief military prosecutor of Ukraine, wrote on Facebook that according to preliminary data, the explosion and fire were caused by sabotage at 3am local time at several storage sites for rocket and artillery weapons (including 125mm and 152mm tank and artillery shells). Matios said the incident was the direct result of sabotage. An investigation has been launched.

Nearly 140,000 tons of ammunition are stored at the depot in Balakleya, the chief military prosecutor of Ukraine said on Thursday. “The total area of the arsenal is 368 hectares, with 138,000 tons of ammunition… An unmanned aerial vehicle (UAV) is getting ready for takeoff to establish the actual extent of the arsenal affected by the explosions,” Matios wrote on Facebook.

As residents hastily flee the area, RIA Novosti Ukraine reports that mobile networks in the city are overloaded or offline. 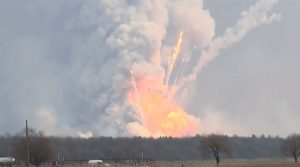 Powerful explosions forced thousands of people living in the Ukrainian city of Balakleya to abandon their homes in the early overnight hours on March 23 as a large ammunition depot went up in flames. Evacuees shared stories of chaos, fear and confusion with RT.

The latest footage from RT’s video agency Ruptly (link here, or click on screen below) shows scores of cars crammed along the side of the road outside Balakleya, located in the Kharkov Region. The majority of about 30,000 people living in the city had to use their vehicles as shelters while the emergency services struggled to contain the fire that has engulfed half of the depot, triggering a chain of ongoing explosions. An enormous inferno with volcano-like bursts scattering projectiles can be seen in the background.

Whole families, including the elderly and children, were waiting for permission to return home while relying on dry snacks, canned food and bottled water. The majority of residents were evacuated overnight, soon after the first blasts shook the town at 3am local time and before the area was put on lockdown and a 7-kilometer safety zone was enforced.

Witnesses say several roofs were blown off residential buildings and many windows were shattered by blast waves or exploding munitions. At least one house was seen caught up in the flames. There have been also reports of looting and theft.

While the exact damage to homes is still difficult to estimate, residents believe it will be a challenge for them to return to normal life. “It is very scary to go through this and go on living – to lose your job, house, flat – lose everything which has been earned over the years,” a local resident, who was working at the now devastated depot, told Ruptly.

“It happened at night. I heard some noise or shooting, looked out of the window and got up to hear the alarm. We took all we could and rushed into the basement to hide,” the man said, adding that they had to wait for a friend with a car to arrive to get them out of the city. “It was scary, very scary.”

People did not have much time to pack after they heard the blasts. “What could we possibly take with us? It took us about two minutes to get dressed and get out. It was very frightening. Our windows were shaking,” a woman recalled.

According to estimates by the Ukrainian authorities, it may take as long as a week for the munitions to stop detonating at the burning site. The losses to Ukraine’s arsenals are still to be evaluated after the fire subsides. “We need several more days…The situation can continue for three up to seven days,” Ukrainian Prime Minister Vladimir Groysman, who arrived in Balakleya on Thursday, told journalists.

Dozens of fire engines and heavy machinery have been stationed near the depot and a tent camp has been set up.

Ukraine’s military prosecutor Anatoly Matios attributed the large-scale incident at the depot that hosts nearly 140,000 tons of ammunition to sabotage, citing preliminary data. An investigation into the causes is under way.