How to negotiate with North Korea 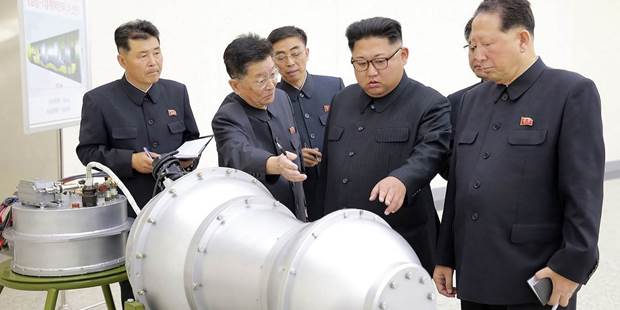 By Brahma Chellaney, Apr 23, 2018. North Korean diplomacy has established that it can no longer be treated as a ‘rogue state’ but must be part of a region-wide, stable, and permanent denuclearisation aimed at removing the threat of war from the region. This poses some tough choices for the United States; it must drop its long-held ambition of controlling the military alliances on China’s maritime border to suit its own interests.

SEOUL – North Korean leader Kim Jong-un seems to be setting the stage for an historic deal with US President Donald Trump that would allow his country, like Myanmar and Vietnam, to reduce its dependence on China and move closer to the West. But, despite declaring a moratorium on nuclear and long-range missile tests and dropping the demand that American troops withdraw from South Korea, Kim is unlikely to abandon North Korea’s hard-won nuclear-weapons program until a credible and comprehensive agreement is reached.

North Korea has conducted a total of six nuclear tests – the same number as India, whose formidable nuclear-weapons capability is beyond dispute. Kim’s emulation of India’s 1998 declaration of a test moratorium – which enabled talks with the United States and led eventually to a US law recognizing India’s nuclear arsenal – implies that he seeks international acceptance of his country’s nuclear status.

Of course, the US-Indian nuclear deal was made possible by post-Cold War strategic pressures, which are lacking in the context of the Korean Peninsula. Nonetheless, if Trump’s summit with Kim is to have a lasting impact, it is essential to move beyond simply trying to force North Korea to denuclearize and pursue a broader strategic deal aimed at opening the North to the world.

Historically, ending longstanding conflicts – for example, taming the Khmer Rouge, which had been responsible for the Cambodian genocide in the 1970s – has depended on comprehensive strategies that have not put disarmament first. There is no reason to believe that the situation will be any different with North Korea. After all, that country’s only leverage is its nuclear arsenal – and Kim knows it. The mere fact that he finally agreed to hold summits with South Korea and the US stems from his confidence in his country’s nuclear deterrent, however limited it may be.

Kim has already enshrined North Korea’s nuclear-weapons status in the country’s constitution and erected monuments to the long-range missiles launched last year. His moratorium on testing fits this narrative, as Kim presents himself as the leader of a nuclear-armed state embarking on potentially epoch-making diplomatic initiatives.

In this context, it is important to note that, while Kim’s peace overtures are motivated by a desire to rebuild North Korea’s sanctions-battered economy, sanctions alone did not change the behavior of a country long used to enduring extreme hardship. On the contrary, escalating sanctions helped to fuel North Korea’s nuclear and missile advances. Securing any kind of denuclearization, therefore, will demand a more effective economic opening.

America’s handling of the 2015 Iran nuclear agreement makes it even less likely that North Korea will agree to a narrow denuclearization accord. Even after signing the deal, President Barack Obama kept in place some strict economic sanctions, affecting, in particular, Iran’s financial sector. Making matters worse, Trump seems keen to follow through on his threat to withdraw from the Iran deal – or at least to add new sanctions – despite a lack of evidence that Iran has not fulfilled its obligations.

And yet, when it comes to North Korea, the Trump administration remains focused solely on denuclearization. To be sure, where nuclear proliferation issues are concerned, the US has a history of staking out a maximalist position publicly, but being more pragmatic in closed-door negotiations. For example, it tolerates the world’s fastest-growing nuclear arsenal in Pakistan, even though that country, in Trump’s words, has “given us nothing but lies and deceit,” including providing a “safe haven to the terrorists we hunt in Afghanistan.”

But Kim’s latest declaration that he has accomplished the nuclear-deterrent objective of his “byungjin policy” – the other objective being economic modernization – is not an empty boast. The North Korea challenge is no longer one of nuclear nonproliferation. Past agreements with the country, like that reached in 2005, are no longer relevant.

Of course, the risks posed by North Korea’s arsenal must be addressed. But rather than emphasize “denuclearization” – which implies a one-sided compromise – negotiators should seek to secure a nuclear-weapons-free zone (NWFZ) on the Korean Peninsula. This is also essential for realizing South Korean President Moon Jae-in’s vision of closer economic cooperation that harnesses the North’s natural resources and the South’s advanced technologies.

The NWFZ approach would entail concessions by all parties. Yes, North Korea would have to denuclearize. But all nuclear powers would have to forswear so much as threatening to use nuclear weapons on the Korean Peninsula. In addition, foreign warships carrying nuclear arms could no longer make port calls there.

For an NWFZ to be possible, however, South Korea would have to agree to be outside the US nuclear umbrella – not a particularly popular notion in the country. According to one opinion poll, most South Koreans want to go in the opposite direction, with  the US redeploying the tactical nuclear weapons it withdrew more than a quarter-century ago.

The problem with this approach is clear: If the South will not give up its effective nuclear deterrent, Kim will ask why the North should abandon its own. As Kim has pointed out, both Iraq’s Saddam Hussein and Libya’s Muammar el-Qaddafi met with gruesome ends after renouncing nuclear weapons.

Only a US-supported NWFZ can meet the denuclearization conditions to which Kim’s regime has alluded, including the removal of nuclear threats and a “commitment not to introduce the means to carry out a nuclear strike.” Elements of a NWFZ can realistically be negotiated alongside the provisions of a credible and comprehensive peace deal, though the negotiations will undoubtedly be difficult.

If the US needs added motivation to pursue this approach, it should consider this: it is China that faces the biggest challenge from North Korea’s nuclear weapons, as it works to supplant the US as Asia’s dominant power. The only way to mitigate the North Korean nuclear threat, without giving China the upper hand, is to show true diplomatic leadership in securing a comprehensive peace accord on the Korean Peninsula.

Brahma Chellaney, Professor of Strategic Studies at the New Delhi-based Center for Policy Research and Fellow at the Robert Bosch Academy in Berlin, is the author of nine books, including Asian Juggernaut, Water: Asia’s New Battleground, and Water, Peace, and War: Confronting the Global Water Crisis.