How the UK is violating international and domestic law 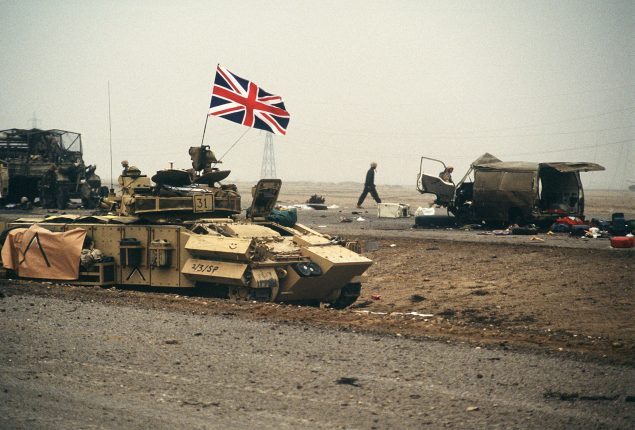 The British flag waves from an armored personnel carrier of the 7th Brigade Royal Scots as it advances along the Basra-Kuwait Highway near Kuwait City following the retreat of Iraqi forces during Operation Desert Storm.

During a discussion at the Johns Hopkins School of Advanced International Studies yesterday, United States Secretary of Defense Mark Esper claimed that North Korea and Iran ­– two countries that have drawn the ire of Washington in recent weeks – were “rogue states” that require our “constant vigilance.” The Oxford English Dictionary describes a rogue state as “a nation or state regarded as breaking international law and posing a threat to the security of other nations.” Yet historian Mark Curtis argues that if Esper wanted to find a country that routinely flouted international conventions and threatened the world, he could look much closer to home, to one of the U.S.’ key allies. In a new exposé published today, Curtis revealed 17 separate and ongoing British government policies that did so, leading him to label his own nation as a rogue state.

Many of the most blatant violations of international law stem from British actions in the Middle East. For example, the U.K. military has been operating a fleet of Reaper drones since 2007, assisting American missions. From four English bases, the Royal Air Force (R.A.F.) has remotely bombed Yemen, Pakistan and Somalia. Amnesty International, Curtis notes, described British actions as “absolutely crucial” to the American drone campaign providing surveillance, intelligence and logistical support. Last week MintPress reported on the new video game tool the U.S.A.F. is using to recruit new drone pilots.

The United Kingdom is also a close ally of Israel, aiding and enabling the state’s illegal aggression against and annexation of Palestine. Although barely reported, the Royal Navy “regularly collaborates” with their Israeli peers that enforce the blockade of Gaza, an action senior U.N. officials and human rights organizations agree contravenes international humanitarian law by enforcing collective punishment on a civilian population. Britain also continues to import goods from the illegal Israeli settlements, without even distinguishing them as such.

The U.K. is a key enabler of Saudi crimes in Yemen. The U.N. claims that Yemen has “all but ceased to exist” as a state and estimates 24 million Yemenis are in desperate need of humanitarian assistance as the country is racked by famine, disease and war. According to the Stockholm International Peace Research Institute, Saudi Arabia is by far Britain’s most important arms customer, responsible for 49 percent of total weapons purchases, buoying the booming industry. In addition, the R.A.F. repairs and maintains Saudi warplanes involved in the destruction while storing and issuing bombs used against the Houthis. Labour leader Jeremy Corbyn had promised to end all arms sales to Saudi Arabia if elected. The U.K.’s own House of Lords ruled that the government was breaking the law by continuing to send arms to the region. But the Conservative December landslide ensured the policy remained intact, sending weapons manufacturers’ stocks soaring. British covert operations in the Syrian Civil War, Curtis argues, also violate numerous laws and put civilians at risk.

While illegally spying on its own citizens, collecting massive amounts of data on them, the British government has also arbitrarily detained and tortured those that risked their lives and liberties to expose the practice. Wikileaks co-founder Julian Assange, for example, remains incarcerated in Belmarsh Prison in London, only being moved out of solitary confinement after coordinated protests from the other high-security inmates. Nils Meltzer, the U.N. Special Rapporteur on torture, has demanded the government immediately release the Australian, blasting the government’s “indifference” to his abuse.

One little-known area that the U.K. is breaking international law is in the use of child soldiers. One in four army recruits are now children under the age of 18, with British teenagers being sent to the frontline in Iraq and Afghanistan. The U.N. Committee on the Rights of the Child has expressed concern over this recruitment policy multiple times.

While Britain, according to Curtis, qualifies for the term “rogue state,” Americans should perhaps not be so quick to judge, as former State Department official William Blum’s book Rogue State: A Guide to the World’s Only Superpower, catalogs how the U.S. government has attempted to overthrow over fifty foreign governments since 1945, concluding that the U.S. is the number one threat to the world.

Curtis has been a consistent critic of British government policy for many years, exposing Britain’s collusion with radical Islamic groups to overthrow secular Middle Eastern states. In his book Unpeople: Britain’s Secret Human Rights Abuses, he calculated that the U.K. was complicit in the deaths of around ten million people since 1945. Despite this, it is unlikely that the U.S. will be pronouncing its ally a rogue state any time soon, as the term seems to be reserved only for enemies of the empire.

Alan MacLeod is a Staff Writer for MintPress News. After completing his PhD in 2017 he published two books: Bad News From Venezuela: Twenty Years of Fake News and Misreporting and Propaganda in the Information Age: Still Manufacturing Consent. He has also contributed to Fairness and Accuracy in Reporting, The Guardian, Salon, The Grayzone, Jacobin Magazine, Common Dreams the American Herald Tribune and The Canary.