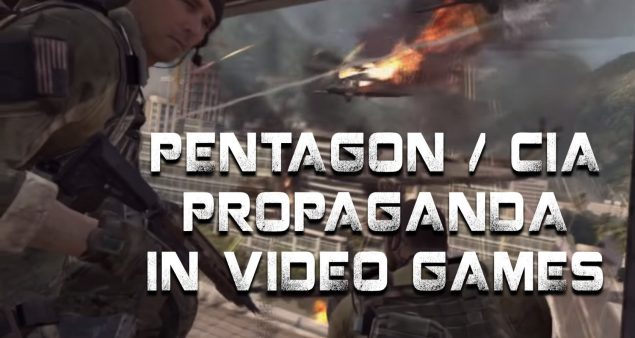 The US military and CIA launder coup propaganda through popular, violent, first-person shooter video games like Call of Duty, simulating assassinations of Venezeula’s socialist leader and sabotage of its electrical infrastructure but for Venezuelans, this is not a game.

By Max Blumenthal and Ben Norton

We often think of video games as fiction, but the US government has weaponized them to advance its agenda around the globe.

Nowhere is this more clear than in Venezuela, where the US military has laundered regime change propaganda through some of the world’s most popular first-person shooter games.

This March, amid a US-backed right-wing coup attempt overseen by the Donald Trump administration, Venezuela experienced a sudden collapse of its electrical infrastructure, plunging the country into darkness.

This has renewed focus on the role of video games in psychologically conditioning users to support the country’s destruction – and in foreshadowing specific events during the coup.

Venezuelan citizen journalists Orlenys Ortiz and Sancocho Power have drawn attention to the similarity between the plot of a 2013 first person shooter game, Call of Duty: Ghosts, and alleged acts of US sabotage against the country this March.

Call of Duty: Ghosts is set in a dystopian future after the Middle East is nuked. A Venezuelan general comes into power, establishing a socialist style federation that spreads across Latin America like a disease, uniting all oil producing nations and expelling US citizens.

You as the player are part of an elite force of US commandos that invades the country, murders the socialist leader, and destroys his federation.

The US Special Operations forces open their assault by launching a rocket at a dam that looks strikingly similar to Venezuela’s Guri dam, an act of deliberate terror that floods the streets of Caracas.

The city is recreated in vivid detail, down to the Chavista graffiti that colors city walls.

The mission ends with the execution-style killing of Venezuela’s leader, who is shot in the back in slow motion by America’s finest. In case you weren’t sure about his commitment to socialism, he’s wearing a red beret – just like Hugo Chavez.

During a follow-up mission, the player returns to Caracas, breaks into a power plant, and inserts a computer virus into the electricity grid, plunging the city into darkness.

Call of Duty: Ghosts is not the only game that gives gamers the opportunity to simulate the destruction of Venezuela.

In a more crudely designed 2008 first person shooter, Mercenaries 2: World in Flames, a populist billionaire named Ramon Solano takes over Venezuela in a coup and pledges to restore the country’s oil profits to its people.

Gamers get to play the part of Mattias Nilson, a Swedish sociopath who’s willing to kill anyone if the price is right. Under contract from a multi-national oil company, Nilson tears Venezuela apart and ultimately winds up blowing Solano’s brains out inside his palace – which looks suspiciously like the 4F compound where Hugo Chavez worked when he was president.

Like so many first person shooting games, The Call of Duty and Mercenaries 2 were developed with substantial input from America’s military-intelligence apparatus.

Back in 2003, at the dawn of the so-called war on terror, Pandemic Studios – the company behind Mercenaries 2 – was subcontracted as part of a “$45 million endeavor formed by the army five years earlier to connect academics with local entertainment and video game industries.”

A decade later, Call of Duty designer Dave Anthony was enlisted by a former Pentagon official named Stephen Grundman to advise The Art of Future War Project – an initiative of NATO’s unofficial think tank in Washington, the Atlantic Council.

The project also sought advice from Oliver North, the right-wing military fanatic who was convicted of a felony for his role in destabilizing Central America during the 1980’s.

In fact, North was credited as a military consultant for the 2012 Call of Duty: Black Ops, and made a cameo appearance in the game

Chillingly, one future war scenario envisioned by Anthony was “an assault on Las Vegas similar to the 2008 [terrorist] attacks on Mumbai.”

Makers of a Call of Duty sequel openly boasted of working with a Pentagon advisor.

Did the attack on Venezuela’s electricity grid and hydroelectric dam depicted in Call of Duty forecast another future assault? Venezuela’s government and millions of the country’s citizens certainly think so.

Here’s Marco Rubio on March 7, calling for “widespread unrest” across Venezuela just hours before the hydroelectric dam at Guri collapsed.

At 12:16 PM on March 7, @marcorubio called for “widespread unrest” to force regime change in Venezuela.

For Venezuelans, this is not a game.