How Israeli spy tech reaches deep into our lives 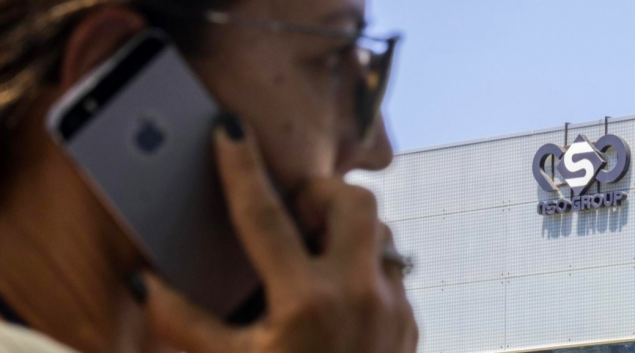 Digital age weapons developed by Israel to oppress Palestinians are rapidly being repurposed for much wider applications – against Western populations who have long taken their freedoms for granted.

Israel’s status as a “startup nation” was established decades ago. But its reputation for hi-tech innovation always depended on a dark side, one that is becoming ever harder to ignore.

They were the test bed for developing not only new conventional weapons systems, but also new tools for mass surveillance and control

A few years ago, Israeli analyst Jeff Halper warned that Israel had achieved a pivotal role globally in merging new digital technologies with the homeland security industry. The danger was that gradually we would all become Palestinians.

Israel, he noted, treated the millions of Palestinians under its unaccountable, military rule effectively as guinea pigs in open-air laboratories. They were the test bed for developing not only new conventional weapons systems, but also new tools for mass surveillance and control.

As a recent report in Haaretz observed, Israel’s surveillance operation against Palestinians is “among the largest of its kind in the world. It includes monitoring the media, social media and the population as a whole”.

But what began in the occupied territories was never going to stay in the West Bank, East Jerusalem and Gaza. There was simply too much money and influence to be gained from a trade in these new hybrid forms of offensive digital technology.

Tiny though it may be in size, Israel has long been a world leader in an extremely lucrative arms trade, selling to authoritarian regimes around the world its weapons systems as “battlefield-tested” on Palestinians.

This trade in military hardware is increasingly being overshadowed by a market for belligerent software: tools for waging cyber warfare. 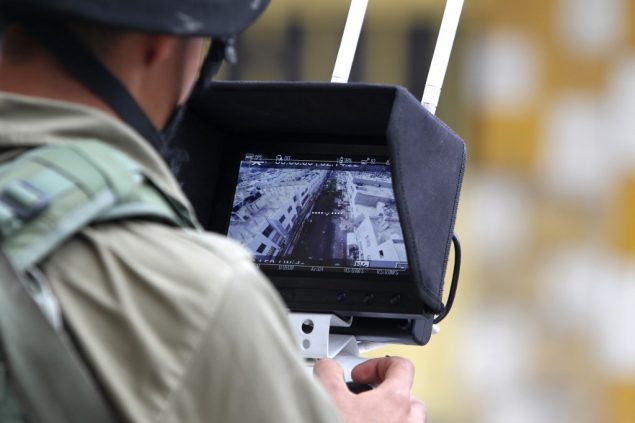 Such new-age weapons are in high demand from states for use not only against external enemies, but against internal dissent from citizens and human rights monitors.

Israel can rightly claim to be a world authority here, controlling and oppressing populations under its rule. But it has been keen to keep its fingerprints off much of this new Big Brother technology, by outsourcing the further development of these cyber tools to graduates of its infamous security and military intelligence units.

Nonetheless, Israel implicitly sanctions such activities by providing these firms with export licences – and the country’s most senior security officials are often closely involved in their work.

Once out of uniform, Israelis can cash in on years of experience gained from spying on Palestinians by setting up companies developing similar software for more general applications.

Apps using sophisticated surveillance technology originating in Israel are increasingly common in our digital lives. Some have been put to relatively benign use. Waze, which tracks traffic congestion, allows drivers to reach destinations faster, while Gett pairs customers up with nearby taxis through their phone.

But some of the more covert technology produced by Israeli developers sticks much closer to its original military format.

This offensive software is being sold both to nations wishing to spy on their own citizens or rival states, and to private corporations hoping to gain an edge on competitors or better commercially exploit and manipulate their customers.

Once incorporated into social media platforms with billions of users, such spyware offers state security agencies a potential near-global reach. That explains the sometimes fraught relationship between Israeli tech firms and Silicon Valley, as the latter struggles to take control of this malware – as two contrasting, recent examples highlight.

In a sign of the tensions, WhatsApp, a social media platform owned by Facebook, initiated the first lawsuit of its kind in a California court last week against NSO, Israel’s largest surveillance company.

WhatsApp accuses NSO of cyber attacks. In just a two-week period ending in early May examined by WhatsApp, NSO is reported to have targeted the mobile phones of more than 1,400 users in 20 countries.

NSO’s spyware, known as Pegasus, has been used against human rights activists, lawyers, religious leaders, journalists and aid workers. Reuters revealed last week that senior officials of US allies had also been targeted by NSO.

After taking charge of the user’s phone without their knowledge, Pegasus copies data and turns on the microphone for surveillance. Forbes magazine has described it as the “world’s most invasive mobile spy kit”.

NSO has licensed the software to dozens of governments, including prominent human rights-abusing regimes such as Saudi Arabia, Bahrain, the United Arab Emirates, Kazakhstan, Mexico and Morocco.

Amnesty International has complained that its staff are among those targeted by NSO spyware. It is currently supporting a legal action against the Israeli government for issuing the company with an export licence.

NSO was founded in 2010 by Omri Lavie and Shalev Hulio, both reported to be graduates of Israel’s vaunted military intelligence Unit 8200.

In 2014, whistleblowers revealed that the unit routinely spied on Palestinians, trawling through their phones and computers for evidence of sexual improprieties, health problems or financial difficulties that could be used to pressure them into collaborating with Israel’s military authorities. 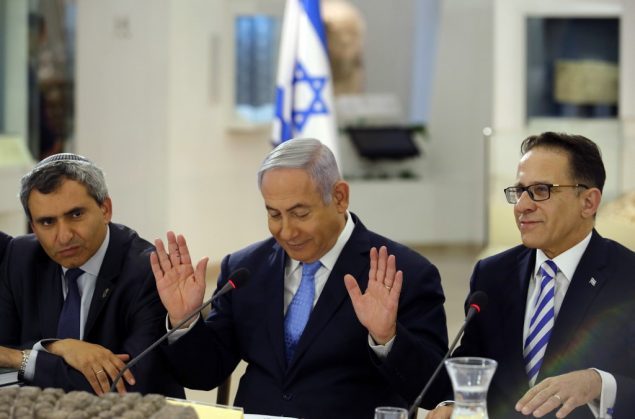 The soldiers wrote that Palestinians were “completely exposed to espionage and surveillance by Israeli intelligence. It is used for political persecution and to create divisions within Palestinian society by recruiting collaborators and driving parts of Palestinian society against itself.”

Despite officials issuing export licences to NSO, Israeli government minister Zeev Elkin denied “Israeli government involvement” in the hacking of WhatsApp last week. He told Israeli radio: “Everyone understands that this is not about the state of Israel.”

In the same week that WhatsApp launched its legal action, US television channel NBC revealed that Silicon Valley is nonetheless keen to reach out to Israeli startups deeply implicated in abuses associated with the occupation.

AnyVision’s main software, Better Tomorrow, has been nicknamed “Occupation Google” because the firm claims it can identify and track any Palestinian by searching footage from the Israeli army’s extensive network of surveillance cameras in the occupied territories.

Despite obvious ethical problems, Microsoft’s investment suggests it may be aiming to incorporate the software into its own programmes. That has caused grave concern among human rights groups.

Shankar Narayan of the American Civil Liberties Union warned of a future all too familiar to Palestinians living under Israeli rule: “The widespread use of face surveillance flips the premise of freedom on its head and you start becoming a society where everyone is tracked, no matter what they do, all the time”, Narayan told NBC.

“Face recognition is possibly the most perfect tool for complete government control in public spaces.”

According to Yael Berda, a researcher at Harvard University, Israel maintains a list of some 200,000 Palestinians in the West Bank it wants under surveillance around the clock. Technologies such as AnyVision’s are seen as vital to keeping this vast group under constant monitoring.

A former AnyVision employee told NBC that the Palestinians were treated as a testing ground. “The technology was field-tested in one of the world’s most demanding security environments and we were now rolling it out to the rest of the market,” he said.

The Israeli government itself has a growing interest in using these spying technologies in the US and Europe, as its occupation has become the focus of controversy and scrutiny in mainstream political discourse.

In the UK, the shift in the political climate has been highlighted by the election of Jeremy Corbyn, a long-time Palestinian rights activist, to head the opposition Labour Party. In the US, a small group of lawmakers visibly supportive of the Palestinian cause have recently entered Congress, including Rashida Tlaib, the first Palestinian-American woman to hold the post. 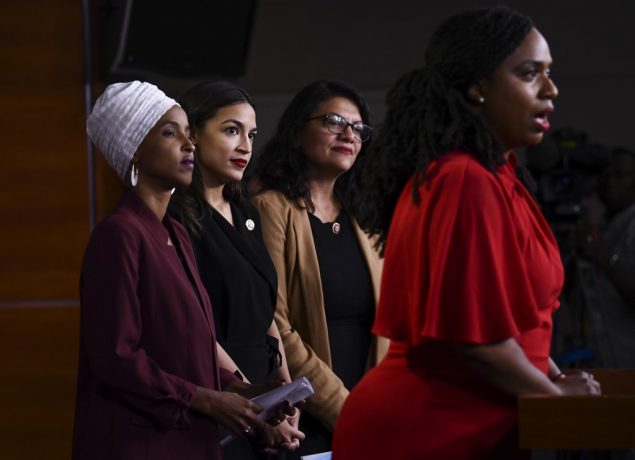 US Representatives Ayanna Pressley (D-MA) speaks as, Ilhan Abdullahi Omar (D-MN)(L), Rashida Tlaib (D-MI) (2R), and Alexandria Ocasio-Cortez (D-NY) hold a press conference, to address remarks made by US President Donald Trump earlier in the day, at the US Capitol in Washington, DC on July 15, 2019. – President Donald Trump stepped up his attacks on four progressive Democratic congresswomen, saying if they’re not happy in the United States “they can leave.” (Photo by Brendan Smialowski / AFP)

More generally, Israel fears the flourishing international solidarity movement BDS (boycott, divestment and sanctions), which calls for a boycott of Israel – modelled on the one against apartheid South Africa – until it stops oppressing Palestinians. The BDS movement has grown strongly on many US campuses.

As a result, Israeli cyber firms have been drawn ever more deeply into efforts to manipulate public discourse about Israel, apparently including by meddling in foreign elections.

Two notorious examples of such firms have briefly made headlines. Psy-Group, which marketed itself as a “private Mossad for hire”, was shut down last year after the FBI began investigating it for interfering in the 2016 US presidential election. Its “Project Butterfly”, according to the New Yorker, aimed to “destabilize and disrupt anti-Israel movements from within”.

Black Cube, meanwhile, was exposed last year to have been carrying out hostile surveillance of leading members of the previous US administration, under Barack Obama. It appears closely linked to Israel’s security services, and was a for a time located on an Israeli military base.

There are other Israeli firms seeking to blur the distinction between private and public space.

Onavo, an Israeli data collection company established by two veterans of Unit 8200, was acquired by Facebook in 2013. Apple banned its VPN app last year over revelations that it was providing unlimited access to users’ data.

Israel’s strategic affairs minister, Gilad Erdan, who heads a secretive campaign to demonise overseas BDS activists, had regular meetings with another firm, Concert, last year, according to a report in Haaretz. This covert group, which is exempt from Israel’s Freedom of Information laws, has received around $36m in funding from the Israeli government. Its directors and shareholders are a “who’s who” of Israel’s security and intelligence elite.

Another leading Israeli firm, Candiru, is named for a small Amazonian fish that is reputed to secretly invade the human body, where it becomes a parasite. Candiru sells its hacking tools mostly to Western governments, though its operations are shrouded in secrecy.

Its staff are drawn almost exclusively from Unit 8200. In a sign of how closely linked are the public and covert technologies Israeli firms have developed, Candiru’s chief executive, Eitan Achlow, previously headed Gett, the taxi service app.

Israel’s security elite is cashing in on this new market for cyber warfare, exploiting – just as it did with the trade in conventional arms – a ready made and captive Palestinian population, on which it can test its technology.

If this dystopian future continues to unfold, New York, London, Berlin and Paris will increasingly look like Nablus, Hebron, East Jerusalem and Gaza

It is no surprise that Israel is gradually normalising in Western countries invasive and oppressive technologies long familiar to Palestinians.

Facial recognition software allows for ever more sophisticated racial and political profiling. Covert data gathering and surveillance smashes the traditional boundaries between private and public space. And the resulting doxxing campaigns make it easy to intimidate, threaten and undermine those who dissent or, like the human rights community, try to hold the powerful to account.

If this dystopian future continues to unfold, New York, London, Berlin and Paris will increasingly look like Nablus, Hebron, East Jerusalem and Gaza. And we will all come to understand what it means to live inside a surveillance state engaged in cyber warfare against those it rules over.

Jonathan Cook, a British journalist based in Nazareth since 2001, is the the author of three books on the Israeli-Palestinian conflict. He is a past winner of the Martha Gellhorn Special Prize for Journalism. His website and blog can be found at: www.jonathan-cook.net
Editors’ Note: While we don’t necessarily share the views we publish on New Cold War, we do attempt to provide readers with a range of views. This is because your right to make your own mind up depends on your being fully informed.
Share
Tweet
Share
Pin