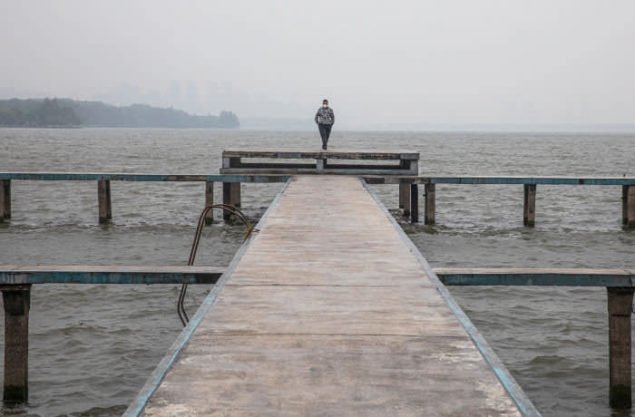 By Leslie Hook and Aleksandra Wisniewska

Near the top of the Mauna Loa volcano in Hawaii, 3,400m above sea level, a gleaming observatory surrounded by dark lava rocks measures carbon dioxide levels every second of every day.

It was here, using this data, that chemist Charles Keeling first demonstrated that the impact of fossil fuel use on atmospheric CO2 levels was measurable. The result of his research, known as the “Keeling curve”, shows how concentrations of carbon dioxide in the atmosphere have been ticking up ever since records began in 1958.

Today scientists analysing the Mauna Loa data are looking for something else: a change in atmospheric CO2 concentrations, due to the global economic slowdown caused by coronavirus.

“We have not had a sudden change in fossil fuel emissions ever before in the history of the curve,” says Ralph Keeling, a professor at the Scripps Institute who leads the atmospheric analysis programme founded by his father. If his team is able to detect a change in atmospheric CO2 concentrations, he adds, it would be the first time that an economic crisis has ever showed up in the data.

For now the CO2 concentrations measured at Mauna Loa are still rising, and are on track to reach a new global record in May, typically the peak month. But Prof Keeling says a 10 per cent drop in fossil fuel emissions over a period of one year — a scenario that is not impossible during the coronavirus shutdown — would show up in atmospheric CO2 concentrations and be measurable at Mauna Loa.

All over the world, pollution levels are dropping fast. The lockdowns triggered by the pandemic, with about 2.6bn people living under restrictions, are starting to have an impact not only on the virus but also on the planet — even if the effect is only temporary and comes at a huge social and human cost.

As airlines ground their fleets, car travel grinds to a halt and industries shut down, emissions from transportation and power have plummeted. In the US, emissions of carbon dioxide are forecast to drop 7.5 per cent this year, according to a recent government estimate. In the EU, daily emissions have fallen 58 per cent compared to pre-crisis levels, according to the French consultancy Sia Partners.

Global levels of nitrogen dioxide, a pollutant linked to cars, have hit a record low, according to the Centre for Research on Energy and Clean Air. Less coal burning in China in February alone has already avoided the equivalent of the annual emissions of a small European country. And the air quality in major cities from New Delhi to Beijing and Los Angeles is cleaner than at any time in recent memory. 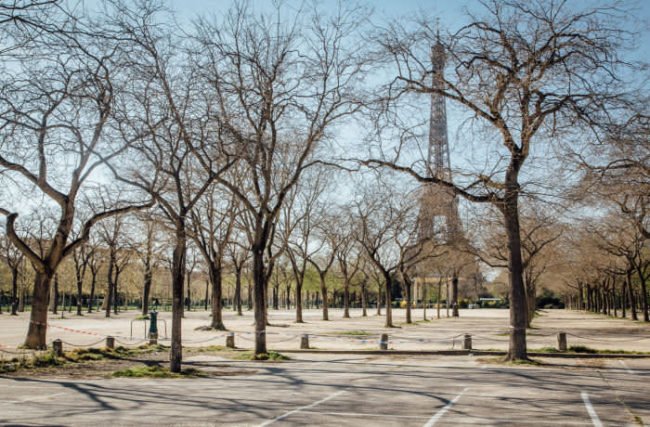 “It is a big, natural experiment that you could never reproduce on this scale,” says James Lee, a professor of atmospheric chemistry at the University of York. “We will be able to get a much better handle on where the pollution is coming from in normal circumstances, because things like power generation will continue, but road traffic is shutting down.”

Yet despite the potential short-term dip in emissions, there is a risk that the pandemic — which is likely to dominate debate for months or even years to come — will overshadow environmental concerns. Climate talks have already been delayed and new policy initiatives postponed. The convention centre that was set to host the UN climate talks in Glasgow in November has been converted into a hospital for coronavirus patients. Governments and world leaders have attention for only one crisis right now.

“It’s going to put a pause on anything climate related,” says Glen Peters, research director at the Center for International Climate Research in Oslo. “In the policy discussions for the next 6-12 months, climate is probably not going to be mentioned, it is going to be about coronavirus and economic recovery.” 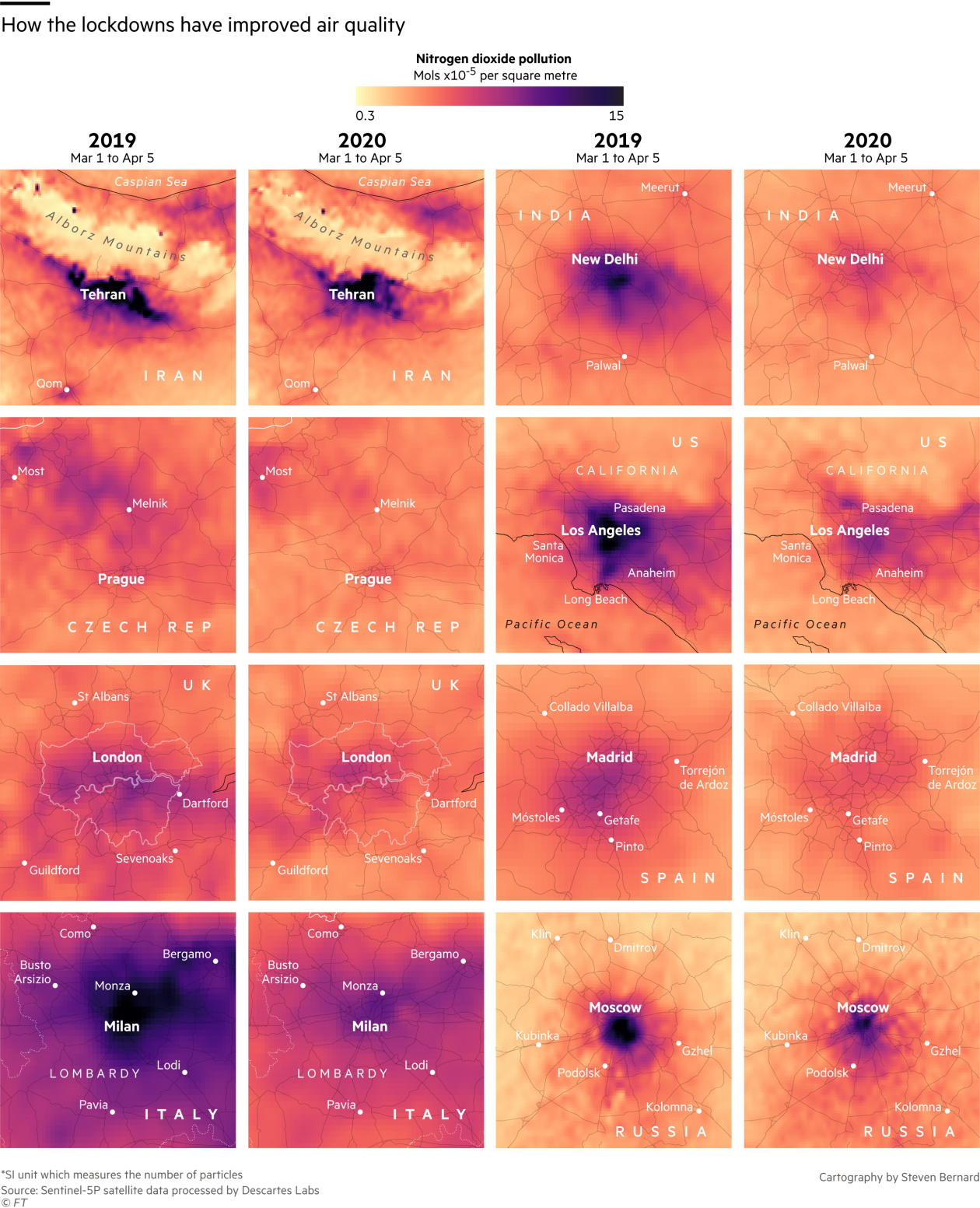 Some of the immediate changes are visible in daily life. In Venice, the waters of the canals are running clear, because boats are no longer churning up the mud. In the centre of London, the sound of birdsong is audible, because traffic noise has all but stopped.

But environmental advocates say it is too early to celebrate, and point out that any benefits are likely to be shortlived. “Closing down our entire economies for a period of weeks or months is not going to get us toward decarbonising,” says Peter Betts, previously the UK’s lead climate negotiator, now an associate fellow at Chatham House. “There may be some positive behavioural impact. But the real question is what happens in the recovery phase. Do we just go back to business as usual?”

Climate scientists are racing to understand what the drop in emissions could mean for global warming. Prof Keeling and his colleagues are trying to determine whether the economic impact of coronavirus will reduce atmospheric concentrations of CO2. “The lesson is that you can change emissions with this kind of shock”, he says, “but we’d like to learn how to change emissions without a shock like this.”

Any long-term change in atmospheric concentrations of CO2 — that would be enough to show up in Mauna Loa — is likely to be very small. But the fall in emissions is real. 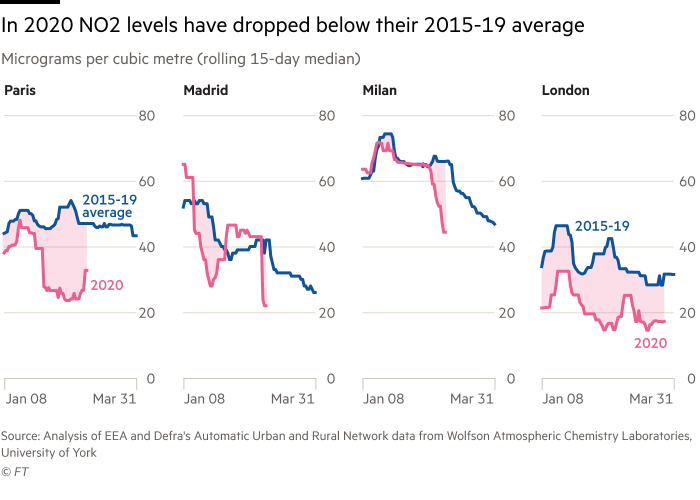 An FT analysis, using data from Flightradar24, of air travel found that in March, airline CO2 emissions dropped 31 per cent — about 28m tonnes of carbon dioxide — the equivalent of taking at least 6m cars off the road for a year.

That drop is set to become even steeper. Global air traffic was 65 per cent below pre-crisis levels in early April, according to OAG, a travel data consultancy. In global hubs such as the UK, Hong Kong or Switzerland, air traffic has dropped more than 90 per cent from last year.

Petrol sales in the US have fallen 48 per cent year-on-year, to their lowest levels for at least three decades. Global oil demand has fallen by at least 20m barrels per day, according to IHS Markit, or about one-fifth of typical consumption.

Lauri Myllyvirta, lead analyst at the Centre for Research on Energy and Clean Air, says the impact will be significant — oil typically accounts for about 40 per cent of global CO2 emissions. 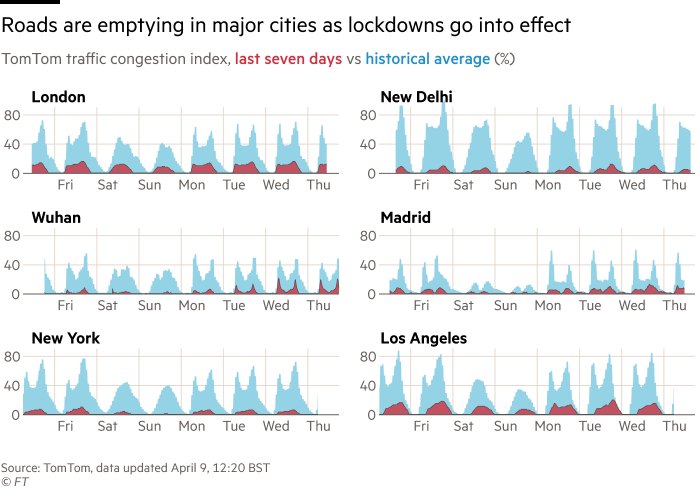 “We will certainly get a big short-term hit to emissions, and that is probably enough to ensure they go down in 2020,” says Mr Peters. “At the moment it is a little hard to see a path out of this pandemic. If so that will mean emissions are suppressed for some time.”

Any respite is likely to be outweighed by the pause in climate-related policies. Coronavirus arrived just as the climate movement appeared to be gathering momentum. In 2019 both the UK and France agreed to net zero emissions targets, Greta Thunberg became a household name, and central bankers began to talk about “climate stress tests” and “green quantitative easing”.

Nowhere was this shift more visible than in Europe, where the new president of the European Commission, Ursula von der Leyen, listed a green deal and a goal for Europe to be carbon neutral by 2050 as her top priorities.

But in a world shaped by pandemic, climate change now appears a more distant threat. The coronavirus outbreak has delayed most of the big climate events and policy announcements expected this year. Ms Von der Leyen’s proposal for a new Climate Law, which would commit Europe to net zero emissions by 2050, has been bogged down in a parliament that is now meeting virtually, and seems likely to be delayed. 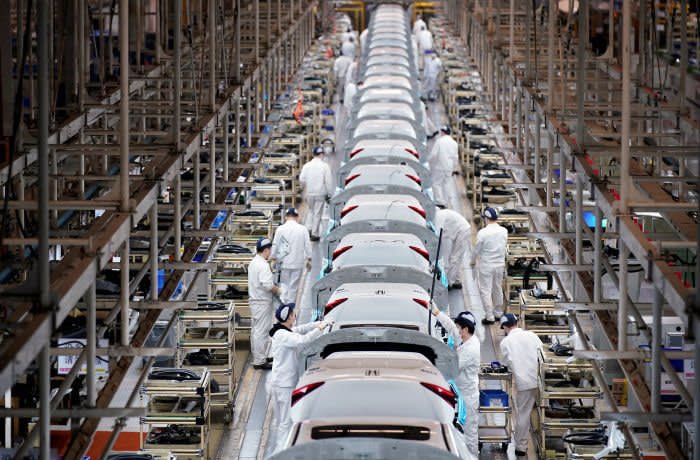 A production line inside a Honda factory in Wuhan, where the coronavirus outbreak began, after lockdown restrictions were eased © Aly Song/Reuters

Even the task of adjusting the EU’s climate target for 2030, previously considered a much simpler exercise, looks at risk. The EU is assessing whether it could adopt a tougher goal, of a 50 or 55 per cent reduction in greenhouse gas emissions by 2030 — upping the existing 40 per cent target. But what would normally be a simple bureaucratic calculation has turned into a quagmire, because the disruption is so great that economic modellers in Brussels can no longer make confident projections.

Adding to that sense of lost urgency the UN talks — when countries were due to commit to new climate targets — have been postponed.

The slowdown does mean, however, that some of the countries that have done least to curb their emissions, such as the US and Australia, may now hit their climate goals. “The US was running off track for its 2025 target,” says Mr Peters. “But if emissions drop 5 or 10 per cent then it is going to catch up with everything it missed.” 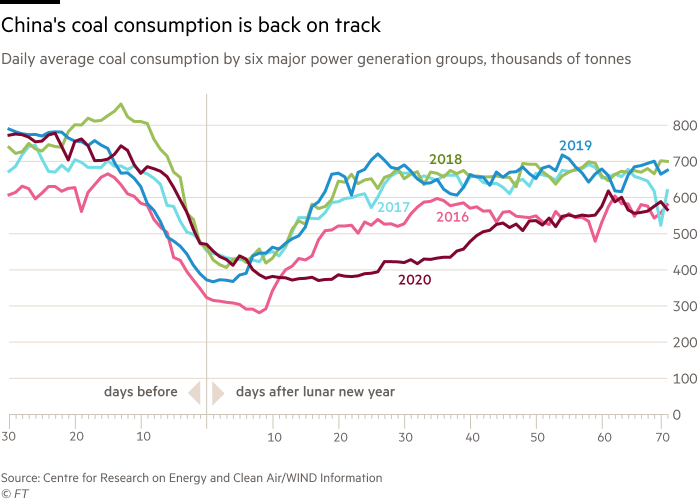 Ultimately the full impact of the virus on climate change will be determined by the shape of the stimulus measures adopted in a post-pandemic world. In the aftermath of the 2008-09 financial crisis, the energy intensive stimulus measures that followed, particularly in China, boosted emissions.

Since then the prevailing wisdom has been that environmental concerns go out the window in the face of a huge economic shock. “There is a scenario where there is a dash for growth,” says Mr Betts. “Will China build new power plants? Will Trump roll back environmental standards? That debate needs to start.”

Initial signs from Beijing suggest it is ramping up heavy industry as it eases the coronavirus lockdown. The number of coal-fired power plants it approved in the first three weeks of March was more than the number approved during the whole of 2019, according to data from Global Energy Monitor.

In Europe and the US, there is a better chance that the stimulus could eventually help the low carbon transition. Washington is debating whether to include clean energy in future stimulus measures, although support for renewables was omitted from the initial $2.2tn package agreed in March.

“We are now going to go into deep recession, possible depression, and we have to find a way for the digging out from that to be greener and more equitable,” says Rachel Kyte, Dean of the Fletcher School at Tufts University, previously the UN’s top clean energy official. “We desperately need jobs, economic activity, and by the way we need clean energy, so let’s go for it.” 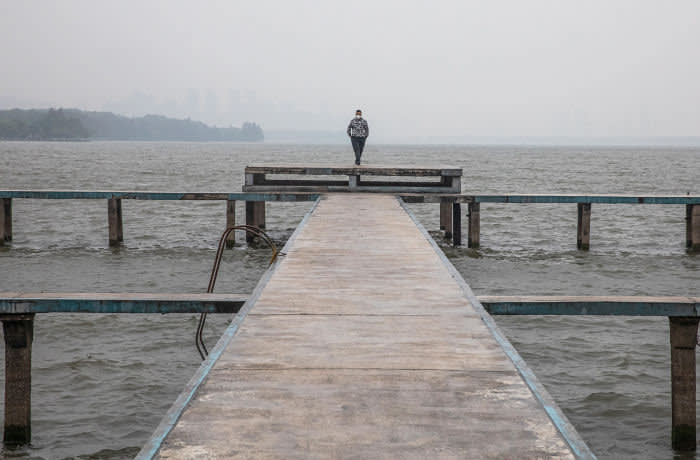 A visitor wearing a face mask at East Lake in Wuhan after the lockdown was lifted, allowing people to leave the city after more than two months © Roman Pilipey/EPA-EFE/Shutterstock

But others ask whether governments, after spending such extravagant sums — more than $3tn has been committed to reviving the world’s economies — will be able to fund low-carbon investments.

“What we have seen from all of this, is that we can make changes,” says Nicholas Stern, chair of the Grantham Research Institute on Climate Change and the Environment. “We have to recognise there will be other pandemics and be better prepared. [But] we must also recognise that climate change is a deeper and bigger threat that doesn’t go away, and is just as urgent.”

He points out that values are starting to shift, as societies accept unprecedented measures such as lockdowns and social distancing. And adds that some behavioural changes could last long after coronavirus. “People have to understand that the consequences of their actions can be collective and can be big,” he says. “In a sense that is the same story in climate change.”