Diplomatic initiative intended to stave off impending Ukraine collapse seems to have the tacit support of Obama administration but obstacles to peace remain immense. 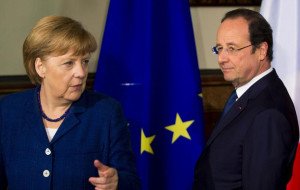 News that President Francois Hollande and Chancelor Merkel are travelling to Moscow confirms what previous reports suggested  — that a major diplomatic initiative to end the Ukrainian conflict is underway.

What has triggered this initiative is increasing evidence Ukraine is approaching the point of no return. Ukraine’s economic situation is in freefall. The dwindling level of the Central Bank’s foreign currency reserves has forced Ukraine to float its currency, the hryvnia, which in consequence lost almost a third of its value in the space of a single day.

The collapse of the hryvnia presents far greater problems to Ukraine than the devaluation of the rouble does to Russia. Unlike Russia, Ukraine has practically run through its foreign currency reserves, which have fallen to the level where they can cover the cost of just a few weeks’ imports. Unlike Russia, Ukraine is heavily in debt and lacks money to pay its debts or support its banks. The collapse of the hryvnia is going to make payment of these debts almost impossible.

Since the IMF is now threatening to cut off funding and since alternative sources of funding from the Western states have failed to materialise, the prospect of default and of the collapse of the currency and of the banking system is becoming very real. To the extent that the Ukrainian economy functions at all, it does so because of gas, coal and electricity supplied by Russia.

As the economy disintegrates the military situation approaches crisis. Brave talk of just a few weeks ago about how the Ukrainian military had supposedly fully recovered from the disaster of the summer has proved to be untrue. Donetsk airport has been lost with heavy losses. Latest reports say the Debaltsevo pocket is now sealed with thousands of troops cut off.

Meanwhile, the attempt to reverse the increasingly disastrous military situation through a further call-up of reservists has only triggered protest and opposition with reports of men fleeing abroad to Romania, Poland and especially Russia to escape the draft.

In the face of what increasingly looks like an impending collapse, that some Western politicians who have invested heavily politically in Ukraine are now searching for a wait out is unsurprising. Since the attempt to bully Russia through sanctions to pull the plug on the rebels has failed, this leaves them with no realistic alternative other than to talk to Russia. That is why Merkel and Hollande are going there.

Hollande has previously passed through Moscow on his way back from a summit in Kazakhstan. By doing so, Hollande broke an informal pact amongst Western leaders that they would not visit Moscow whilst the Ukrainian conflict remained underway. He received some criticism for doing it. That Merkel has jettisoned this pact shows how desperate the situation has become.

These reports have appalled Europe. All major European governments (Britain, France and Germany as well as Hungary, Finland and the Czech Republic) have publicly opposed the idea of sending arms to Ukraine, which would be a dangerous escalation and which could not reverse the course of the war.

No doubt there are some people within the U.S. government who remain strongly committed to the Ukrainian adventure and are pressing for weapons to be supplied to Ukraine. That view is also widely held in Congress. However, as we have discussed (here and here), there is growing evidence other U.S. officials are becoming increasingly worried the U.S. has dug itself into a hole. For the moment, it is these officials who seem to have the upper-hand.

If so, then the reports about discussions of weapons supplies, whilst undoubtedly reflecting an ongoing debate within the U.S. government, could also be intended to give the U.S. some diplomatic leverage over Moscow in a situation where it increasingly looks like having none.

What suggests that this may be the actual position is that Secretary of State Kerry during his visit to Kiev said nothing about arms supplies.  Instead, he came up with only paltry sums of financial aid (and those hedged around with conditions), gave some vapid words of support, and pointedly reminded Poroshenko of his commitment in the Minsk Protocol to grant special status to the rebel regions of the Donbass.

This suggests Merkel and Hollande have coordinated their position with the U.S. and the peace initiative has, at least for the moment, U.S. support, even if for domestic political reasons the Obama administration prefers to take a back seat.

I have to say that despite a French report that Washington was not consulted about Merkel’s and Hollande’s decision to go to Moscow, I personally think it is unlikely Merkel and Hollande would go to Moscow to pursue a peace initiative if they knew the U.S. opposed it. However, even if Western leaders are now genuinely seeking peace, that does not mean peace will come.  That depends on two factors: 1. the terms that are being proposed, and 2. if the terms are agreed, the degree to which the West is willing to force the Ukrainians to accept them.

We do not know what terms Merkel and Hollande are taking with them to Moscow. However what information we have is not encouraging. It seems their objective is not so much to secure a lasting settlement of the Ukrainian  conflict but rather to “freeze” the conflict so that they can save their Ukrainian protege from disaster.

Apparently, they are trying to do this by seeking to revive the stalled Minsk process and by talking up the federalisation idea the Russians proposed last spring. Hollande has also suggested that they are prepared to give some sort of pledge Ukraine will not join NATO.

It remains to be seen whether for the Russians or the rebels this is anywhere near enough. First, there must be a big question mark about whether the rebels or the people of the Donbass would be willing to accept even the loosest confederal structure with Kiev after all that has happened, except possibly as a stepping stone to outright independence. If so, then the rebels may not be willing to accept the form of federalisation Merkel and Hollande have in mind.

This question can perhaps be put off until constitutional negotiations begin. The far more pressing problem of agreeing an enforceable ceasefire along a mutually agreed boundary line cannot be. Here the problems are legion.

Reports suggest Merkel and Hollande want to return to the boundary line agreed by the rebels and the Ukrainian government in Minsk on 19th September 2014. The rebels have already ruled that out. They insist that all the territory they captured over the course of their current offensive should be retained by them. For the moment, the Russians are backing them.

Some rebels go further saying that as a minimum the boundary line should be the administrative borders of the Donetsk and Lugansk regions. This would mean towns like Slavyansk, Kramatorsk and Mariupol should be returned to their control. Some rebels want to go further still. A map is circulating that sets the boundary along the borders of the 1918 Donetsk-Krivoy Rog republic, which extended beyond Kherson far to the west. [See map insert, or see it on Wikipedia (in Spanish).] 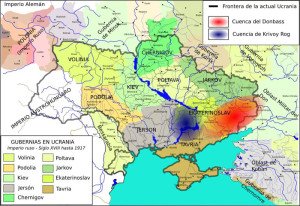 Map of Ukraine in 1917 with today`s borders overlaid

If reaching even a preliminary agreement to end the fighting faces immense difficulties, enforcing that agreement is going to present many more. The Russians have in the past shown they are prepared to pressure the rebels to compromise and abide by agreements they make. The single biggest obstacle to peace in Ukraine is that from the start of the Maidan crisis in November 2013, the Western powers have invariably failed to impose like pressure on their Maidan proteges even when they have promised to do so. The result is that agreements have repeatedly fallen by the wayside as the Maidan movement ignores them. The pattern was already set before the coup and it has continued ever since.

Given the consistent Western failure to force Kiev to abide by its commitments, it is difficult to believe the Russians any longer believe in Western promises or Western guarantees to do this in the future. If so, then it is difficult to see how any lasting agreements can be reached. Whether Western leaders want to face the fact or not, their past behaviour means there is now a critical shortage of trust and the fault for that does not lie in Moscow.

The fact that Merkel and Hollande are flying to Moscow is a sign of how critical Ukraine’s situation has become. It is not a sign this conflict is coming to an end.