Hiroshima Unlearned: Time to Tell the Truth About US Relations with Russia and Finally Ban the Bomb 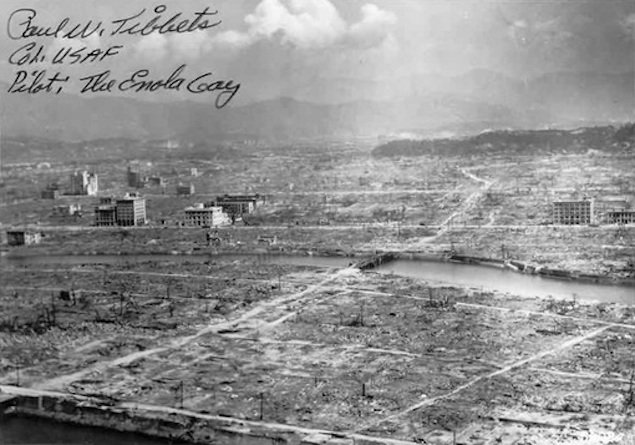 August 6 and 9 marked 74 years since the atomic bombing of Hiroshima and Nagasaki, where only one nuclear bomb dropped on each city caused the deaths of up to 146,000 people in Hiroshima and 80,000 people in Nagasaki. Now, with the US decision to walk away from the 1987 Intermediate-Range Nuclear Force (INF) negotiated with the Soviet Union, we are once again staring into the abyss of one of the most perilous nuclear challenges since the height of the Cold War.

August 6th and 9th mark 74 years since the atomic bombing of Hiroshima and Nagasaki, where only one nuclear bomb dropped on each city caused the deaths of up to 146,000 people in Hiroshima and 80,000 people in Nagasaki. Now, with the US decision to walk away from the 1987 Intermediate-Range Nuclear Force (INF) negotiated with the Soviet Union, we are once again staring into the abyss of one of the most perilous nuclear challenges since the height of the Cold War.

With its careful verification and inspections, the INF Treaty eliminated a whole class of missiles that threatened peace and stability in Europe. Now the US is leaving the treaty on the grounds that Moscow is developing and deploying a missile with a range prohibited by the treaty. Russia denies the charges and accuses the US of violating the treaty.  The US rejected repeated Russian requests to work out the differences in order to preserve the Treaty.

The US withdrawal should be seen in the context of the historical provocations visited upon the Soviet Union and now Russia by the United States and the nations under the US nuclear “umbrella” in NATO and the Pacific. The US has been driving the nuclear arms race with Russia from the dawn of the nuclear age:

— In 1946 Truman rejected  Stalin’s offer to turn the bomb over to the newly formed UN under international supervision, after which the Russians made their own bomb;

–Reagan rejected Gorbachev’s offer to give up Star Wars as a condition for both countries to eliminate all their nuclear weapons when the wall came down and Gorbachev released all of Eastern Europe from Soviet occupation, miraculously, without a shot;

— The US pushed NATO right up to Russia’s borders, despite promises when the wall fell that NATO would not expand it one inch eastward of a unified Germany;

–Clinton bombed Kosovo, bypassing Russia’s veto in the UN Security Council and violating the UN treaty we signed never to commit a war of aggression against another nation unless under imminent threat of attack;

–Clinton refused Putin’s offer to each cut our massive nuclear arsenals to 1000 bombs each and call all the others to the table to negotiate for their elimination, provided we stopped developing missile sites in Romania;

–Bush walked out of the 1972 Anti-Ballistic Missile Treaty and put the new missile base in Romania with another to open shortly under Trump in Poland, right in Russia’s backyard;

–Bush and Obama blocked any discussion in 2008 and 2014 on Russian and Chinese proposals for a space weapons ban in the consensus-bound Committee for Disarmament in Geneva;

–Trump now walked out of the INF Treaty;

–From Clinton through Trump, the US never ratified the 1992 Comprehensive Test Ban Treaty as Russia has, and has performed more than 20 underground sub-critical tests on the Western Shoshone’s sanctified land at the Nevada test site.  Since plutonium is blown up with chemicals that don’t cause a chain reaction, the US claims these tests don’t violate the treaty;

–Obama, and now Trump, pledged over one trillion dollars for the next 30 years for two new nuclear bomb factories in Oak Ridge and Kansas City, as well as new submarines, missiles, airplanes, and warheads!

What has Russia had to say about these US affronts to international security and negotiated treaties? Putin at his State of the Nation address in March 2018 said:

I will speak about the newest systems of Russian strategic weapons that we are creating in response to the unilateral withdrawal of the United States of America from the Anti-Ballistic Missile Treaty and  the practical deployment of their missile defence systems both in the US and beyond their national borders.

I would like to make a short journey into the recent past. Back in 2000, the US announced its withdrawal from the Anti-Ballistic Missile Treaty. Russia was categorically against this. We saw the Soviet-US ABM Treaty signed in 1972 as the cornerstone of the international security system. Under this treaty, the parties had the right to deploy ballistic missile defence systems only in one of its regions. Russia deployed these systems around Moscow, and the US around its Grand Forks land-based ICBM base. Together with the Strategic Arms Reduction Treaty, the ABM treaty not only created an atmosphere of trust but also prevented either party from recklessly using nuclear weapons, which would have endangered humankind, because the limited number of ballistic missile defence systems made the potential aggressor vulnerable to a response strike.

We did our best to dissuade the Americans from withdrawing from the treaty.

All in vain. The US pulled out of the treaty in 2002. Even after that we tried to develop constructive dialogue with the Americans. We proposed working together in this area to ease concerns and maintain the atmosphere of trust. At one point, I thought that a compromise was possible, but this was not to be. All our proposals, absolutely all of them, were rejected. And then we said that we would have to improve our modern strike systems to protect our security.

Despite promises made in the 1970 Non-Proliferation Treaty (NPT) that the five nuclear weapons states–US, UK, Russia, France, China–would eliminate their nuclear weapons while all the other nations of the world promised not to get them (except for India, Pakistan, and Israel, which also acquired nuclear weapons), there are still nearly 14,000 nuclear bombs on the planet. All but 1,000 of them are in the US and Russia, while the seven other countries, including North Korea, have about 1000 bombs between them.  If the US and Russia can’t settle their differences and honor their promise in the NPT to eliminate their nuclear weapons, the whole world will continue to live under what President Kennedy described as a nuclear Sword of Damocles, threatened with unimaginable catastrophic humanitarian suffering and destruction.

To prevent a nuclear catastrophe, in 2017, 122 nations adopted a new Treaty for the Prohibition of Nuclear Weapons (TPNW). It calls for a ban on nuclear weapons just as the world had banned chemical and biological weapons.  The ban treaty provides a pathway for nuclear weapons states to join and dismantle their arsenals under strict and effective verification. The International Campaign to Abolish Nuclear Weapons, which received the Nobel Peace Prize for its efforts, is working for the treaty to enter into force by enrolling 50 nations to ratify the treaty.  As of today, 70 nations have signed the treaty and 24 have ratified it, although none of them are nuclear weapons states or the US alliance states under the nuclear umbrella.

With this new opportunity to finally ban the bomb and end the nuclear terror,  let us tell the truth about what happened between the US and Russia that brought us to this perilous moment and put the responsibility where it belongs to open up a path for true peace and reconciliation so that never again will anyone on our  planet ever be threatened with the terrible consequences of nuclear war.

Here are some actions you can take to ban the bomb:

+ Ask your member of Congress to sign the ICAN Parliamentary Pledge

+ Support the Code Pink Divest From the War Machine Campaign

+ Distribute Warheads To Windmills, How to Pay for the Green New Deal, a new study addressing the need to prevent the two greatest dangers facing our planet: nuclear annihilation and climate destruction.

+ Sign the World Beyond War pledge and add your name to this critical new campaign to make the end of war on our planet an idea whose time has come! www.worldbeyondwar.org

Alice Slater is a founder of Abolition 2000, which works for a treaty to ban nuclear weapons.