A hearing took place at the European Parliament on January 26 on the case of imprisoned Ukrainian journalist Ruslan Kotsaba. The event was sponsored by Member of the European Parliament  Tatjane Ddanoka from Latvia. Speakers were Tatiana Montyan, Kotsaba’s Ukrainian legal defender, Denis Krivosheev, Regional Deputy Director of Amnesty International, and Adrien Collin, program officer at the International Federation of Journalists. You can view a two-minute video clip of the hearing here. 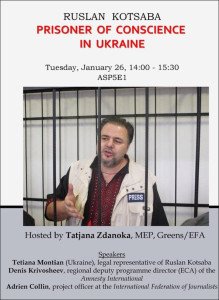 Ruslan Kotsaba was arrested on February 7, 2015 and charged with treason after posting a video addressed to Ukrainian President Petro Poroshenko in which he criticized compulsory military conscription in Ukraine and called on his fellow citizens to boycott it. He opposes the war being waged by Ukraine agains thte people of the Donbass region in the east of the country.

Amnesty international has declared Kotsaba a “prisoner of conscience”.

In December 2015, 34 members of the European Parliament signed a letter condemning the arrest of Ruslan Kotsaba for “simply for doing his work” and calling for his immediate release. Below is the full text.

Detention of journalist Ruslan Kotsaba, charged with “treason”, extended for another 60 days, June 4, 2015

We, Members of the European Parliament, are calling for the immediate and unconditional release of Ruslan KOTSABA, a journalist jailed in  Ukraine  since February 7, 2015, simply for doing his  work. Two days after his arrest,  Amnesty  International  stated  that  it considers  Kotsaba to be a prisoner of conscience. Ruslan Kotsaba is prosecuted for “betrayal of the motherland” according to article 111, part 1 of the Ukrainian Criminal Code. The court has regularly  prolonged  his pre-trial detention. 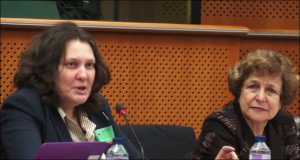 Ukraine, as an upcoming candidate country to join the European Union, is obliged to respect the right to freedom of expression as set out in the EU Charter of Fundamental Rights. This right shall include freedom to hold opinions  and  to  receive  and  impart information and ideas without interference by public authority and regardless of  frontiers.

Members  of the European  Parliament: