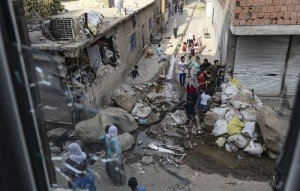 HDP (Peoples’ Democratic Party) Şırnak MP Faysal Sarıyıldız has reported on his Twitter account about the latest situation in Cizre and Silopi districts. Sarıyıldız pointed out that in the past 48 hours, attacks of the Turkish state security forces have intensified in both districts where neighborhoods inhabited by thousands of people are under heavy artillery shelling. He stated that announcements are continuously made from armored vehicles, ordering people to leave their homes or die in Cizre and Silopi.

Noting that the most recent curfew declared on December 14 in Silopi is on its 21st day, Sarıyıldız said the death toll is 19 people who all have been killed in the past 3 weeks.

The HDP MP continued; “Inhabitants of Cizre and Silopi have been deprived of food, drinking water, electricity, medical services, education, communication and all basic necessities. Under heavy shelling targeting their houses, people are forced to mass displacement in both towns of Şırnak, and those refusing to leave their homes and town are facing a large scale massacre.”

HDP MP for Şırnak appealed to the international community to break the silence and show solidarity with the people of Cizre and Silopi to prevent an imminent massacre.

ANKARA–With its harsh security policies and curfews, the Turkish government is applying the “Sri Lanka model” in its fight against the terrorist Kurdistan Workers’ Party (PKK) in the southeastern provinces of Turkey, main opposition Republican People’s Party (CHP) Deputy Chairman Sezgin Tanrıkulu said at a press conference in Parliament on Monday.

Speaking to reporters at the conference, Tanrıkulu noted that there have been more than 300 days of curfews in 17 districts of different provinces in the Southeast, where people are prevented from leaving their homes even to fulfil their basic needs. “It is the same policy as Sri Lanka’s in 2006,” he said.

The Sri Lankan military defeated the Liberation Tigers of Tamil Eelam (LTTE, also known as the Tamil Tigers) in May 2009, following four bloody wars with the LTTE, who had fought to create an independent Tamil state called Tamil Eelam in north and east Sri Lanka. More than 4,000 people, including security forces, LTTE members and civilians, were killed during conflicts in 2006.

Underlining that the European Court of Human Rights (ECtHR) asked Turkey to submit a defense statement for the ongoing curfews in southeastern towns on Jan. 1, Tanrıkulu said that Turkey will face huge fines from the ECtHR if it fails to explain and lift the curfews.

“As has happened in Turkey, the Sri Lankan government rejected negotiations [with the LTTE] in 2006. The newly elected president [Rajapaksa of Sri Lanka] wiped out all the gains made during the peace process [with the LTTE] and took his country into civil war. All Tamilans were declared enemies like the Kurds in today’s Turkey. The government enforces criminal law, which is supposed to be imposed on our enemies, on [Kurdish] people in Sur, Silopi and Cizre,” Tanrıkulu added.