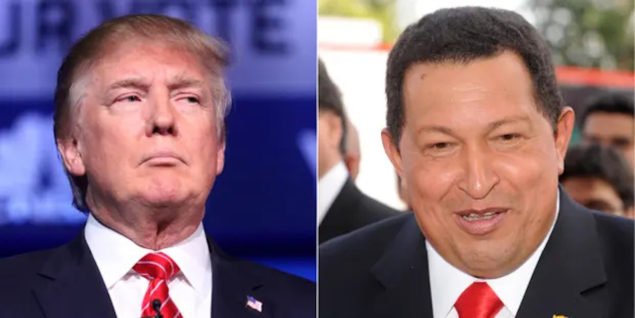 Several MSM journalists are clearly reasoning what better time to vilify the popular former leader of Venezuela, a country under deadly US siege, than during a deadly pandemic? 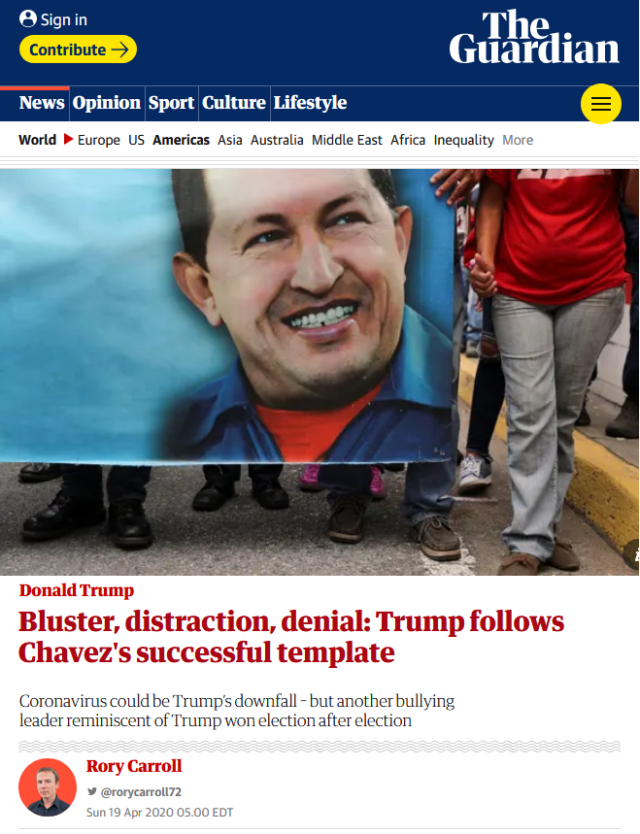 The Guardian‘s Rory Carroll (4/19/20) presented Donald Trump and Hugo Chávez as brothers under the skin: ” as media-savvy populists they worked the same pitch: the avenging outsider out to overturn a rotten system and make their nation great again.”

What better time to vilify the popular former leader of a country under deadly US siege than a deadly pandemic?

The demonization of Chávez and Chavismo on the basis of a false equation of left and right has been instrumental in discrediting other leftist figures and their movements, including former British Labour Party leader Jeremy Corbyn (New York Times, 1/25/19; Daily Telegraph, 2/4/19; Express, 11/26/19), US Senator Bernie Sanders (Wall Street Journal, 3/20/19) and Mexican President Andrés Manuel López Obrador (FAIR.org, 7/11/18). 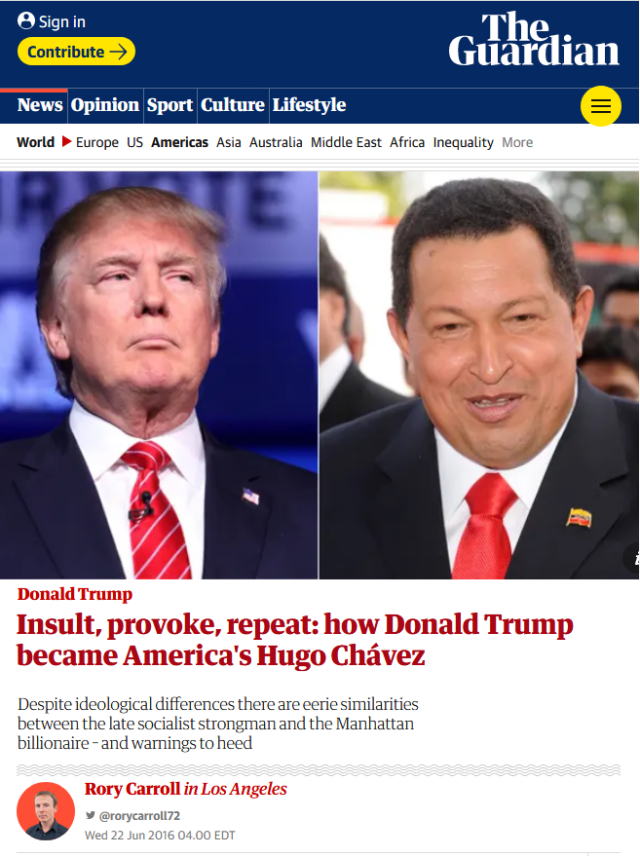 Carroll’s recent column is largely a remix of one he wrote in 2016 (Guardian, 6/22/16), which argued that “in the extemporized mix of bombast, menace and bawdy humor, the symbiotic relationship with crowds, the articulation of long-repressed grievances, Trump echoes the comandante.”

Carroll’s latest is a condensed rehashing of a longer 2016 article with the same thesis (Guardian, 6/22/16).

“Despite ideological differences, there are eerie similarities between the late socialist strongman and the Manhattan billionaire—and warnings to heed,” he wrote at the time, laboring to give his simplistic see-saw analysis an aura of sophistication.

The article was one of many “think” pieces hawking cheap comparisons between Trump, Chávez and other Latin American leftists.

Politico (3/24/16) placed Chávez in the same trinity as Trump and Pinochet, while the Wall Street Journal (3/6/16) included him among the US real-estate mogul’s “Latin role models.”

Corporate outlets typically prefaced their vulgar analogies with a token reference to the two leader’s stark “ideological differences,” though they largely ignored or downplayed the obvious Manichean gulf separating the very personification of US racialized capitalism from an Afro-Indigenous revolutionary.

“Beyond their ideological differences…Mr. Chávez’s and Mr. Trump’s speeches raise the possibility that violence may be the best solution,” the New York Times (9/20/16) quipped.

Elsewhere (11/3/16), the paper of record suggested that Chávez, López Obrador and Trump “are united in posing as the enemy of the entrenched, corrupt elite, who make possible whatever ails the people, be it Muslim refugees or global capital.” The formulation suggests that it’s just as specious and inflammatory to criticize the wealthy for enriching themselves at the expense of the poor as it is to scapegoat immigrants and religious minorities.

The neoliberal establishment’s attempt to cast Trump as an imported Latin American phenomenon continued after the election, with Vogue (1/27/17) crying “déja vu” and the Washington Post (1/27/17) warning, “Chávez, however evil, was not actually stupid. Neither is Trump.” In both cases, outlets were happy to cede the floor to Venezuelan emigres, who peddled these shallow parallels on the basis that policies are less relevant than “rhetoric.”

Refusing to accept that Trump and his European counterparts are the outcome of decades of class war waged by the neoliberal “extreme center,” corporate journalists like Carroll have found a new bogeyman in “populism,” dusting off the discredited horseshoe theory to equate diametrically opposed figures in an empty formalism.

As in his 2016 article, Carroll refused to let basic facts or journalistic standards get in the way of his “strongman” analogy. Indeed, the Guardian’s former South America correspondent came out of the gates shamelessly lying about Chávez and his three-term presidency: 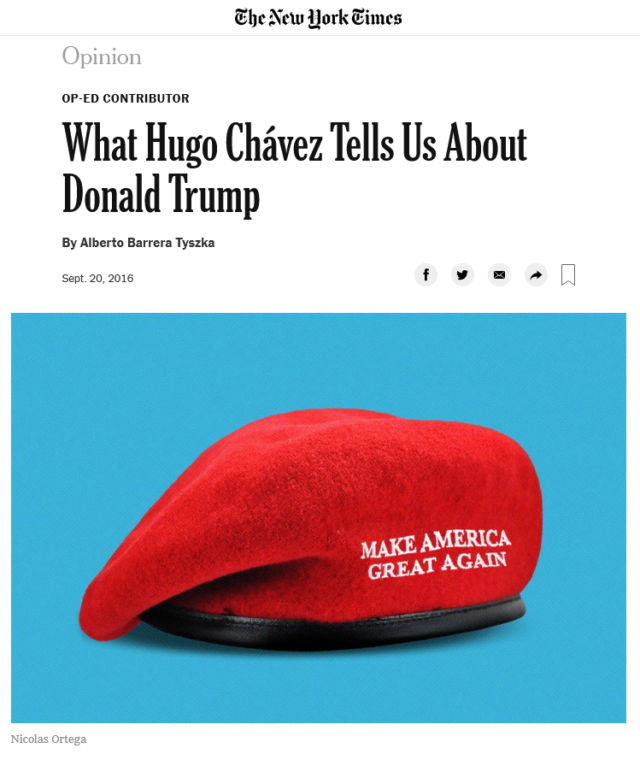 Equating Trump with an Official Enemy like Hugo Chávez is a popular way for establishment media to strike a faux-oppositional pose (New York Times, 9/20/16).

Between 1999 and 2012, Venezuela slashed poverty and unemployment by half, jumped from seventh to fourth in the region in human development, and reduced income inequality to the second-lowest in Latin America. While yearly inflation averaged 22%, this was a drop from 37% during the 18 years preceding Chávez.

Chávez and his mass movement achieved all these gains despite facing down a US-backed coup d’etat and oil lockout, which in the latter case led Venezuela’s economy to contract by 27% in the first trimester of 2003, causing poverty and unemployment to spike.

Scandalously, Carroll accused Chávez of creating a “narrative of elites out to get him,” suppressing any mention of the Western-sponsored opposition’s long-running destabilization campaign, which since 2002 has included coup attempts in 2013, 2014, 2017 and 2019.

This stunning omission allowed the Guardian journalist to denounce Chávez’s “authoritarianism,” accusing him of “building a state propaganda apparatus and cowing private outlets.”

The fact that Chávez (and his successor) won numerous democratic elections (FAIR.org, 12/1/06, 5/23/18),  and went to extremes to accommodate a violent, foreign-backed opposition with a stranglehold on corporate media (FAIR, 5/20/19) and the private sector, generally does little to dent this ideological claim, which has become an article of faith among Western liberals and leftists alike (FAIR.org, 2/12/20). 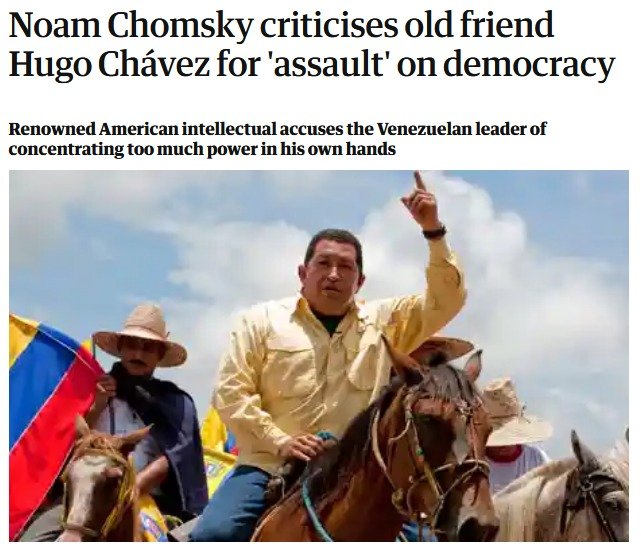 Noam Chomsky called this write-up of an interview Rory Carroll (Observer, 7/3/11) conducted with him “quite deceptive.”

This is hardly the first time that Rory Carroll—who reported from Caracas between 2006 and 2012—has slandered Venezuela’s Chavista government with glaring lies of omission.

Back in 2011, the Guardiancorrespondent interviewed Noam Chomsky , who had published an open letter to Chávez calling for the release of Judge Maria Lourdes Afiuni, for the Observer  (7/3/11), the Guardian’s Sunday edition. The judge was under house arrest, awaiting trial for ordering the release of a wealthy banker charged with multi-million dollar embezzlement.

Carroll reported that the renowned linguist and left-wing intellectual had “accused the socialist leader of amassing too much power and of making an ‘assault’ on Venezuela’s democracy.”

Chomsky later told journalist Joe Emersberger (Venezuelanalysis, 7/4/11) that Carroll’s article was “quite deceptive,” complaining that the Guardian had omitted his harsh criticisms of the US and its regional garrison state, Colombia, whose human rights records are “incomparably worse” than Venezuela’s.

The outcry at Carroll’s dishonesty was such that his newspaper was forced to release the full transcript of the interview (Guardian, 7/4/11), as well as modify the title of the original article.

Carroll’s decision to reheat his 2016 hit piece comes as the world confronts the deadly coronavirus pandemic. With decades of neoliberal social ravaging on full display in Western states, corporate journalists have scrambled to blame the multilevel crisis of the imperial core on the periphery, whether China (FAIR.org, 3/6/20, 4/2/20) or Venezuela.

Ideological mercenaries like Carroll have eagerly jumped at the opportunity to present  Trump’s criminally incompetent response to Covid-19 as a symptom of “populist” decay à la Chávez, rather than the modus operandi of a genocidal empire.

Carroll’s attacks on Chávez are outrageous, not only in light of the late president’s unprecedented popular healthcare initiatives and heroic role in disaster relief, but more importantly because they obscure murderous US economic warfare against the Caribbean country.

The Guardian’s message is clear: Venezuela’s collapse is the inevitable outcome of Chávez’s pathological “authoritarianism” and “dysfunction,” rather than two decades of unremitting US assault, including years of sanctions responsible for tens of thousands of deaths, which the “progressive” newspaper has been instrumental in justifying.

The Western media’s propaganda “playbook”—perfected by Carroll and his corporate colleagues covering Chavismo—was subsequently turned on Corbyn, Sanders and other Northern social democrats whose anti-systemic challenge was less revolutionary.

Yet, for all its overwhelming firepower and media smokescreen, Washington has repeatedly failed to achieve regime change from Caracas to Tehran, facing fierce resistance from peoples who prefer to die on their feet than live on their knees. The facade of US exceptionalism is ever more riven with cracks—in no small part thanks to Latin American leaders like Chávez. That is why, seven years after his death, he still needs crucifixion, journalistic ethics be damned.

Lucas Koerner is an editor and political analyst at Venezuelanalysis.

Ricardo Vaz is a political analyst and editor at Venezuelanalysis.