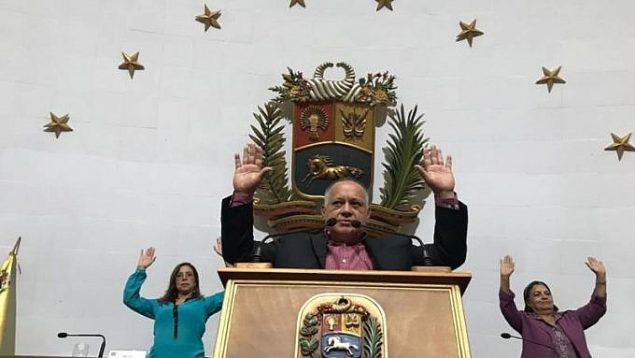 A measure that could pave the way for criminal proceedings to be brought against the opposition leader.

Venezuela’s National Constituent Assembly (ANC) has lifted the parliamentary immunity of the self-declared “Interim President” Juan Guaido, opening the door for criminal charges to be brought against him.

Tuesday’s unanimous decision came following a request from the Supreme Court, and included the “authorisation” of the continuation of investigations into the also deputy and president of the National Assembly.

“The investigation [against Guaido] is formally authorised to continue in accordance with our Constitution and laws” said ANC President Diosdado Cabello during the session. Cabello added that justice was “necessary” and what would safeguard peace in Venezuela.

The ANC based their move on article 200 of Venezuela’s constitution which gives the Supreme Court the unique power to rule over parlamentarians’ immunity from prosecution.

Guaido, who was chosen as National Assembly president in January 2019, violated a court-ordered travel ban on February 22 when he crossed into Colombia to lead efforts to force humanitarian “aid” across the border. He later attended a Lima Group meeting in Bogota and travelled to Brazil, Paraguay, Ecuador, and Argentina before returning to Venezuela March 4.

The travel ban against Guaido, as well as an asset freeze, were also reinforced by the ANC Tuesday, both extended “until the investigation [against him] is over.”

Two criminal investigations being led by the Attorney General’s office are currently open, one relating to his unconstitutional behaviour as a public official, and the other regarding his alleged role in what the Venezuelan government describes as sabotage against the electric grid which has led to rolling blackouts across Venezuela in recent weeks.

The opposition leader has also been barred from holding public office for 15 years by Venezuela’s Ombudsman Elvis Amoroso last month. Amoroso pointed towards alleged spending irregularities during Guaido’s time as a deputy.

Following the announcement, Guaido told his followers that the measure was “very serious” and asked them to show their strength “on the streets.”

“When I started this struggle in the student movement I didn’t have parliamentary immunity and we confronted the dictatorship on a daily basis,” he told reporters.

“This is simply the political response from some cowards who cannot even give an effective response to problems of water supply around the Presidential Palace,” Guaido claimed, promising to continue his struggle “come what may.”

Guaido has called his followers to carry out a “dry run” of what he has named “Operation Freedom” on Saturday, April 6. While further details are unknown, opposition leaders have claimed that it will bring an end to “the usurpation.”

Foreign governments which have recognised Guaido as Venezuela’s legitimate president also reacted to the lifting of his parliamentary immunity, with Spanish Foreign Minister Josep Borrell demanding that “[Guaido’s] freedom and physical integrity be respected.”

US officials also weighed in, with Florida Senator Rick Scott “warning” Maduro that the US “will not stand by” if something happens to Guaido. Fellow Florida Senator Marco Rubio claimed that any attempt to arrest the opposition leader would amount to a “coup d’etat” which would face “consequences.”

The recent statements echo previous warnings from US officials against any attempts by Venezuelan authorities to arrest or bring charges against Guaido.

Any effort to abduct @jguaido should be considered a coup d’ etat by every nation that has recognized him as the legitimate Interim President of #Venezuela. And anyone who cooperates with this should be treated as as a coup plotter & dealt with accordingly.

Tuesday’s ANC session also saw the approval of the 2019-2025 Homeland Plan (“Plan de la Patria”), setting forward a number of policies and goals to be achieved during President Maduro’s second term. The targets include reaching 5 million homes built by the Housing Mission, having 8,000 communes set up and extending the pension system to the entirety of the elder population.

The session also came on the heels of a minor cabinet shuffle on Monday. Maduro announced that he was activating a Ministry for Science and Technology, separating it from the Higher Education Ministry and nominating Freddy Britto Maestre as the new minister. But the most significant change was the replacement of Electricity Minister Luis Motta Dominguez with Igor Gavidia. Gavidia is touted as someone with extensive knowledge and experience in Venezuela’s electricity sector having risen through the ranks of the state-run electrical corporation, CORPOELEC.

Venezuela has suffered from a number of major power outages in March, affecting most of the territory, following what authorities have denounced as repeated cyber, physical and electromagnetic attacks against the electric grid and the country’s main electricity generator, the Guri Dam in the eastern Bolivar State.

The latest blackouts occurred on Friday and Saturday, with electricity being gradually restored throughout the country. Services such as water pumping and the subway and suburban trains in Caracas, which represent a large demand on the grid, have also been partially restored as of Wednesday.

Venezuela’s electric grid has been plagued by under-investment, lack of maintenance and emigration of qualified personnel, while previous and recent US sanctions have also compounded issues. Sanctions have stopped Caracas from getting spare parts and servicing equipment, shut down access to credit lines, and caused shortages of fuel needed to activate backup thermoelectric plants.

Edited and with additional reporting by Ricardo Vaz from Caracas.