Gilbert Doctorow’s ‘Does Russia Have a Future?’ 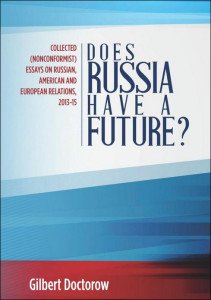 Dr. Gilbert Doctorow, a Brussels-based commentator on European and Russia affairs and the European Coordinator for the newly established American Committee for East-West Accord, has written a timely, eloquent, and, what is more, thought-provoking corrective to the reigning neoconservative and neoliberal pieties that so distort and undermine understanding between the former Cold war rivals.

Written during a nearly unprecedented time of tension between the U.S. and Russia this incisive, lively book documents, nearly in real time, the actions and words of some of the main players in the unfolding drama, frequently revealing the many (low) motives of a small coterie of Western opportunists and cynics who are largely responsible for bringing us to this perilous moment.

How did we, exactly, get to this moment? In 2009, the foreign ministers of Poland (the now disgraced Radek Sikorski) and Sweden (DC think tank fixture Carl Bildt) launched what is known as the Eastern Partnership project. The aim of this recklessly utopian project was to bring 6 of the former Soviet states into the European Union. This would be accomplished through a series of binding protocols – the EU’s acquis communautaire – which would – in effect – disallow these states from maintaining existing trade ties with Russia. Russia, not surprisingly, objected to the project when it came time for Ukraine to sign onto it in Vilnius in November 2013.

When the Russian President saw the writing on the wall, he proposed a tripartite agreement between Russia, the EU and Ukraine which would address Russia’s concerns over being, in effect, excluded from what, for them, heretofore had been a vitally important trade area. Putin’s tripartite proposal was rejected, Yanukovych spurned the acquis, protests erupted in Kiev, Yanukovych fled, and the war came.

But the war did not come, at least initially, from Russia. It came from an unelected government in Kiev, which opened fire on anti-Madian protesters in Mariupol (killing 9, wounding 50) and in Krasnoarmiysk (killing 2 at a polling station) in April 2014; this was followed shortly by the massacre in Odessa in which over 40 anti-government, pro-Russian protesters were barricaded inside a building and incinerated. By mid-May 2014 Kiev began a shelling campaign, terrorizing the civilian population of the breakaway regions (which continues to the present day).

For the hearty band of armchair militarists who are endlessly banging the drum for further American intervention in Ukraine, these are terribly inconvenient facts. Though facts they are, and facts they will remain.

And this brings us back to Doctorow and his book. What he has done is tackle, head on, a problem which “dare not speak its name” within the Beltway: that of the malign influence a claque of neoconservative and liberal interventionist “hawks” have on the conduct of American foreign policy. Policymakers like Samantha Power, Victoria Nuland, and Susan Rice, and activists and journalists like Bill Browder, Robert Kagan, Anne Applebaum (wife of the aforementioned Sikorski), Fred Hiatt, Anders Aslund, and many many others have joined forces to form a bipartisan War Party which seeks to exacerbate rather than defuse the conflict roiling the Donbas.

From the back cover of the book

They continually emphasize Russia’s culpability for the crisis, all the while doing their best to whitewash Kiev’s (and the West’s).

Yet the book’s main virtue is that, unlike the neocons he so effectively and ruthlessly castigates, Doctorow recognizes that “the hatred otherwise educated people bear for those who do not bend with the wind” is anathema to free debate and open inquiry.

I cannot possibly put it better than the author himself: “The fundamental premises of international relations which have been taken on faith for too long must be openly debated. Only then can we begin to address lost opportunities with Russia…and with many other powers as well.”

Because the war in eastern Ukraine still threatens to metastasize into a full blown war between Russia and the West, Doctorow’s message is all the more timely; that his book contains essential truths about how and why we got to his point makes it essential.

James Carden is a contributing editor to The American Conservative magazine and executive editor of eastwestaccord.com, the website of The American Committee for East-West Accord. He is a frequent contributor to The National Interest and Russia Direct. Formerly an advisor to the U.S. Department of State, he resides in Washington, DC.

‘Does Russia Have A Future’ is a collection of 62 previously published articles by Gilbert Doctorow. You can view the table of contents and read the brief introduction to the book here on Amazon.com.