All barracks and premises of the Bundeswehr will be searched after memorabilia commemorating the Nazi army, the Wehrmacht, were found at Franco-German brigade facilities during an investigation into an army officer suspected of plotting a false flag attack. 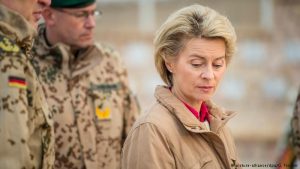 Volker Wieker, the chief of staff of the German Army, the Bundeswehr, has ordered that all barracks and buildings used by the military be searched, the German media reported on Sunday. The search for Nazi memorabilia will last until May 16, and the military command will be given a report on the preliminary findings by next Tuesday.

This week, collections of Wehrmacht propaganda posters, military awards, and iconic steel helmets were discovered at army barracks in the towns of Illkirch and Donaueschingen, both home bases of the Franco-German infantry brigade.

The Nazi memorabilia were uncovered during an ongoing investigation into Franco Albrecht, a 28-year-old first lieutenant who was allegedly plotting a hate-motivated terror attack. Investigators said the officer had been living a double life for more than a year, serving in the army while receiving state benefits under a bogus identity as a supposed Syrian refugee.

Albrecht’s plan involved targeting subjects on a “death list,” which included left-wing anti-fascist activists, according to Bild. If his plot had succeeded, his fingerprints, which are contained in a refugee database, would have led investigators to his false identity as an asylum seeker, thus putting the blame on migrants.

The German government said earlier that it would “leave no stone unturned” to establish how the officer, who reportedly has xenophobic views, managed to falsely register as a Syrian refugee, even with no command of Arabic.

Additionally, the Defense Ministry now maintains that the suspect did not act alone and was likely a member of a far-right network consisting of at least five people, Hannoverische Allgemeine newspaper reported.

According to Defense Minister Ursula von der Leyen, the suspect had speculated on how migrants would bring about the “genocide of the Western European peoples” in his master’s thesis. Though he was required to submit a different thesis, he received no disciplinary penalty for writing the first. The minister said an analysis of his papers leaves no doubt that he harbors “nationalist, racist and far-right views,”according to Sueddeutsche Zeitung.

In a subsequent comment to ZDF, von der Leyen asserted that the Bundeswehr has an “attitude problem” and “clearly has a weakness of leadership on several levels.” In a separate statement, she added that the troops must bear “collective responsibility” for the alleged far-right terror plot. That emotional remark infuriated military commanders, prompting over 100 generals and admirals to demand an apology.

General Harald Kujat, the German Army’s former Inspector General, told Die Welt that von der Leyen’s comments were “unacceptable and disgraceful” for the armed forces, adding that soldiers may steadily lose trust in political leadership. The opposition supported the minister, however. “Her stance on the Bundeswehr and the state of affairs there deserves respect,” said Klaus Ernst, vice chairman of the Left Party’s parliamentary faction, as cited by the newspaper.

“She is the only post-war minister to speak bluntly about the [far-right] problem in the armed forces,” he added.

Berlin orders barracks to be searched after Nazi-era symbols discovery

The head of Germany’s armed forces has ordered an inspection of all military barracks after Nazi-era memorabilia was discovered in two garrisons. The army is probing far-right sympathizers in its ranks.

According to the mass market Bild newspaper, Wieker sent around a memo last week asking army inspectors to hand in an interim report by Tuesday and complete the building checks one week later. “This examination covers all official properties, premises and offices under the army’s responsibility,” the directive said.

The move comes amid a deepening scandal over right-wing extremism among some members of the German military.

The controversy ignited last month after the arrest of a 28-year-old soldier stationed at a Franco-German base near Strasbourg who had expressed far-right views and was said to be plotting a terrorist attack disguised as a Syrian refugee. At his base at Illkirch in northeastern France, officials had found Wehrmacht memorabilia openly displayed in the common room without any apparent effort to remove it.

The Wehrmacht was the name of the Nazi regime’s army. Investigators looking into far-right sympathizers in the army later discovered similar Wehrmacht items at another base in the Black Forest town of Donaueschingen in southwestern Germany.

News magazine Spiegel reported on Saturday that a display case containing Nazi-era Wehrmacht helmets was found, as well as a room decked out with Wehrmacht memorabilia including pictures of soldiers, pistols, more helmets and military decorations.

A Defense Ministry spokesman said the objects found at Donaueschingen did not include Nazi items punishable under German law such as swastikas. However, on a visit to Illkirch on Wednesday, Defense Minister Ursula von der Leyen said she would not tolerate the veneration of the Wehrmacht.

With a federal election less than six months away, the Defense Ministry and the army are scrambling to contain the scandal. Von der Leyen, who is close to German Chancellor Angela Merkel, has demanded her generals show zero tolerance towards any extremist leanings within the ranks.

The minister has sharply rebuked the armed forces for leadership failures, criticizing “a misunderstood esprit de corps” that led superior officers to “look the other way.”

“This process of clarification demands courage and tenacity,” she told Bild on Sunday. “We must all support it, from the general down to the new recruits because it concerns the reputation of the Bundeswehr.”

Defense Minister Ursula von der Leyen wanted to show she’s not blind to problems among her own troops. In light of the most recent scandal, she openly criticized army leadership, saying the Bundeswehr had an “attitude problem.” But Bundeswehr officials found her comments to be outrageous. Their response to the defense minister’s criticism: “Leadership goes from the top down.”

Related:
The Bundeswehr’s image problem – is it overrun with right-wing extremists?, Deutsche Welle, May 5, 2017

The case of a German lieutenant suspected of planning a right-wing terror attack has unsettled both political and army leaders. The question of whether the Bundeswehr is a right-wing haven is as old as the army itself.

Numerous Nazi-era military awards, propaganda posters, and steel Wehrmacht helmets have been found at an army barracks in western Germany amid an ongoing investigation into an officer suspected of plotting a false-flag attack, Der Spiegel reports.

The bizarre discovery was made by Defense Ministry investigators in the town of Donaueschingen, which is the home base of the Franco-German brigade’s 292nd infantry battalion, the magazine reported, citing military investigators…

[In 1995, the elite Canadian Airborne Regiment of the Canadian armed forces was disbanded following revelations of sympathies with racism and fascism among regiment personnel. The revelations were sparked by the murder in 1993 of a young Somali man by members of the regiment. Details of that murder came to light and shocked Canadians. The brigade had been assigned to ‘peacekeeping’ duties in Somalia after regime-change Western intervention during the 1980s began a process of destruction of the country.

[A public inquiry into the Somalia scandal was initiated by the Conservative Party government of the day and it revealed grim details of the conduct of the Canadian military in Somalia. the inquiry was disbanded by the Liberal Party government under Prime Minister Jean Chretien that was elected in 1997. In 2015, a newly elected Liberal Party government cancelled an inquiry into the practice by Canadian soldiers in Afghanistan of rendering detainees for questioning to Afghan police and army agencies renowned for practicing torture. Defense Minister Harjit Sajjan is accused of a conflict of interest in that decision because he was serving as an officer in Afghanistan at the time.]