In early February 2016, German Chancellor Angela Merkel told a press conference in Ankara that she was “horrified by suffering under Russian airstrikes in Syria”. The occasion was a joint press conference with Prime Minister of Turkey Ahmet Davutoglu. At that very moment, Turkish jets and tanks were continuing their bombings of Kurdish towns and cities in eastern Turkey. 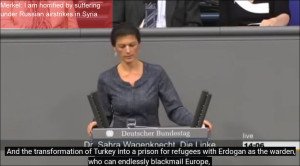 A response to Merkel’s hypocrisy was delivered in the German Bundestag several weeks later in a speech by Sahra Wagenknecht, deputy chairperson of Die Linke (The Left) party. You can view her five-minute speech to the Bundestag, with English subtitles, here on the YouTube channel of Russia Insider. Or click on the screen below.

“Mrs Merkel, you were horrified and outraged by the suffering caused by bombs. You said this after Russian airstrikes on Aleppo. And I agree with you that what is happening in Alepppo and its surrounding areas is cruel and barbaric.

“But we find surprising that your outrage and horror over barbaric wars appear only when Russian fighter planes drop their bombs. Do you really believe that deaths occurring from American, British or French bombs, with German Tornado [aircraft] support, are less cruel?”…