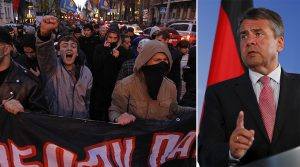 German Foreign Minister Sigmar Gabriel and his department have provoked a wave of indignation on social media by congratulating Ukraine on its independence day on Twitter using a well-known slogan used by WWII Nazi collaborators.

‘Slava Ukraini!’ is an infamous slogan used by the Ukrainian Insurgent Army (UPA) – a nationalist paramilitary group that actively collaborated with the Nazis in World War II, and was under the political leadership of the Organization of Ukrainian Nationalists led by Stepan Bandera. 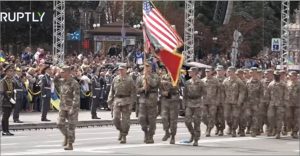 Ukrainian nationalists adopted gestures from the Nazis such as the Nazi salute, which was used while shouting ‘Glory to Ukraine!’ and ‘Glory to the Heroes!’

The tweet quickly provoked angry responses from many Germans on social media.

“Mr. Gabriel, you could not possibly tweet anything more stupid. Slava Ukraini is a Nazi greeting in Ukraine,” one person wrote.

‘Slava Ukraini’ is something similar to a person saying ‘Sieg Heil!’ in Germany… You have not fully gotten rid of the Nazi filth, have you?” another person said.

Some pointed out that “fortunately, the Foreign Ministry is not responsible for combating the [far]-right.”

“It’s a shame, of course, that it [ministry] is in charge of German foreign policy,” a reply to the ministry’s tweet reads.

There were, however, some people who sincerely thanked Gabriel for his wishes and his choice of words, praising them as a sign of respect for Ukraine.

Others expressed concern about Germany “returning” to its Nazi past. ‘Slava Ukraini’? You tweet a Nazi slogan? Should one be concerned about it? Germany back to its roots? I hope not!” one person wrote.

‘Slava Ukraini?’ A Ukrainian neo-Nazi salute from the Foreign Ministry? What next?” another person asked.

Sigmar Gabriel is known for his deep distaste for Nazism and far-right ideas. In an interview published before the 2013 parliamentary election, he revealed that he broke off all contact with his own father after discovering his [father’s] Nazi beliefs when he was 18. “When I see something unfair, when injustice is being done to people, I can get properly worked up,” he said at that time, as cited by the Guardian.

In 2016, a video emerged showing Gabriel giving the middle finger to neo-Nazis who tried to interrupt a regional election campaign meeting he was taking part in.

Meanwhile, the German Foreign Minister was not the only high-ranking western official who used the infamous slogan in his congratulatory statement this year. Canadian Prime Minister Justin Trudeau also sent his best wishes to Ukraine on its Independence Day by ending his statement with the slogan used by WWII Nazi collaborators. That apparently went unnoticed with the Canadian public. 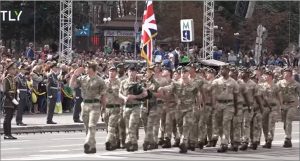 … It was the first time U.S. soldiers ever participated in Ukraine’s Independence Day parade.

… While Mattis acknowledged that the U.S. just recently approved giving Kiev $175 million worth of military equipment, he stopped short of saying whether the U.S. would supply Kiev with $50 million worth of anti-tank missile systems.

Crowd of several hundred along with Ukraine’s political and military leaders watch soldiers from the U.S., UK, Canada and other countries march through Kyiv on Independence Day, August 24, 2017.