From Canada to Bolivia with President Evo Morales 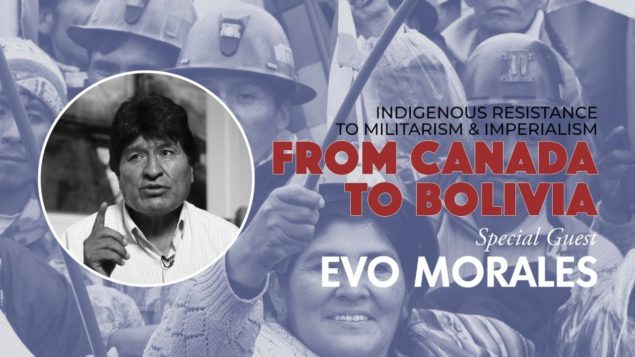 Hayden King: Hayden is Anishinaabe from Beausoleil First Nation on Gchi’mnissing in Huronia, Ontario. He is the Executive Director of the Yellowhead Institute and Advisor to the Dean of Arts on Indigenous Education at Ryerson University. Hayden has also taught at McMaster and Carleton Universities and the First Nations Technical Institute. Hayden’s analysis and commentary on Indigenous politics is published widely and he has served as an policy and negotiations advisor to many First Nation and Inuit communities. He is the co-founder of the Ogimaa Mikana Project and co-host of the Red Road Podcast.

Kanahus Manuel: Kanahus Manuel is a land defender and indigenous activist from the Secwepemc nation in British Columbia. As well as a mother of four, a member of the Secwépemc Women Warrior Society, and a traditional birthkeeper. Kanahus was born into a family of diligent freedom fighters and therefore has been involved in environmental and indigenous activist for many years at this point. works largely as a leader the with activist group Tiny House Warriors, the group was started in protest of the Trans Mountain pipeline by constructing 10 tiny houses in the route of the pipeline, which is non-consensually planned to go through Secwepemc territory. Kanahus was recently arrested in an excessive use of force by the RCMP resulting in the breaking of her wrist in a protest against of the Trans Mountain pipeline to protect the lands of her people.

Kolin Sutherland-Wilson: Kolin is of the Fireweed Clan within the Gitxsan Nation. He also belongs to the sovereign House of Tsi’basaa. He is currently embarking upon a journey to tell the story of colonization through film.

Gina Mowatt: Gina is of Gitxsan (Frog Clan) and settler ancestry and has been living on Coast Salish territories most of her life. She spends her time working toward anti-oppressive and Decolonial futures in her professional and personal life. She is currently pursuing a PhD in Child and Youth Care at the University of Victoria.