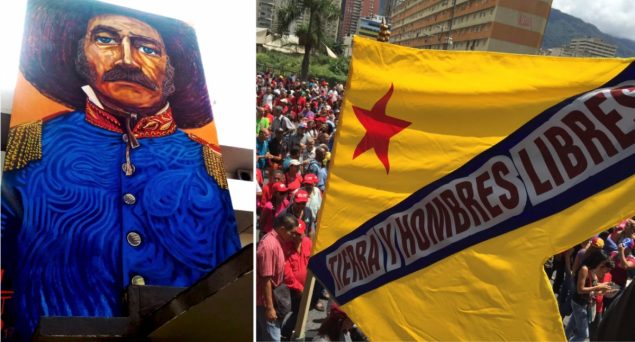 A vigil, a march and an assembly. VA writer Ricardo Vaz reports on the campesino struggles that are shaking Caracas.

We will find the people’s army.
We will follow this Ezequiel Zamora.
His horse’s trail will light our destiny.

“A historical claim with over 527 years of struggle, which had its apex under the battle cry of ‘Free men and liberated land! Horror to the oligarchy!’ (‘¡Tierra y hombres libres! ¡Horror a la oligarquía!’) with the ‘knife-faced’ general, one Ezequiel Zamora [1]. That’s what brings the campesino people to Caracas.” This is what Carlos Carles, an organiser from Caracas who is supporting the campesino struggle, and many others, told us during a protest in the agriculture ministry.

A year has gone by since the Admirable Campesino March, which saw dozens of campesinos march over 400 km to Caracas on foot to demand answers to the problems they face, and the injustices keep multiplying in the Venezuelan countryside. As a result, members of the Campesino Struggle Platform (Plataforma de Lucha Campesina) set up a vigil in the headquarters of the Venezuelan Land Institute (INTI) in Caracas at the end of June, demanding that the instructions issued by President Maduro during a televised meeting with campesinos on August 2, 2018, be fulfilled.

Zamora is a central figure in campesino struggles, in their flags and slogans. There is an unbroken thread of the poor from the countryside having their dignity stolen and their hopes betrayed dating back to Venezuelan independence. This longing for freedom found a leader in Ezequiel Zamora, and the bullet that killed him did not manage to silence the rebel cry “Oligarchs tremble!”, which would remain latent until finding a new voice.

Zamora, the “General of the Sovereign People,” was one of the historical figures claimed by Chávez, one of the three roots of the tree [2] that would become the Bolivarian Revolution. The symbolic role of Zamora can help us understand Chavismo as a project that revives and legitimates historical struggles of the oppressed in Venezuela. Campesino struggles do not embrace Zamora because Chávez recovered him. Rather, Chávez claimed Zamora because the struggles of Venezuelan campesinos are expressed in the historical figure.

“Campesinos are being evicted after years in the land. The law protects their rights over the land,” explained Jesús Osorio, spokesperson for the Campesino Struggle Platform, which has been leading the fight, during a popular assembly with social movements from Caracas. “Whatever belongs to the people we should not be begging for. We won’t make progress without demanding our rights with revolutionary conviction,” he concluded.

Osorio wrapped up by calling for a large mobilisation on August 2, to mark the one year anniversary of the arrival of the Admirable March in Caracas and reaffirming its demands.

One episode which summed up the increasingly tense relationship with the state was a demonstration in the Agriculture Ministry in Caracas on July 11. Around a hundred campesinos moved from the INTI vigil to stage a protest and demand a meeting with Agriculture Minister Wilmar Castro Soteldo.

Police quickly reacted and tried to dissolve the protest, talking to campesinos who gathered in nearby Plaza La Candelaria and mediating with ministry workers who agreed to receive a delegation. Once this was achieved, the police commander offered to “escort” campesinos to the ministry, something which they rejected, since they did not simply want a meeting. Their protest was symbolic and they wanted the people of Caracas to be aware of it. Amidst all that, the security forces’ main concern was half dozen horses brought by campesinos , which would, according to the police, be used to “stage a show.”

The discussion went on until emotions flared up. Campesinos broke a police cordon that looked to contain them and hurriedly marched, horses in tow, towards the ministry, while police officers tried to contain them. They arrived at the ministry with raised firsts and singing the national anthem, and after moments of tension the campesino delegation went in to meet with the minister. 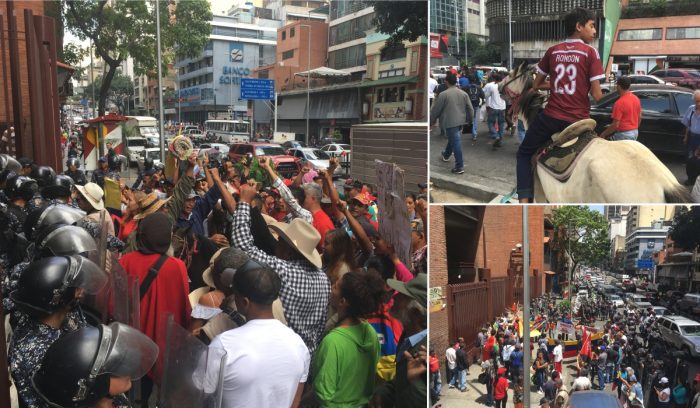 Campesinos held a demonstration at the Agriculture Ministry on July 11 and brought the cavalry! (Ricardo Vaz)

The mobilisation and vigil generated modest responses, with the (de facto) removal of INTI President Luis Soteldo, the reactivation of work tables with the vice-presidency and the resolution of some land claims in favour of campesinos. Nevertheless, an endless number of cases of access to land are currently on the table, alongside cases of judicial persecution of campesinos. As if on cue, on July 16, five days after the march, security forces went to the INTI to detain two campesinos following a complaint from a landowner who, days before, had evicted them, burning down their houses and crops.

Amidst the unsolved cases there are a few which have political baggage, touching the interests of governorships and mayor’s offices, or affiliated landowners. These are cases in which the Campesino Struggle Platform is looking towards the ministry, or Maduro himself, to find a solution.

A recent example of these injustices in the countryside is Los Tramojos landstead in Guárico State, 4800 hectares of plot handed by Chávez to campesinos in 2010. However, in 2016, the campesinos were evicted and the land assigned to a private landowner. After two years of a fruitless legal battle, the campesinos decided to occupy the lands once again, but their attempts were met by repression from security forces.

In this environment of struggle and mobilization, a positive and heartening aspect has been the mobilisation of Caracas’ popular organisations in support of the INTI vigil, the demonstration, and later taking part in this popular assembly. Fuerza Patriótica Alexis Vive, Encuentro de Lucha Popular, Movimientos de Pobladorxs/Inquilinxs, Ksa La Minka, Comunidades al Mando, and others, voiced their backing for the campesino struggle and their will to start unifying the different battlefronts.

“Campesino struggles are not foreign to us,” said Robert Longa, spokesman of Fuerza Patriótica Alexis Vive and El Panal Commune in 23 de Enero, stressing the need to build ties between campesino movements and popular power in the cities.

“Beyond bourgeois legality, our struggle is made legitimate by practice. We fight for land by taking it over, occupying it, moving forward with the battlecry ‘oligarchs tremble!’,” Longa explained, proposing the creation of production and defence brigades to advance the struggle in the countryside. He also argued in favour of initiatives to bring food directly to the cities so as to engage people again and change production relations.

El Maizal Commune was also present at the assembly. Addressing the assembly, spokesperson Ángel Prado stated that the priority needs to be occupying land and producing. Worrying about the “paperwork” comes later.

“There’s a reversal of Chávez’s agrarian policies underway. The Land Law is being killed,” he warned, highlighting cases of landowners and private businessmen being favoured in the countryside. “Let’s fight collectively so our victory is collective, as well as the output from the land,” he exclaimed, reaffirming El Maizal’s commitment towards building ties with other movements.

Prado concluded by lamenting the “blatant” alliance that the government is forging with the bourgeoisie, as opposed to the people. “The Revolution is ours and we will defend it, but we also need to hold our political leadership to account,” he said. 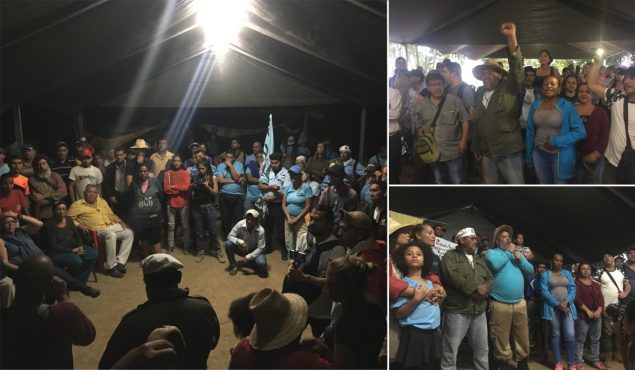 The vision that Agriculture Minister Castro Soteldo holds for the Venezuelan countryside need not be read between the lines, since he made it very clear in his TV show “Cultivando Patria.” “We have to move towards this revolutionary bourgeoisie,” he concluded based on a deeply misguided reading of communist intellectual Orlando Araujo’s 1968 essay “Venezuela Violenta.”

Araujo’s conclusion is precisely the opposite, that this productive bourgeoisie has failed to take shape, and that this is unlikely to happen in the Venezuelan context due to the very conditions of the rentier model. The industry that was eventually set up was never “fed” by the production from the Venezuelan countryside.

When asked about this revolutionary bourgeoisie idea, Carlos Carles replied that “the minister is peeing outside the pot” [“meando fuera del perol,” i.e. speaking nonsense]. Pressed for a more diplomatic answer, he told us that Castro Soteldo “is betraying this shit.”

The fight for Chávez’s legacy is crucial in the struggle for hegemony within Chavismo. And this is not an issue to be solved with a “Chavistometer,” measuring who can profess loyalty the loudest.

There are questions to be debated. There are some who claim there needs to be a return to the “original” version of Chávez, or the “pendejo” [“idiot”] version in Chávez’s own words. Likewise we could discuss if privatisations and the frantic opening towards private capital are a necessary concession. We do not believe so, but an argument can be made in defence of this position. What is not possible is to present them simultaneously as something consistent with Chávez and as progress.

Now, what is undoubtedly a brazen betrayal of Chávez’s legacy is to take away land from campesinos, in some cases handed by Chávez himself, in order to assign them, or return them, to latifundistas [latifundios are large, and often unproductive, land estates].

However, campesinos have demonstrated that they will not abandon their (class) struggle, even if that demands marching for more than 400 km on foot. Thus, step by step, alliances are being forged with other movements in urban and rural settings alike. The challenge is to go on accumulating strength and fighting for a Venezuelan countryside defined by free men and women and liberated land, and horror to the oligarchy.

[1] Ezequiel Zamora was a revolutionary leader in the so-called Federal War of 1859-63. With land reform as one of their main flags, Zamora’s forces won decisive victories moving from western Venezuela towards Caracas, most notably in the Battle of Santa Ines. Zamora was killed by a bullet to the head in 1860, with the origin of the bullet remaining a mystery to this day. [2] When outlining his political vision in his famous 1991 political manifesto known as the “Blue Book,” Chávez talked about a “three-rooted tree,” with (independence hero) Simón Bolívar, (Bolívar’s companion and tutor) Simón Rodríguez and (19th century revolutionary leader) Ezequiel Zamora as ideological references.