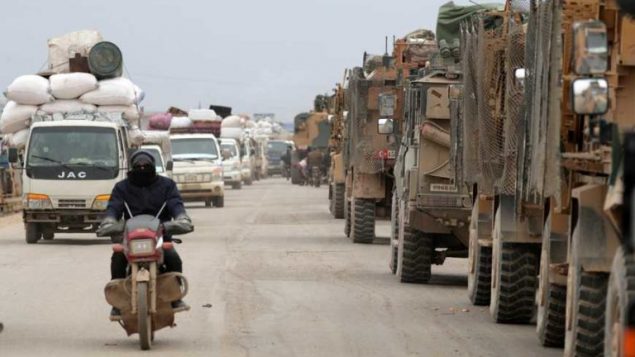 Turkish President Tayyip Erdogan has confirmed his intention to meet with the leaders of Russia and France, Vladimir Putin and Emmanuel Macron, as well as German Chancellor Angela Merkel, on March 5 in Istanbul, to discuss the situation in Idlib.

On February 23rd, Erdogan said that Macron and Merkel suggested that Putin hold a four-sided summit on Syria in early March.

Earlier, Russian Foreign Minister Sergei Lavrov said that Turkey was unable to fulfill several key commitments to solve the problems around Syrian Idlib. In particular, she did not dissociate the armed opposition from the terrorists, ready for negotiations with the government of Bashar al-Assad in the framework of the political process.

On the evening of February 22nd, Erdogan made his customary warning that large-scale military action may be undertaken by the Turkish army if the Syrian Arab Army (SAA) doesn’t stop its offensive in Idlib.

He has vowed such action several times so far, and the SAA appears to be undeterred, all the while Turkey is deploying large numbers of military vehicles and equipment to Idlib, but they appear to be leading to little effect.

But, Erdogan admitting that such a meeting would take place means that a large-scale Turkish operation is unlikely to take place before that day, if at all.

The Russian and Turkish military are in constant contact on the situation in Syria, the Kremlin spokesperson Dmitry Peskov said.

If the necessity rises, Turkish President Recep Tayyip Erdogan and Russian President Vladimir Putin will get into contact over the situation.

According to him, due to the aggravation of the situation in Syria, the past week “turned out to be extremely restless.”

“Naturally, the offensive actions of the terrorists could not go unanswered. The Syrian military, being in their own country, on their territory, naturally responded, which led to extreme tension. Thank God, our military, Russian and Turkish, are in constant contact , and, as we see, if necessary, the presidents will join in the discussion of this topic,” Peskov said.

Earlier, the Russian Reconciliation Center said that pro-Turkish militants, with the support of Turkish artillery, broke through the defenses of the Syrian army in the area of Kminas and al-Nayrab. Russian Su-24 fighter jets attacked the terrorists and destroyed one tank, six infantry fighting vehicles and five pickups. Turkey stopped its artillery attacks after Russia spotted them.

Peskov also noted that the President of Russia paid great attention to this issue.

“The situation remains tense. You know that this week the president devoted a lot of time to the situation in Syria. And, let’s say, the crisis situation around Idlib, in particular,” Peskov explained.

Separately, Peskov also, once again, underlined that Turkey was not fulfilling any of its commitments under the Sochi agreements.

According to him, Turkey has not yet fulfilled the conditions reached at the Sochi agreements, militants in Syrian Idlib are armed and receive ammunition, ammunition and equipment.

“In this case, we can clearly say that the conditions of the Sochi agreements, which were signed by the two presidents more than a year ago, have not yet been fulfilled, and it was said that Turkey would have to ensure the withdrawal, demarcation, withdrawal of heavy weapons and so on,” Peskov explained.

According to him, at this stage, the militants in the Syrian province of Idlib are “wonderfully armed” and also seem to receive the necessary equipment, ammunition and ammunition.

“Very dangerous units of military equipment fall into their hands. And all this, unfortunately, does not contribute to the normalization of the situation,” Dmitry Peskov emphasized.

Despite that, Peskov said that there was no place for any “grim” forecasts in the relations between Ankara and Moscow.

According to him, one should not “fall into gloomy moods” and “build extremely negative scenarios” regarding relations between Russia and Turkey after the aggravation of the situation in the territory of the Arab Republic.

Diplomatic discussion will continue happening, and Germany and France will be involved, in addition to Russia and Turkey.

Events have been unfolding so far in recent days with regard to Turkey’s military involvement in Syria we have selected a range of articles below, which we consider the most relevant and informative.

Shadow of war: What are the odds Turkey will start a full-scale offensive against Syria in Idlib?

Turkey’s Strategy Is Pushing It Into A Corner