Four million people in Damascus have been without safe drinking water supplies for more than a week after springs outside the Syrian capital were deliberately targeted, the United Nations said on Thursday. 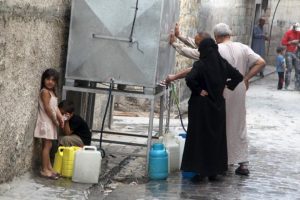 Water supplies from the Wadi Barada and Ain al-Fija springs which serve 70 per cent of Damascus and its surroundings had been cut, the UN’s Office for the Coordination of Humanitarian Affairs (OCHA) said.

OCHA said in a statement that supplies had been cut because “infrastructure was deliberately targeted and damaged”, without saying who was responsible.

The Wadi Barada valley is a rebel-held pocket of territory northwest of Damascus that the Syrian army and its allies have been trying to recapture in an offensive that started last week.

A resident and rebels in the area said air strikes had damaged a water pumping station. The government accused rebels of polluting the springs with diesel, forcing authorities to cut the supplies on Friday and use reserves instead.

A Damascus resident said each neighborhood only gets water for about two hours a day and bottled water prices had increased dramatically on the open market to more than double the cost at state-subsidised grocery stores.

“The UN is concerned the water cut could lead to diseases transmitted through dirty water, especially in children, in addition to the extra financial burden for families,” OCHA said.

“(People) are having to purchase water from private vendors, where prices and water quality are unregulated,” it said.

Wadi Barada lies on a road from Damascus to the Lebanese border that is a supply line for the powerful Iranian-backed Hezbollah group, which is heavily involved in fighting alongside Syrian President Bashar al-Assad’s army.

Government forces have been bombing the area heavily for a week, though the Syrian Observatory for Human Rights said there was a lull on Thursday before the air strikes resumed.

The rebels in Wadi Barada have allowed government water authority engineers to maintain and operate the pumping station and supply Damascus since they took control of the area in 2012.

Fighters have, however, cut water supplies several times in the past to put pressure on the army not to overrun the area.

The UN called on all sides to reach a peaceful settlement to reduce civilian suffering and avoid targeting infrastructure.

OCHA said 15 million people needed help accessing water across Syria after nearly six years of conflict and households were spending up to a quarter of their income on water.

ALEPPO, SYRIA – Earlier today, state-run SANA reported that the Islamic State terror group had cut off the water supply from its main processing plants on the Euphrates.

Up to this point, there had been an agreement to leave the water unaffected by the war. The residents of Aleppo will now be forced to depend upon local water wells and water bottles until the situation is resolved.

Notably, Aleppo water supply is piped from the Euphrates (likely Assad Lake reservoirs) to the Suleiman Al-Halabi Plant where it would be distributed from to Aleppo’s populated districts.

The UN has warned that four million people in the Syrian capital city of Damascus have been deprived of safe drinking water supplies for over a week after springs outside the city were deliberately targeted.

The UN’s Office for the Coordination of Humanitarian Affairs (OCHA) announced in a statement on Thursday that water supplies from Wadi Barada and Ain al-Fija springs in northwest of Damascus which serve 70 percent of the population in the city have been cut after “infrastructure was deliberately targeted and damaged.”

“The UN is concerned the water cut could lead to diseases transmitted through dirty water, especially in children, in addition to the extra financial burden for families,” the statement said. “(People) have to purchase water from private vendors, where prices and water quality are unregulated,” it said.

Each neighborhood in Damascus reportedly gets water for about two hours a day and bottled water prices had increased dramatically in the free market.

According to the OCHA, 15 million people across Syria are in need of help to access water and households spend nearly a quarter of their income on water.

The Syrian army and its allies have been conducting an operation to liberate the Wadi Barada valley from terrorists since last week. The government says the terrorists have polluted the springs with diesel, forcing authorities to cut the supplies on Friday.

The terrorists in Wadi Barada have cut water supplies several times in the past to prevent the Syrian army from recapturing the area.

Last week, the Ministry of Water Resources and the Ministry of Local Administration ordered authorities in the provinces of Rif Dimashq and Damascus to start using water reserves until the problem was resolved.

Syria has been the scene of a foreign-backed crisis since early 2011. UN Special Envoy for Syria Staffan de Mistura estimates that over 400,000 people have been killed since the onset of the militancy. The UN has stopped its official casualty count in Syria, citing its inability to verify the figures it receives from various sources.

Residents of Mhadzha village of Daraa Governorate ready to join to the reconciliation process, Inside Syria Media Center, Dec 30, 2016