Four killed in London, 230 killed by U.S. airstrike in Mosul

BEIRUT – Approximately 230 people are reported to have been killed in what is thought to have been a U.S.-led coalition air strike on an ISIS-held neighbourhood in Mosul. 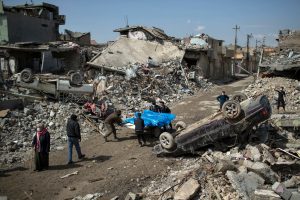 A correspondent for Rudaw, a Kurdish news agency operating in northern Iraq, said that 137 people – most believed to be civilians – died when a bomb hit a single building in al-Jadida, in the western side of the city on Thursday [March 23]. Another 100 were killed nearby. “Some of the dead were taking shelter inside the homes,” Hevidar Ahmed said from the scene.

A spokesperson for Central Command, which coordinates U.S. military action in Iraq, told The Independent they were aware of the loss of civilian life as reported by Rudaw and the information had been passed on to the civilian casualty team for “further investigation”.

“[The U.S.-led coalition] takes all reports of civilian casualties very seriously and assesses all incidents as thoroughly as possible. Coalition forces work diligently to be precise in our air strikes and ensure that all strikes comply with the [internationally agreed] Law of Armed Conflict,” Captain Timothy Irish said. 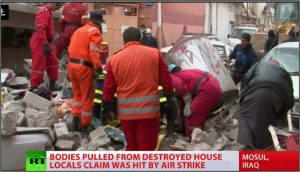 Rescuers pulling scores of bodies from apartment bldg in Mosul bombed by U.S. warplanes on March 23, 2017 (screenshot from RT.com)

A daily assessment report from Central Command stated that five strikes near Mosul on Thursday [March 23] had destroyed five ISIS units and a sniper team, as well as 11 fighting positions, vehicles and artillery equipment. No other fighting force in the country has the capability to launch an aerial attack of the scale reported.

Iraqi coalition ground forces, backed by a U.S.-led coalition bombing campaign, began the gruelling Operation Inherent Resolve to remove ISIS from Mosul in October 2016. The jihadi fighters now hold onto approximately a quarter of the city on the western bank of the River Tigris that cuts through Mosul from north to south.

An estimated 400,000 Iraqis are trapped in the remaining ISIS-held areas, the UN’s refugee agency said on Thursday. Those caught up in the fighting face growing food shortages or being hit by crossfire if they try to leave. ISIS has used civilian homes to shelter fighters and weapons throughout the battle for the city, rigging buildings and streets with explosives to impede Iraqi troops’ progress.

The fighting has come at a heavy price for both Mosul’s residents and Iraqi soldiers: thousands of Iraqi civilians have died in the fighting, and a cumulative total of more than 200,000 displaced from their homes. At least 6,878 civilians were killed in violence mainly inflicted by ISIS around the country last year, the United Nations Assistance Mission to Iraq (UNAMI) has said.

Many Mosul residents report their loved ones have died as a result of “friendly fire” rather than ISIS’s warfare tactics. AirWars, a UK-based non-profit monitoring the effect of anti-ISIS air strikes on civilians, said last week that they believed 370 civilians died in U.S.-led coalition bombing in the first week of March alone.

Over the border in Syria in the last week, the U.S. has been accused of killing civilians in two separate bombing incidents: 33 died in a strike near Raqqa which was supposed to target ISIS positions, and more than 50 after a strike hit a mosque in Aleppo province rather than an al-Qaeda meeting point.

Removing ISIS from Mosul, which is Iraq’s second largest city, will effectively spell the end of ISIS as a land-holding force in the country, driving the remnants of the group back to their de facto capital of Raqqa. While losing the city will be a decisive blow, the jihadi organisation is expected to pose a renewed threat in the form of an insurgency war against Iraqi forces.