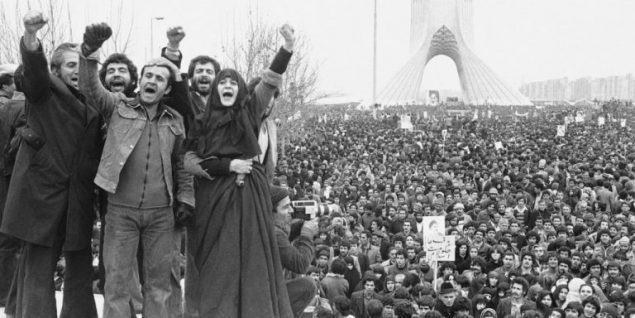 This February marks 40th anniversary of Iranian Revolution. 1979 Iranian Revolution—having overthrown the last king of Pahlavi dynasty Mohammed Reza Shah Pehlavi—had led to religious establishment. Iran became ‘Islamic Republic of Iran’. A lot is being talked about how ‘Islamic Republic’ has survived and lived a long period of forty years. There is no doubt that post-revolutionary Iran has seen many turbulent days. People of Iran have come on the street several times and expressed their anguish. However, they have not often been categorical in their demand and questioned the legitimacy of the religious establishment. On the other hand, every time, Islamic Republic has stood muscular. What is the reason behind this? The answer lies in the ideology of Islamic Republic of Iran. It has been devised so formidably and derived so prudently (from Shiite Islam) that to question the same one needs to put himself on risk in terms of politics as well as religion. Therefore, let us take this opportunity to understand the nucleus of this ideology and discuss as to how exactly Iran turned into an ‘Islamic Republic’.

The success of Iranian Revolution is largely endowed to the failure of Shah. In mid 1970s there were immense international as well as domestic pressure on the Shah to relax police controls and human rights violations, bring in reform and social justice, allow freedom of expression and individual liberty. 1979 Revolution was, therefore, the greatest movement of Iran for freedom, individual liberty, protection of human rights, accountable and constitutional government, freedom of press and so on.

It was Cold War period when the revolution took place. At that time Iran was a close partner of USA. Although Iran was never formally colonized, it always remained under the influence of colonizers. Iran’s Shah was nothing but the police of West or USA in the region.

The regime had suppressed all sections of society. Apart from censors on freedom and human rights, Shah’s sponsored westernization (sometimes called westoxification) had led the erosion of Iranian culture, weakening of Iranian nationalism and loss of sovereignty. This, consequently, fuelled the popular grievances and therefore popular rage against the regime. Therefore, participation in the movement came from all strata of society. People did not flock under one ideology. Rather, they came from many groups. Ideological and political opponents included remnant members of Mosaddegh’s National Front, Marxist-Leninist groups such as Tudeh Party, Islamic Marxists such as Mojahedine-Khalq Organization, Intellectuals, Bazaris (merchants) or petty bourgeoisie and many others.

Hence, the question which is to be asked here is that how the revolution eventually went into the hands of ulema. How the clergy class became leaders of the revolution. And, how Iran turned into an ‘Islamic Republic’.

This is pertinent to mention here that Pahlavi dynasty, like previous regimes, had also embraced Shia Islam as its state religion. However, it did not allow it to emerge as a center of power. The Shah never co-opted clergy class. Thus Shah’s continuous efforts to erode the power base of the Shiite establishment (which had always been co-opted in previous regimes and enjoyed enormous power in the society) caused widespread disquiet among clerics and ultimately resulted into the rise of Neo-fundamentalist School of Thought (which believes that ulema are not to sit idle and just supervise the society, they are rather to be the executors of the Islamic ordinances and therefore required to be in politics) led by Imam Khomeini. Hence, ulema also stood against Shah and participated in the revolution very actively. Rather, they succeeded in becoming the leaders when the revolution was on peak.

During the period leading to the revolution, democratic and secular forces such National Front (led by Karim Sanjabi and others) and many more tried to propel the movement with the hope of bringing in democracy and constitutional government. However, they could not build up the movement on this plain. They once again failed to succeed, as they (secularists and democrats) had twice in the past—1906 Constitutional Revolution and nationalization project of Mossaddeq in 1951-53.

On the other hand, clergy class succeeded in consolidating themselves. It is worth noting here that Shah’s intelligence SAVAK had cracked down on every organization and their activities. They had suppressed all forms of political gatherings. But, it could not infiltrate into mosques where ulema used to organize their meetings. This worked as an impetus for clergy to rise and lead the movement.

It is significant to note that during entire period leading to the revolution, Imam Khomeini kept speaking and writing from his exile (Turkey, Iraq, and Paris), which emboldened his supremacy. His writings and speeches used to be smuggled in Iran and widely distributed among common masses. He, unlike others (secularists or democrats), had a blueprint in his hand. He not only categorically explained how to stand against the Shah but also defined the form of government (Islamic Government) based on his theory of velayat-e faqih—Guardianship of the jurisprudent, which he proposed to be established after Shah was overthrown.

In Shiite tradition there was a dominant school of thought called ‘quietist school of thought’ led by leading mujtahid Ayatollah Mohammad Hussein Burujerdi. This school of thought believed that Shiism demanded quietism and submission to the authority i.e. until the return of twelfth Imam, mujtahids (the most learned of the ulema, who were expert in shariah law) were supposed to guide people in the matter of religion. They were ethical guide to the community and there was no scope for them to indulge in active politics.

However, after the death of Burujerdi there emerged two schools of thought reacting against this quietist school of thought. One is ‘Neo-fundamentalist School’, which is identified with Ruhullah Musavi Ayatollah Khomeini, born on 24th Sep. 1902, in the village of Khomein, sixty kilometers away from Tehran. The other one is ‘Reformist-Modernist School’ which is associated with the leading moderate ulema such as Ayatollah Murtuza Muttahhari and others.

Thus, Imam Khomeini led the ‘Neo-fundamentalist School’ which believed that only guiding the community would not fulfill the responsibility of ulema. After Ayatollah Burujerdi (the leader of quietist school of thought) died in the early 1960s, Khomeini gained space in the society. He, then, openly called for active participation of clerics in politics. He specifically wrote about it and appealed to the clergy to give up the belief in sitting idle. While opposing white revolution (a serried of reforms announced by the Shah) in 1963, he got an opportunity to launch his line of thinking. His followers including his students came out on the street and demonstrated the strength of clergy class. With Khomeini’s charismatic entry, it became evident that clergy class had given up its belief in remaining just a guiding entity and rather decided to embrace politics. Thus, this development emerged as a threat to the Shah. Hence, resultantly, the Shah exiled Khomeini to Turkey on 4th Nov. 1964 and thereafter to Iraq (in Nov. 1965) and then to Paris (in October 1978). However, about fifteen years of exile gave Imam Khomeini an opportunity to speak up openly against the regime. Throughout his stay in Iraq he continued speaking and writing against the regime and mobilized the people of Iran. Significantly, he also wrote about the scheme of government which he was dreaming of to establish. Apart from other writings and speeches, his thirteen speeches delivered during his stay in Najaf (Iraq) from January 21 to February 8, 1970, which have been compiled in the name of Governance of the Jurist, is the major source of his thought regarding reconstruction of Shiite Islam. It is in fact the foundation of his theory and ideology upon which Islamic Republic of Iran is built on.

Thus, Khomeini believed that Islam was not limited to worshiping. He argued that the appointment of the successor (caliph of the prophet) itself proves that the Prophet himself emphasized the inevitability of the governance. For him, presence of law (shariah) is itself more than enough to prove that there must be an executer. In his book, Governance of the Jurist, he says that, “Law requires a person to execute it……after a law is established, it is necessary also to create an executive power…….thus Islam, just as it established laws, also brought into being an executive power”.

Hence, seeing the revolution progressing to its success, the Shah left Iran on 16thJanuary 1979. Khomeini returned to Iran on 1st February 1979. He was welcomed by millions of Iranians on the street. On 11th February Imam Khomeini appointed Mehdi Bazargan as interim prime minister, hence formally declared the end of monarchy. A referendum was held on 31st March 1979 to declare Iran as Islamic Republic with an Islamic government i.e. velayat-e faqih (Guardianship of the Jurisprudent). The newly proposed constitution included an ‘Islamic Jurist’ (Vali-e Faqih)—Supreme Leader—which was adopted in November 1979 and none other than Imam Khomeini himself was instituted as Supreme Leader.

Thus, the ultimate power was vested with Vali-e Faqih, who was considered to be above every institution of the nation (including, president, parliament, judiciary and army), in order to rule in the name of God and implement shariah. The final authority, hence, rests in Supreme Leader and therefore the entire apparatus of the nation runs in his name.

Some more photos of the period thanks to akeratos of Delphi blog:

Photos: Iran marks the 40th anniversary of the 1979 Islamic Revolution