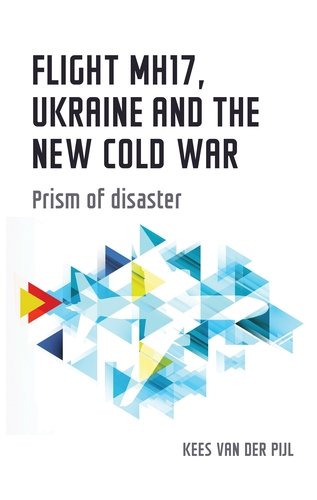 Flight MH17, Ukraine and the new Cold War Prism of disaster: this book by Kees van der Pijl offers an analysis that challenges the Western consensus surrounding the events

Flight MH17, Ukraine and the new Cold War: Prism of disaster is essential background reading on events surrounding the Malaysian Airlines Flight MH17, which was shot down on 17 July 2014 amidst unrest in Ukraine, a conflict that led to a NATO-Russia standoff and the onset of a new period of East-West confrontation.

The first scholarly work on the Ukrainian unrest and the tragic downing of MH17, this book offers an analysis that challenges the Western consensus surrounding these events, emphasising the geopolitical and economic context of the West’s standoff with Russia, the BRICS bloc, and the struggles over the EU’s energy supply.

Based on previously unpublished government and NATO documents as well as a wide array of sources this book offers an analysis of global political economy and contemporary debates about Russia and East-West relations.

To purchase a copy of this book, click on this link to the Manchester University Press

Based on wide-ranging meticulous research, van der Pijl utilises the case of the downing of MH17 as a prism to refract the political corruption of state-directed oligarchic capitalism in Ukraine coupled to the self-interest of a neo-liberal driven European Union. He offers a masterly analysis of the complex domestic personal relationships and class forces involved in the breakup of Ukraine and the wider Soviet bloc, and concurrently the clash by foreign interests for material assets. The discussion of the downing of MH17 is based on a wide range of sources and provides the best available case study of the topic. Van der Pijl’s research raises controversial conclusions both about the validity of the process, the conclusions of the investigation of the crash and the wider motivations of the principal interests.

This is a book which can be recommended to students of contemporary capitalism, of the transformation of the socialist block as well as to those concerned with contemporary international affairs. It builds a convincing case of instances of collusion, misrepresentation, ‘fake news’ and lying underpinning the actions and policies of Ukrainian leaders and Western interests. There is a chilling message in the book – the propensity to resort to force and military action – which should worry all citizens. This is a book which deserves to be widely read and its uncomfortable conclusions will be intensely debated by students.”

‘Providing an essential counterpoint to the dominant post-Soviet narrative – that neoliberal capitalism brings democracy and prosperity – Kees van der Pijl blasts his way through decades of western myth-making to expose the brutal reality: that America’s drive for global domination continues. And as the US falters economically it uses its raw military power to enforce an unchallenged unipolar world – its goal is neoliberal global governance backed by full spectrum military dominance and US nuclear primacy. But powerful political and economic forces are working to resist this never-ending US expansionism. Van der Pijl reveals the latest stages in this global struggle, this new cold war, in a forensic and captivating account, centred on the conflict in Ukraine – a microcosm of the current global crisis.”

A must for anyone studying the origins of the new Cold War. A profound analysis of the geopolitical context of the Ukrainian civil war. The book is well written and highly accessible. It contains a lot of material that did not find its way to the Western main-stream press. Van der Pijl shows how especially Western involvement transformed Ukrainian internal struggles into a conflict between NATO and Russia. The book is a valuable contribution to the debate about the recent history of Ukraine.”

Kees van der Pijl has succeeded once again. Revisiting the downing of Flight MH17 in order to develop a macro-analysis of the contemporary global political economy, Flight MH17, Ukraine and the new Cold Waris a magisterial work that demystifies the contemporary discussions on Russia and East-West relations. Rich in insight and information – bringing together history, political economy and geopolitics – it will certainly impact current debates on international politics.”

The downing of flight MH17 on 17 July 2014 over Ukraine marks a rupture in post-Cold War international politics. In this meticulously detailed study, Kees Van der Pijl deftly and expertly places the tragedy in the larger context of the onset of a new period of East-West confrontation, while at the same time providing an expert analysis of the event itself. The book courageously stands against much conventional thinking, and thus provides a necessary corrective to stereotypes. This is essential reading for analysts and above all policy-makers.”

An incontrovertibly important book. Not an investigation into the MH17 catastrophe per se, but rather an explanation for the anti-Russia campaign that unfolded afterwards. Through the prism of the MH17 disaster, van der Pijl provides the broader historical context that led up to the tragedy, and how it continues to reverberate with us today. He argues that we should not view it as an isolated accident, but “place it in the context of a wider confrontation, the one pitting the liberal West against a loose contender bloc.” . . . van der Pijl’s neo-Marxist theoretical perspective, and willingness to use a case study as an illustration of broad global trends, is reminiscent of the classic writings of the late Gabriel Kolko. It is no exaggeration to say that this book is unlike any other currently available on the MH17 tragedy.”

Numerous questions in connection with the MH17 disaster remained unanswered because they were not asked by Dutch officials and media. By sifting through circumstancial and ignored evidence, Kees van der Pijl gives us in this most up to date account probable and possible answers about this geopolitically momentous matter.”

Professor Kees van der Pijl’s MH17, Ukraine and the New Cold War will be long regarded as a landmark in both geopolitics and global political economy. He has convincingly demonstrated that we are now in a new Cold War, after the global financial crisis of 2007-08, starting with the collapse of Lehman Brothers in September 2007. .Washington has continually interfered in the affairs of a weakened USSR, an interference that became blatant in the case of the successor states of the Soviet Union, especially after the promulgation of the Wolfowitz Doctrine that the USA must in future remain the sole superpower with overwhelming economic and military superiority, and all instruments for achieving for achieving it, including unprovoked wars were legitimate means for attaining that end.
I expect this book to be a must-read for all students of international relations and global political economy.’

Kees van der Pijl is both an eagle and a truffle hunter. Like a truffle hunter he reconstructs in great detail the downing on 17 July 2014 of Malaysia Airlines Flight 17 over eastern Ukraine, killing 296 passengers and crew. Like an eagle he situates this catastrophe in the much broader picture of the Soviet Union’s disintegration and the concurrent NATO and EU expansion. Van der Pijl’s well-written study does not give a definitive answer to the question “who did it?”, but helps us immensely to understand the context of this tragic event.”