Fidel and Che, in photos

The following is a three minute slide show of historic photos of Fidel Castro and Ernesto ‘Che’ Guevara together. 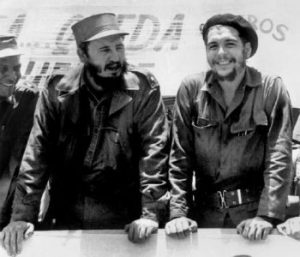 Che Guevara and Fidel Castro were two of the 82 guerilla fighters who set sail from Mexico on November 25, 1956 on board the small ship Granma. Together with rebel forces in Cuba proper, they were launching the Cuban Revolution to overthrow the dictatorship of Fulgencia Batista.

The Granma landed on December 2. Only some 20 of the fighters survived the landing due to the dictator’s military having discovered their landing. But three years later, the rebel guerilla forces and the urban insurrectionary movement in Cuba triumphed and overthrew the Batista tyranny. A new Cuba rose from the ashes of the impoverished, U.S. client state that Cuba had become under the dictator.

Che Guevara, an Argentine by birth, died in combat in Bolivia in 1967, fighting to extend Cuba’s revolutionary example to the rest of Latin America. Fidel Castro died on November 25, 2016, defying imperialism to the end and honored by the remarkable country and people of social progress and internationalism that Cuba had become.