International concert pianist Valentina Lisitsa traveled to Donetsk in June 2015 to perform a public concert. She also met with civic leaders, and she met with young pianists and other musicians to offer them advice and guidance. She performed an evening concert in the city of Donetsk on June 22. 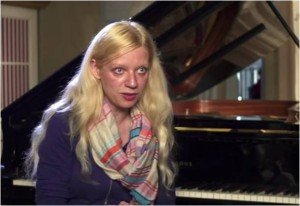 Earlier during the day of her concert performance, Lisitsa gave a feature interview to the ‘Aurora’ television program. The interview was facilitated by the Ministry of Culture of the Donetsk People’s Republic. T

The concert commemorated the 73rd anniversary of the beginning of the catastrophic invasion by Nazi Germany in 1941against the peoples and government of the Soviet Union, including Ukraine.

The interview with Valentina Lisitsa on Aurora is wide-ranging. She describes her early musical career and the commercial success she eventually achieved by going around the prevailing classical music industry channels which often block talented artists from achieving their due recognition.

Lisitsa describes her background growing up in southern Ukraine, Odessa region. She is the daughter of a Ukrainian father and Russian mother, with Ukrainian, Russian and Polish grandparents. “How can I be divided into parts [by intolerant Ukrainian nationlists],” she asks at one point during the interview.

She describes the rise of the Maidan movement in Ukraine in 2013 and early 2014. She says that she initially supported the goals of EuroMaidan but soon saw that it came to be dominated and controlled by intolerant, right-wing nationalism.

“Euromaidan when is started—now everyone tells a lie, that it was against Russia, against Putin—no, it was for Europe.”

“Of course, I know how good it is in Europe. The corruption there. [EuroMaidan] is so naïve. But naivete and hope for a brighter future is not a crime. A crime is when they start killing in order to reach their brighter future.”

Lisitsa describes her outspoken opposition to the war by Kyiv in eastern Ukraine and the price she has paid for her outspokeness–alienating and losing friends, banned by the Toronto Symphony Orchestra from playing two scheduled concerts in April 2015, being labeled an apologist for the Russian government and a “propagandist” for the cause of “separatism” in Donbas.

She reflects on the rise of fascism in Ukraine and elsewhere in Europe. “There were many reasons for me to come to Donbas [for the June 22 concert]. Firstly, as with many people living in the West of Ukrainian or Russian origin, we follow what is going on here and recognize that this is the front line in a civil war. We are united in our souls with the citizens of Donbas because they are the one who have found strength… They have not given up…

“We must look at the truth frankly. Seventy years later [after the end of the Great Patriotic War], fascism is lifting its head, and not only in Ukraine. It lifts its head in Ukraine because the West shuts its eyes and turns away. There is the same problem in countries in the West.”

Lisitsa says the Ukraine in which she grew up was tolerant and accepting. “We [Russian speakers] learned Ukrainian, we read Shevchenko, Lesya Ukrainka, Mark Vovchok–all noted writers in whose literature there was no hatred… We did not divide people into Russians, Ukrainians and mixed nationalities… What is happening today is Bandera nationalism, preaching blood purity and other ideas of fascism. This is what is happening now.”

The final question asked of Lisitsa is her message to the people of Donbas and Ukraine.

“To the people of Donbas, I say, ‘Don’t give up. You are fighting for all of us. Public opinion is changing in the world. It is changing more slowly than we would like, but we are working on that. You have many, many people in the world who feel for you… I hope there will be peace and we pray for peace’.”

“To the people of Ukraine, that other, inseparable part of me…We have to consider the matter and realize we have a common enemy. It is fascism, it has been brought here, imposed on us. We have a common history, common culture… A false history been fabricated by a group of traitors who divide us by race.”

“It is time to wake up. I hope this nightmare will end soon.”

Watch the full interview with Valentina Lisitsa here, or by clicking the screen here: