Mourners gather in Kyiv on April 19, 2015 for funeral of Oles Buzina

Buzina was gunned down in the streets of Kyiv on April 16. He received many death threats in the preceding months.

A four-minute news report on 1 TV in Russia captured the raw emotions of those attending the service. They had harsh words for the Ukraine government and the descent into murderous political violence which it has brought to the country. Watch the news report here (subtitled in English), or you can click on video screen further below.

Here are four photos from the funeral service for O. Buzina at Kiev-Pechersk Lavra Cathedral that day. And here are photos of people attending the commemoration for him. 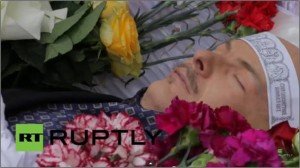 On April 13, Buzina gave an interview to Vesti TV in Ukraine. It turned out to be his last interview. Read excerpts of the interview as translated by Irena Raicevic, here on Slavyangrad.org.

Also on Slavyangrad.org is an open letter by Oles Buzina to U.S. ambassador in Ukraine  Geoffrey Pyatt dated January 24, 2015. The letter comments on the rising Maidan movement violence in the city center of Kyiv, apparently encouraged by Pyatt and the government he represents. The letter concludes, “The less U.S. officials interfere in the internal affairs of Ukraine, the faster it will be counted as one among the SUCCESSFUL countries of the world.”

The killing of Oles Buzina has been condemned by the International Federation of journalists. It is calling for a full and impartial investigation. An article published on Strategic Culture Foundation several days ago summarizes Ukraine’s frightening descent into political violence.

Since last year, Ukraine has become one of the most dangerous countries in the world for journalists to work. And in the past several months, a string of opposition politicians have died in mysterious circumstances. Authorities are calling many of the deaths “suicides”.

Opposition political parties are being banned in Ukraine and extreme-right and fascist paramilitary squads are being merged into Ukraine’s army, National Guard or police forces.

The war in eastern Ukraine has cost more than 6,000 lives during the past year, according to United Nations figures. Thousands more deaths have gone unrecorded.

Read also:
Who is behind the killings of journalists in opposition politicians in Ukraine?, by New Cold War.org, April 21, 2015

Here is Ruptly TV footage of the commemoration service for Oles Buzina, in Kyiv on April 19, 2015:

Here is the 1 TV news report of the commemoration service for Oles Buzina in Kyiv on April 19, 2015: